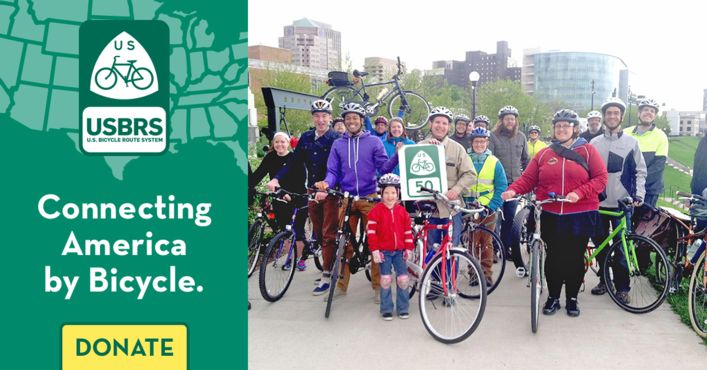 The U.S. Bicycle Route System (USBRS) is a developing national network of bicycle routes connecting urban and rural communities via signed roads and trails. Created with public input, U.S. Bicycle Routes direct bicyclists to a preferred route through a city, county, or state - creating opportunities for people everywhere to bicycle for travel, transportation, and recreation.

Over 18,000 miles are currently established in 34 states and Washington DC – and many routes are signed.

Since 2005, Adventure Cycling has been proud to shepherd the growth of the USBRS. We provide free technical assistance, coordination, and resources to assist stakeholder groups in their designation efforts.

Together, we're building the largest public bike route network in the world!

Adventure Cycling Association is proud to announce the designation of two new U.S. Bicycle Routes in Arkansas and Tennessee. Authorities also approved the realignment and extension of additional routes in Minnesota, New York and Ohio. These new routes add almost 425 miles to the U.S. Bicycle Route System, bringing it to nearly 19,000 miles in total!

Adventure Cycling Association is proud to announce the designation of three new U.S. Bicycle Routes in Oklahoma, Minnesota, and Delaware, and the realignment and extension of additional routes through Indiana and Michigan, adding more than 650 miles to the U.S. Bicycle Route System taking it over 18,000 miles!

Adventure Cycling Association is proud to announce the designation of U.S. Bicycle Route 1 in Maryland and the realignment of routes through Florida, Michigan and Ohio, adding nearly 150 miles to the U.S. Bicycle Route System and improving connectivity and the cycling experience.

MILWAUKEE, WI — The Wisconsin Bike Fed and DNR are teaming up to bring more awareness to U.S. Bike Route 30.

THE CENTER SQUARE – Historic Route 66 in Oklahoma is one step closer to becoming a part of the U.S. Bicycle Route system, which is expected to bring additional sales tax revenue to cities on the route.

JACKSON, Wyo. — Jackson town councilors agreed to sign a letter to the Wyoming Department of Transportation (WYDOT) in support of US Bicycle Route 76 running through town on local pathways and streets.

INDIANA - Sitting outside a century-old confectionery in southern Indiana, Jim Schroeder popped a piece of candy into his mouth and laid out my future. After cycling along country roads that could moonlight as an airport runway, we would climb a succession of hills before coasting into Bloomington, the halfway point of our 122.5-mile bike ride.

CLEVELAND, Ohio -- Imagine starting a bike ride on the Towpath Trail and pedaling all the way to Pittsburgh, Washington, D.C. or even Atlanta.

A new frontier is opening for bike travel. A growing network of designated routes is being pieced together across the nation along low-traffic roads, trails and bike lanes by the same association that designates Interstate highway numbers. The American Association of State Highway and Transportation Officials (AASHTO) established the U.S. Bicycle Route System in 1978. However, it’s only recently begun to take shape.

Eighteen new bike routes in five states have recently been designated, adding nearly 3,000 miles to the U.S. Bicycle Route System, a developing complex of officially recognized, publicly-accessible travel paths across the country. The latest routes — in California, Indiana, Ohio, Utah, and Washington State — represent the largest addition to the bike network to date, both in number and total mileage.

Just as Northwest Arkansas capitalized on built-in advantages to become a mecca for mountain biking, officials both public and private think Central Arkansas and the Delta could benefit from road cycling’s rising popularity. And in the case of USBR 80, the allure of cycle touring.

OHIO - Did you know that Ohio has a strategic statewide bicycling network?
It’s called the State and US Bike Route System (S/USBR), and it’s made up of more than 3,000 miles of on- and off-road bike facilities that connect over 400 communities across the state.

WASHINGTON – The American Association of State Highway and Transportation Officials (AASHTO) and the Adventure Cycling Association signed a Memorandum of Understanding (MOU) formalizing their longtime partnership to expand the U.S. Bicycle Route System (USBRS) for a seamless travel experience across the United States.

Carlsbad, CA is the latest city to approve designation for the 1,000-mile USBR 95 along the Pacific Coast.

Communities in Iowa are starting to rally behind the state's first U.S. Bicycle Route.

The Lancaster City Council unanimously supported the designation of U.S. Bicycle Route 85 through California, and plans to improve the bike lanes which the route follows.

December 26, 2018
Arcata joins the effort to designate USBR 95 in California

With the city of Arcata signing on to designate U.S. Bicycle Route 95 along the California coast, nearly half of all jurisdictions have indicated support for this iconic route!

"Cave Country Trails believes getting a U.S. bike route would lure more adventure tourists to the area." The group finalized work on the 110-mile U.S. Bicycle Route 23 in Kentucky, which now awaits official approval from AASHTO.

U.S. Bicycle Route 66 is breathing life back into small communities along the "Mother Road." CityLab takes a look at what the designation means for Missouri and Kansas, and the effort to connect the route across the country.

In Lorain County, Ohio, community members see their connection to the U.S. Bicycle Route System as a way to highlight all the cycling opportunities in town and in the region.