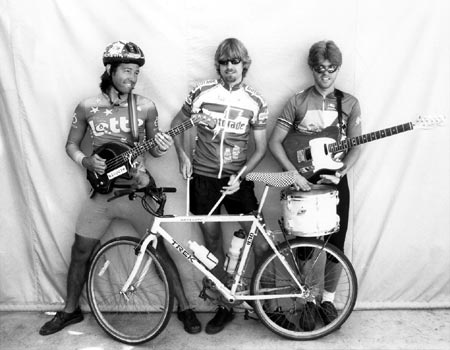 Bicycle, a rock band riding from New York to Seattle, stopped by in August, of 1995, to talk with us before spinning off to their next gig. The band was comprised of Adventure Cycling member and lead singer Kurt Liebert, guitarist Brian Chenault, and drummer Forrest Kemper. Brian's mother, Kathy Chenault, followed in a van with the heavy equipment.

The three musicians left the Big Apple pretty much on a whim in June of 1995. They had a definite booking in Princeton, but for the remainder of the tour they called clubs on their way into town.

"You have to call most clubs at least five times to get their attention," said Liebert.

And even then, many clubs weren't interested. Undaunted, the trio still managed to play consistently across the country. The weather did more to slow them down than unfriendly club managers. They were in Chicago at the height of that city's heat wave, and one day waited five hours in an air-conditioned Burger King to escape the oppressive temperatures.

"A bar of soap in my panniers melted," recalled Chenault.

As distances between towns grew greater in the West, the band members began to tire somewhat from the demands of riding and rocking, but their shows remained entertaining and energetic.

"When we get to Seattle, I'm going to drop," said Chenault, as Bicycle prepared to hit the road again after our interview. They still had 50-plus miles to go that day.