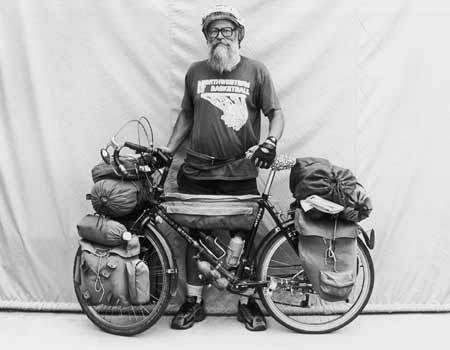 Adventure Cycling member Bruce "Ole" Ohlson of Pittsburgh, California, has a bachelor's degree in philosophy, so it's no surprise that he came up with this quote regarding his lifetime total of 84,500 loaded touring miles: "It's not that bicycling is so important, it is that everything else is equally unimportant."

In 1999, Ole rode across the United States again, from Seattle, Washington, to Boston, Massachusetts, in 115 days, with only two, as he puts it, "unfortunate incidents": 1) he came down with Giardia in Idaho and 2) he lost his front panniers to thieves in Wyoming. And as this was being written, Ohlson was making plans for his tour of South America. He planned to leave in October 2000 and return in March 2001.

"Take care. Keep the dream alive," said the wandering Ole at the end of his letter to Adventure Cycling.

All may be unimportant, but at least all is not lost.