Solo on the GAP Trail: Forest Bathing, Stories, and Delights 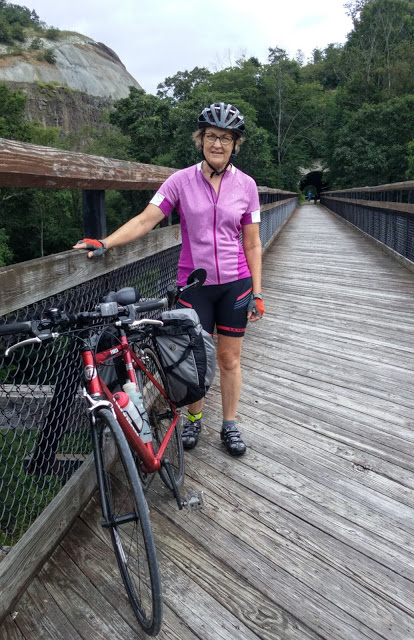 This past August I cycled 130 miles over four days on part of the Great Allegheny Passage (GAP) — a 150-mile rail trail between Cumberland, Maryland, and Pittsburgh, Pennsylvania. It’s been 30+ years since I toured by bike solo, and at age 65, I’m delighted to find I still like it: making up a trip as you go, free of someone else’s plan.

I don’t know what “forest bathing” officially means, but I’m calling my trip “forest bathing” because for most of my ride, I had an awning of trees, a significant river on one side, and a forest and walls of rock on the other side — often with waterfalls. I learned I was along some of the most beautiful country of the GAP Trail, and I was sometimes in Pennsylvania’s most visited state park — Ohiopyle on the Youghiogheny River (yaw-ki-ah-gay-nee ), a mecca for whitewater boaters.

A parallel Amtrak route has stops in some of the towns and bike spots on the train can be reserved for $20. I initially planned to start and park near the Cumberland, Maryland train station and maybe return by train from Pittsburgh. I had an Amtrak reservation knowing that the eight bike spots fill up and that I could cancel with a 48-hour notice. I didn’t know how far I’d cycle each day or how many days I’d travel, my maximum would be six days, but I had two reservations for lodging. I  loved the assurance of having Amtrak as an option.

I must mention the fear that accompanies the prospect of a solo adventure. Will I be better off with a group or tour? Will I be lonely? As I considered the trip, possible companions appeared and disappeared to include my 23-year-old son newly into cycling. Fortunately, a cycling friend was emphatic, “You can do this alone.” So I did. And I think I will try another trip, maybe on the road, maybe camping, maybe with others. Who knows?

It certainly helps that the GAP Trail feels like a supported tour with maps, booklets, and info about history, lodging, restaurants, bike shops, etc. And there are no cars. 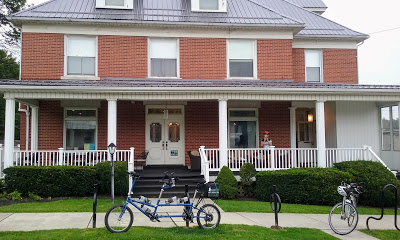 When I arrived in Meyersdale, Pennsylvania for my start, I meandered the town and found myself attracted to Yoder’s Guest House with its grand front porch and cyclists hanging out there. Yoder’s had an extra room and I decided to take it.

On the porch, I met cyclists Tom and Cindy and several of their friends. They all appeared to be in their 60s except for Chelsea, a 26-year-old daughter who’s not cycling and schlepping their luggage from town to town in a van.

Tom and Cindy were riding a folding tandem. Tom, a former marathoner, has an early stage of Parkinson’s and one shoulder is locked up from a recent surgery. Because of Tom’s shoulder, Cindy was riding “captain” for the first time. They’re having balance issues dismounting because of Tom’s shoulder or maybe the Parkinson’s. So they’re falling often as they get off the bike — not so good. Cindy was on YouTube seeking dismounting ideas and found a hilarious video, Tandem Bikes Are Worse Than Ikea. Don’t miss it! 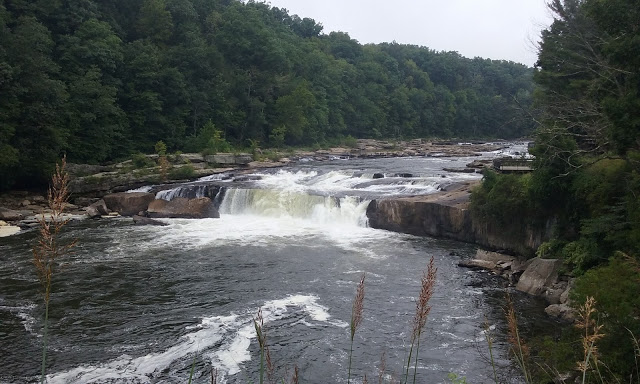 I cycled the first day to Ohiopyle, and along the way, stopped in Confluence — where the Casselman and Youghiogheny Rivers meet — and checked out the recommended River’s Edge Café.

When I got to Ohiopyle, the bike mechanic and guide for Wilderness Voyageurs pointed me to Falls Market for coffee. The market owner was chatty and pointed me to a news story about 26-year old Colleen O’Neil, a local (who works for Wilderness Voyageurs) who recently raced in the Tour Divide race from Canada to Mexico in 25 days and was the second-place female. It’s self-supported over gravel and dirt roads for 2,700 miles. Colleen chose a single-speed bike so she wouldn’t have to repair gears.

Here is Colleen O’Neil’s story, her bloody noses and all. And I figure out that Colleen’s husband, Montana, is the bike mechanic I met, and he has a great website about living cheap and touring the world by bike. 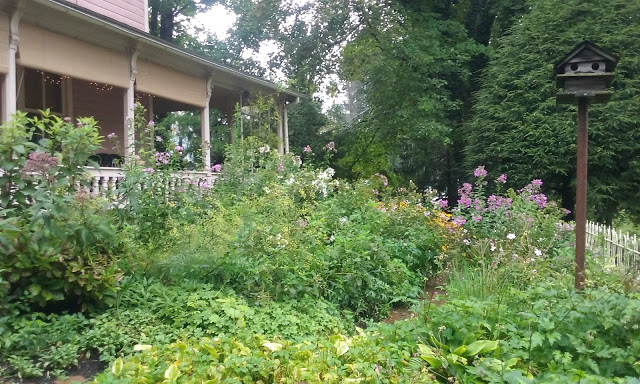 As I cycled up a steep hill to my second booked lodging, the Hummingbird’s Nest Guest House, I decided to walk. I asked a man and a young boy for help finding the street, and it was only when I said the name of the guesthouse, that the boy exclaimed, “I can show you! It’s the trailer.”

I later learn the blond six-year-old is the grandson of the not-a-trailer home owner and I had the house to myself which faces the state park. I see four hummingbird feeders nearby when I leave the next day — along with all the bees, some the size of hummingbirds, vying for the feeder’s sweet liquid.

If you stay in Ohiopyle you can enjoy whitewater river rafting or take a shuttle to one or both of Frank Lloyd Wright’s homes — Fallingwater and Kentuck Knob. It turns out Ohiopyle is where white-water boating started after WWII with rubber dinghies from the war.

At the GAP visitor center, “Ed the Hiker” recommended a new small hotel, Cobblestone Inn, in Connellsville that’s north on the Yough River. When I got to Connellsville, I checked out the town by bike, and later found a restaurant that turned out to be a new venture, Ravu — Italian, family-style with outdoor seating and great food.

Later, in the still-light evening, I sat on the hotel’s patio overlooking the Yough River and begin reading the one book I carried, My Name is Lucy Barton by Elizabeth Strout. It’s an eerie page turner. Lines stick with me, “And that was when I learned that work gets done if you simply do it.” “No one comes from nothing.” An artist “must be ruthless.”

Instead of returning by Amtrak, I decided to spend more time riding, and the trail is worth seeing twice, so I began my return back toward Ohiopyle where I figured I’d be able to find a place to stay on a weekday. When I’m eating on a bench along the river, a man traveling solo struck up a conversation. He’s a local and is going in the same direction. So I learn about Dale. 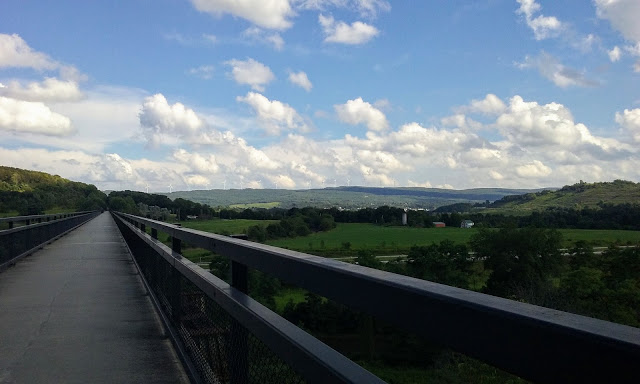 Dale retired from 40 years of coal mining three years ago and said that 34% of the fuel used in the U.S. is coal, although the numbers continue to go down. It’s just a matter of time before solar and wind further displace coal, he said. In his current home, he installed a heat pump and solar panels to dramatically reduce utilities, and his next car will be electric, at which point he’ll add a windmill. And I did see a fair number of windmills at different points. Dale said he’s done well for a coal miner; he would’ve liked to work a few more years, but his back isn’t so great.

Dale suggested I stay in the B&B next to the River’s Edge Café in Confluence — which I had visited earlier. I luckily got a room and shared the small 1890s home, delightfully furnished, with a porch that overlooks the river. I heard the soothing river all night through the open windows.

In the morning, it rained heavily with thunder at times. Mist hung over the river and I hung out until 11:00 AM on the porch of the café before beginning my ride.

Finally Rockwood appeared and I cycled up a hill to find caffeine and diversion on the main street. The former mill has a café, bakery, shops, antiques, and an operational opera house.

I saw three cyclists lunching on pizza, and Barbara introduced herself and them. They’re part of a group of seven from central Pennsylvania. They parked in Cumberland, Maryland and took the train to Connellsville, and rode the 90 miles back. The sun returned and we all moved to outdoor tables to dry out.

I liked how casual the Pennsylvania group was about their trip. Barbara wore water shoes vs. bike shoes, or even shoes with stiff soles. It appeared they have only had one water bottle cage, but maybe another water bottle was packed in a saddlebag; two bottles are recommended since it can be hard to find water on the trail.

As I cycled the last miles to Meyersdale and my car, I was definitely ready to get off the bike. Riding earlier in the day is better. I found myself trying the GU (goo) that racing cyclists talk about — a packet of gelatinous amino acids, salt, and sometimes caffeine. It tasted decent, watermelon and sea salt, and, even better, I felt my energy rise.

Margaret is biking more after ending a 37-year career in the U.S. civil service in 2015. She was a public affairs officer for the U.S. Army.

I found this blog a little late, but thankful for it. I've done a section of the Gap from Cumberland to Confluence with someone else, but I'm single now and considering doing the next section solo. I was feeling a little skeptical about it, but reading your blog I feel inspired that I can do it and it will be okay. Thank you for posting your story

Hey Chris, I'm going to do a solo GAP/C&O Towpath ride the week after Memorial Day. Since it's my first time I used an outfitter to arrange the accommodations along the way. Depending on when you ride rooms may be scarce. However, next time I might make the arrangements on my own. Good Luck on your adventure.

Margaret, thanks for writing about your trip. As I retired widow I am hoping to ride the GAP this spring. I have the guide book but was hoping to just wing it. I also will be traveling solo and am tired of people telling me I can't. Thanks for telling me I can! Wouldn't mind here more about how your adventure went. Did you go all the way to Pittsburgh?

Margaret, thank you for telling your story of the Allegheny Passage.....I live in Eastern Canada.....I ve read about the this trip for many years, hoping one day I will do it....2 years ago, I got the chance to do it with my 35 years old son...from Pittsburg point zero to 20 miles before reaching Washington....what a nice oppotunity .....talk with my son for 7 days....choosed where we would stay for the next night ....no stress, sound of water, birds, met deers, time stopped .....what a beautiful feeling.....I can t wait to do another trip similar.....

Your description made me remind my trip....thank you