Rock It Out, Rookie

March 22, 2018 - Olivia Round blogs for Adventure Cycling every month. 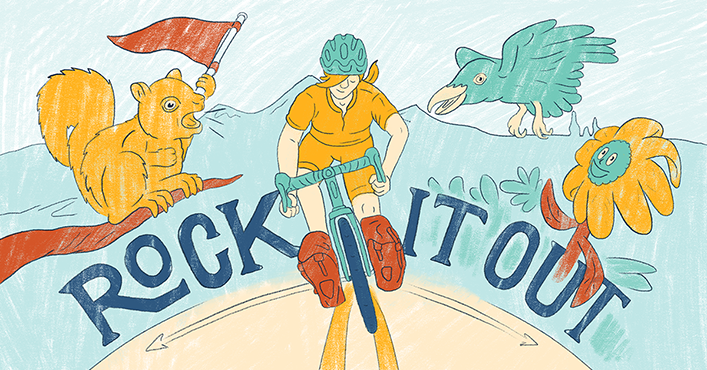 For the life of me, I could not figure it out: Every time I tried to stand up in the pedals to climb hills on my fully loaded touring bicycle, it felt like I was going to fall over. With quaking quads and shaking knees, I’d sit my butt back down in defeat. I was carrying nearly forty pounds of food, water, camping supplies, and repair tools on my 30-pound steel vintage Miyata. I needed the extra leverage of standing up, and yet I couldn’t make it happen. Not even on the truly steep stuff.

I remember that fifth day of my first-ever bicycle tour, when I was cranking my way up a mountain pass in Oregon. I panted and strained, with sweat running down my jawline, pushing on the pedals while keeping my butt firmly in the saddle.

Another touring cyclist, an older man, suddenly zoomed downhill past me, fully loaded with touring gear, and shouted, “Stand up! Rock it out!” He was gone in a flash but I knew what he’d meant: stand up in the pedals. And I couldn’t do it.

It didn’t bode well. This was the first week of a long, ambitious cross-country bike tour, and I’d probably bitten off more than I could chew. I’d gotten a wild hair back in January to ride my bicycle across America, from Oregon all the way to Florida, and I was obsessed. Obsessed, but not fit.

I hadn’t trained. Since becoming obsessed with bike touring, I’d spent most of my time in a sedentary position. All winter I’d sat at my computer trying to focus on college assignments, distracted by reveries about my upcoming adventure. All summer I’d sat at a desk, working as an outdoor program coordinator for my university by day and desperately shopping for the necessary bike touring gear by night. The only “muscle” that I’d worked on a regular basis was my brain.

But I had a plan: I’d train on the road. Rather than putting added pressure on the preparation period (which was stressful enough between finding the right bike, tent, shoes, panniers, route, etc), I’d simply take it easy for the first couple weeks on tour. I’d cycle no more than 30 miles per day during the first week, and just 50 miles per day the second week. After all, I was taking the entire semester off from college to complete this adventure. I could go slow and let my body adjust. I had nothing but time.

Which was a good thing, because I was going very, very slow up McKenzie Pass. Sweat dripped down my chin as I cranked determinedly up the quiet mountain switchbacks. My bike computer reported a laughable pace of three miles per hour. It was a marvel that I was even upright.

Then, just as I realized this, I fell over. My bike tipped slowly towards the roadside ditch as the world turned sideways, and I soon found myself beneath my bike at the side of the road, my front tire spinning listlessly in the mountain air.

I wriggled out from beneath the heavy steel frame as a car drove past, with young faces pressed to the window. I flushed with shame. Wildflowers lowered their heads at the side of the road. Squirrels giggled to themselves in the trees above. As I hoisted my bike upright and began to pedal, a raven cackled brazenly at my efforts. To the whole world, I looked ridiculous. A new kind of liquid began to trickle down my chin: tears of frustration.

I will get the hang of this one day, I vowed. I will stand up in the pedals. I will ‘rock it out.’

It took months to fulfill that promise. I cycled up McKenzie Pass, and then Rattlesnake Grade, Lolo Pass in Montana, over the Continental Divide in Wyoming, and even up into the Rocky Mountains of Colorado without my butt ever leaving the saddle. My poor knees. They did an amazing job.

It wasn’t until Missouri’s Ozark Mountains that I finally succeeded. By then, I’d been adopted by a rag-tag gang of fellow touring cyclists, all headed in the same eastern direction as me. Being part of a group transformed my solo trip into a moving party: there was a couple from North Carolina, two friends from Colorado and Philadelphia, and a delightful, inspiring young man from South Korea, who spoke very little English and was cycling across America by himself. Our group of six had assembled in Kansas, and we were now tackling Missouri’s toothy Ozarks together.

“Stand up! Stand up!” came the familiar cry from Joey. He was an accomplished cyclocross racer from Charlotte, and knew what he was talking about.

“I’m trying!” I yipped back, familiar tears boiling at the corners of my eyes. The steep hill loomed in front of me, and I felt like I was at the bottom of a well. But then, in the midst of my frustration, I looked up and watched how Joey did it.

He was rocking. Joey’s bicycle swayed from side to side as he cranked down first one pedal, then the other. His bike swung so far over, it looked like he’d fall. But he didn’t. For the first time, I understood how Joey’s center of gravity, pedal strokes, and his grip on the handlebars all coincided to keep him upright. All I had to do was stand up, lean forward, and allow my bike to rock side to side as my upper body swayed in the opposite direction.

It was liberating. Not only was this easier on my legs, but flirting with gravity thrilled me. My loaded bicycle swayed its way dutifully up the steep hill, and by the time I reached the summit, my face was sore from grinning.

“How was that?” asked Joey.

“Let’s do it again!” I screamed, sailing past him down the other side. That October, the Ozarks became my playground. I was rockin’ it. 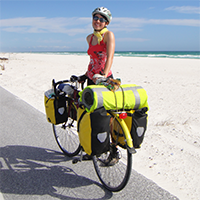 Olivia Round is a writer and cyclist who is currently writing a memoir about her cross-country bike tour. For more information, and to read her interviews with other female bicyclists, visit her website at OliviaRound.org.

Want to read more from Olivia? Find all of Olivia Round’s posts here.

I cried just reading this, so inspirational, thanks.

Thank you, Liz! Glad you enjoyed it.

What a fun read. Excellent!

Thanks, Erin! Cycling is such fun, once you master the basics :)