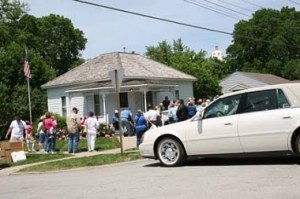 Even today, more than 30 years after his death in 1982, you're likely to hear the name "Clarence Pickard" mentioned with reverence by a fellow cyclist or two if you brave the crowds, July humidity, and miles of cornfields to ride the Register's Annual Great Bike Ride Across Iowa (RAGBRAI).

In a piece titled "Proud of Pickard" (pdf) that I had the pleasure of writing for the November/December 2000 edition of Adventure Cyclist magazine, I told about the origins of RAGBRAI and of Clarence's involvement: "In 1973, Des Moines Register feature writer John Karras and 'Over the Coffee' columnist Donald Kaul, both avid cyclists, agreed to pedal their bicycles across the great state of Iowa and report in the Register on what they saw and experienced. ... One of the more intriguing individuals to appear [out of the 300 who showed] was Clarence Pickard, an 83-year-old retired farmer from Indianola, Iowa. Pickard admitted that he hadn't ridden a bike much in recent years, yet he was one of just 114 riders to complete the entire state crossing from Sioux City to Davenport, and he did it aboard a used lady's Schwinn."

(A personal aside: While researching the Adventure Cyclist piece, I had the opportunity to visit with Clarence's two sons, who were intrigued to learn that my dad also grew up on a farm in Indianola. "I remember McCoy Hardware," Jack Pickard told me, referring to a business owned by a great-uncle of mine. Jack said he remembered accompanying his father on trips to the store to buy all sorts of things, including 16-penny nails that cost only about five cents each. "Now, as a young boy," Jack said, "I thought we were getting a real deal.")

Today in Indianola you'll find a park named after Clarence, who lived a long life characterized by unbending personal integrity and a youthful spirit of adventure. In 2009, RAGBRAI overnighted in Indianola for the first time in its 37 years. In honor of that milestone and the memory of one of its favorite sons, the city developed and sold The Official Clarence Pickard Pith Helmet, modeled after the unusual, duct-tape-covered headgear Clarence wore while cycling to shield his bald head from the sun. (He also bicycled in long pants, long-sleeved shirts, and woolen long underwear, but that's another story.)

By the way, in the opening paragraph of this post I mentioned Clarence's death, but I didn't say how how he died at age 92: he was struck and killed by a truck while out for a jog. You can read more about this singular adventure cyclist at the RAGBRAI "Remembering Clarence Pickard" page.

Photo by Michael McCoy: Not far west of Indianola is Winterset, where you can visit this modest house where an American even more famous than Clarence Pickard came into the world. Born Marion Morrison, he became better known as John Wayne, aka The Duke.

I understand heat and humidity in Des Moines during July a good inexpensive bike for the average mountain biker is great selection and prices.

very hard to belief the instant death like that, cycling is good for health but we have to careful during jogging.

Their bicycles across the great state of Iowa, these bikes carry the names , Mongoose, and more, but let me guarantee you, they are the real McCoy!

This is really amazing story. I can't believe Mr. Pickard was out jogging when he was 92 years old!

Really inspirational. I never heard about Mr. Pickard before, but now he has my utmost respect. I love cycling (amateur of course) and stories like these really get my imagination flaming.