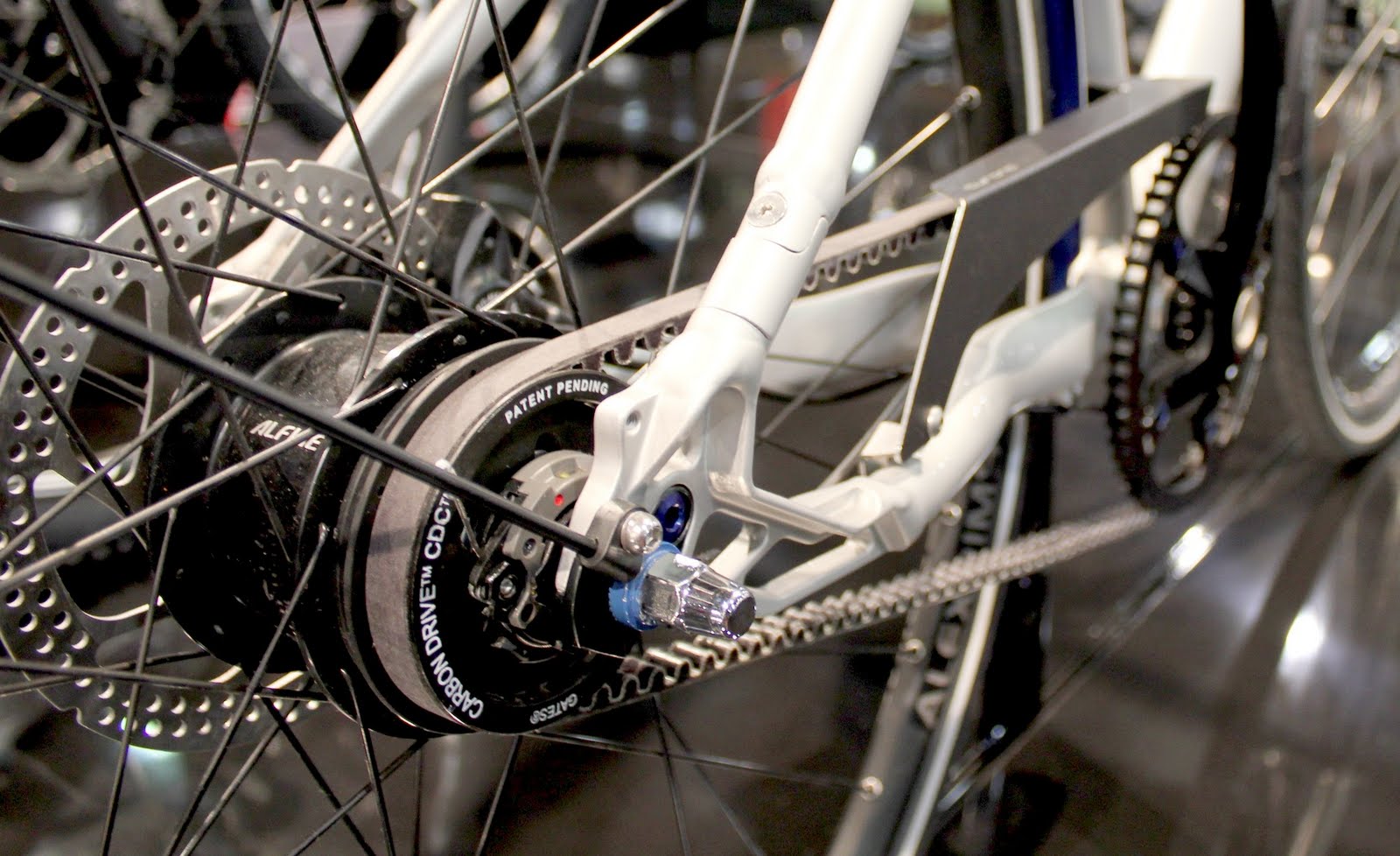 Belt drive transmissions are probably best known in the motorsports world, where you can find them on a fair number of cruiser-style motorcycles. Over the past few years, they have been slowly working their way into the cycling scene, and are currently most commonly found on urban single-speed bikes.

The benefits of belt drive over a bicycle chain, which you may already know, are that they are cleaner (since they don't require any kind of lubricant), quieter, and they last longer. With less maintenance required, and greater durability than a chain, you might think they would naturally belong on a touring bike. But there are two key points that have caused a lot of bicycle tourists to avoid these setups.

First, belt drives require a split rear stay, meaning that somewhere near the rear drive-side dropout, the frame needs to be able to break apart. This is because the belt cannot be split and reattached like a chain, so it requires the frame to be temporarily broken to loop through the rear stays. The good news is that almost every major frame manufacturer is getting on board the belt-drive train — but, as I mentioned earlier, these are going mainly to urban commuter bikes.

The second knock against the belt drive system for touring is the limited gear range. Even with an internal gear hub, you still don't have a ton of range without a front derailleur option. Fortunately, it's sounding like there is some really cool stuff on its way to take care of that challenge. In 2008, Truvativ released their HammerSchmidt internal gear crankset; unfortunately, it was available only on bikes with ISCG tabs, so it was limited primarily to all-mountain and downhill bikes.

Last year, FSA's commuter brand, Metropolis, brought this idea to the masses by making an internal gear crankset that would fit on just about any bike with a 68mm threaded bottom bracket. The crankset provides a gear equivalent of a 28/45T chainring. Right now, this is available only for chain drivetrains, but I've heard rumors of a belt drive model in the making. It wouldn't be perfect, but it would be a huge step in the right direction for making the technology more attractive to touring cyclists.

Rose bikes in Germany do a Gates Carbon Drive belt with Alfine 11 speed, Rohloff 14 speed and quite new the 18 gear Pinion crank gear arrangement. The Pinion setup sounds great as it leaves both hubs as standard setups.

The zero-maintenance aspect certainly appeals to me as a mountain biker, and could be a boon for tourists. Though expensive, the 14-speed Rohloff hub has more than enough range for most people, and is built to take the stresses of touring and mountain biking.

"Holding up" shouldn't be a problem, if aligned and adjusted properly. This has to be done only once, but is the main manufacturing challenge, on top of the splittable frame.

I am not known with the Metropolis crank but several European manufacturers are making belt driven touring cycles : Santos, VanNicholas, Koga, Vittorio(custombuilder), with Rohloff gearsets. Fahrradmanufaktur, in Germany, also makes a nice commuter bike, but with an Alfine 11 gear set. Others, like Idworx are still opposed to the belt drive, as they think it will not hold up as well as as a chain in difficult circumstances and also the frame needs to be manufactured very precise. Interesting development though.

With a NuVinci CVT in the rear, the internal gear crankset and belt drive could be a really cool setup. The only problem I have with the NuVinci is that it is flat-bar specific. I greatly prefer drop bars.

Very cool to see this gaining momentum. Thanks for the post!