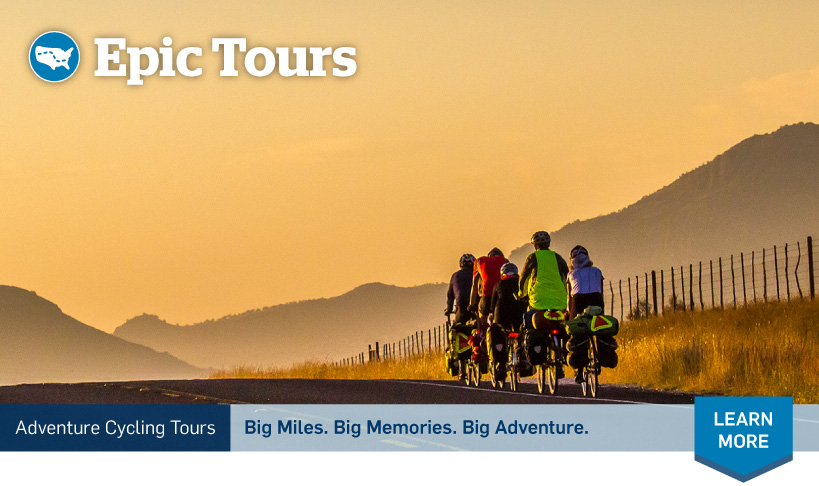 This year, you're going for it — the big, cross-country bike pilgrimage. Make the commitment. You'll have nothing to regret when all's said and done and a lifetime's worth of stories to tell. We’re talking about a 28- to 93-day, self-contained or van-supported adventure, an Adventure Cycling Epic Tour. Since 1976, we’ve made people’s dreams a reality. A small team with a qualified leader, shared gear, and one goal can make dreams come true. This is your year to grab your bike and go on an epic adventure that will leave you with a lifetime of memories.

Self Contained. A multimodal adventure deep in the heart of Alaska beginning with a ferry ride along the coastal tail of this wild state.

Van Supported. The Northern Tier has been the location for great bike adventures for a quarter of a century, following a wonderfully diverse cross section of the North American continent. Between Bar Harbor, Maine, and Anacortes, Washington, lie places of extremes for you to discover.

Van Supported. We'll experience some of the finest terrain and tour some of the coolest cities in the world! From our border with Canada, we'll head south through the lush forests of western Washington before following the Columbia River to the Oregon coast, where we'll encounter some of the nicest state parks in the country.

Van Supported. The Southern Tier has become one of our most popular tours, and it's easy to see why. This cross-country route is 1,200 miles shorter than either the Northern Tier or TransAm yet offers epic quantities of scenery and shoulder-season sunshine.

Van Supported. This take on a classic route should entice people who love riding trail systems. By riding the entirety of the C&O Canal Trail and Great Allegheny Passage in the east and Katy Trail in the Midwest before meeting up with the famed TransAm Trail in Colorado, this tour will have over 500 miles of bicycle paths and should be an experience of a lifetime for anyone looking for a transcontinental ride.

Self Contained. Thousands of cyclists have pedaled the 4,253-mile TransAmerica Trail and will tell you they captured a lifetime's worth of memories along their tour. For many traveling cyclists who haven't yet experienced the TransAm, it remains the holy grail of American bicycle tours.

Inn to Inn. Maui, Molokai, and Lanai: three of Hawaii's most beautiful islands and the setting for an unrivaled bicycle travel adventure. This unique tour features a ferry and a small plane to bring together these three Hawaiian islands into a single bicycle tour.