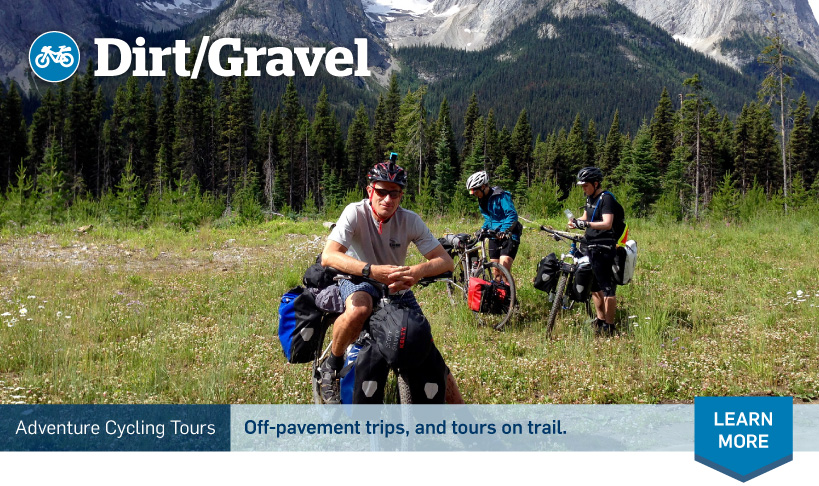 Whether you’re a rail-trail roller, gravel grinder, or a singletrack sender, Adventure Cycling has the ride for you. We have a bunch of off-road cycling tours across the U.S. in our van-supported, self-contained, inn-to-inn, and fully supported formats. From easy dirt trails and forest service roads to singletrack, we have it all. Be sure to read through the full tour description and feel free to contact us for more information about the best bike for your tour.

Van Supported. The Allegheny Mountains Loop lets you experience the beauty of these stunning mountains and offers a wide variety of riding types. After this amazing experience, you are certain to appreciate why West Virginia is affectionately called the “Mountain State.”

Van Supported. This van-supported trip will explore a portion of the Arkansas High Country Adventure Route. This challenging ride will be perfect for a gravel grinder or hardtail mountain bike. The tour has a lot of gravel and quiet low-traffic routes exploring the rugged Ouachita Mountains.

Fully Supported. This fall you won’t need to worry about traffic as you ride your hybrid or mountain bike 330 miles on gently graded gravel and dirt trails from the heart of the nation’s capital north into Pennsylvania.

Self Contained. This spring, you won't need to worry about traffic as you ride your hybrid or mountain bike some 330 miles on hard-packed, gently graded gravel and dirt trails from the heart of the nation's capital north to Pittsburgh, Pennsylvania.

Self Contained. Immerse yourself in a long weekend of cycling and camping in the spectacular Pine Creek Gorge of central Pennsylvania. Come join the challenge and fun of pedaling on an entirely car-free trail through the Grand Canyon of Pennsylvania, and gain a new natural perspective of this beautiful part of our country.

Self Contained. As the experts on self-contained bicycle travel, we’d like to share our knowledge by offering our Introduction to Gravel Touring & Bikepacking course. Two days of open-air, informal campground discussions will be followed by a fun, four-day tour of the Whitefish, MT area.

Inn to Inn. There might not be a trail in the U.S. better suited for a relaxed ride than Missouri's popular Katy Trail. Car-free, virtually flat, and featuring a crushed-limestone surface, the trail dishes up plenty of towns and attractions (and ice cream stands) along the way to keep things interesting. This tour is perfect for any wanderer who enjoys meandering through small towns and stopping to smell the roses.

Inn to Inn. Ride the Ohio to Erie Trail and connect the Ohio River on the Ohio/Kentucky border with Lake Erie to the north. This great 8-day tour will cover one of the longest continuous bike paths, also designated as Ohio Bike Route 1.

Van Supported. Explore Virginia's best backcountry riding on unpaved and touring routes. From the beautiful countryside of the Shenandoah Valley to Virginia's loftiest vistas and two of Virginia's most popular rail trails, the TransVirginia Route takes the road less traveled.

Van Supported. Edward Abbey once described the deserts of southwest Utah as "Light and space without time, I think, for this country with only the slightest traces of human history." Join us, and find out what Abbey meant: Mountain biking slowly and exposed to nature's elements is the ideal way to take in the spirit of this land.

Fully Supported. Bicycle through the heart of Cajun Country and partake of all the food, music, and culture that Acadiana has to offer. On this relaxed tour you can enjoy jambalaya, crawfish pie, and gumbo, and you'll find that the spicy cuisine of southern Louisiana is complemented by its mellow terrain.