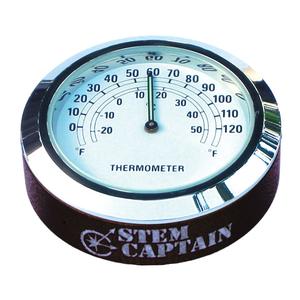 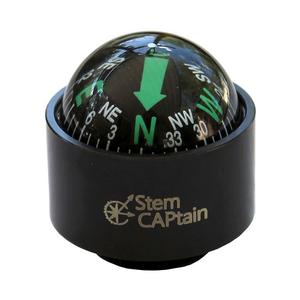 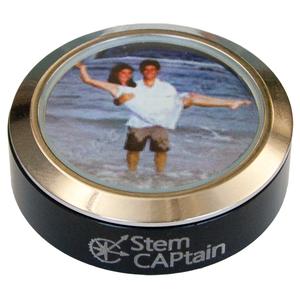 StemCAPtains are an accessory for your bike that replaces your stem cap with a clock, thermometer, compass, or picture frame. Simply unscrew your existing current 1in or 1 1/8in threadless headset stem cap, pop in the CAPtain, and it’s Time to Ride!

NOTE: Steel frames or components and electronics mounted near the compass may cause magnetic interference.

Worked really well for me. Greatly improved over earlier version

The mounting instructions were a bit unclear. I thought I needed a separate mounting piece for it to work, which it turned out I did not need. It is winter and the bike is in my basement so I don't know how well it works on the road, but so far it reads my basement temp accurately.

The mounting is secure and the whole thing sticks up past the stem pretty far, but to my mind the compass is lacking. It's a little sphere floating in a plastic ball, kind of like some car compasses. Unlike a car compass, however, the direction you're headed is on the opposite side of the ball from your seat, rather than facing you. That is, if you're headed north, you see the letter S from where you're sitting. To see the entire compass rose it's best to stand on the pedals and lean over it. I took it off after one ride.

DIDN'T WORK ON THE BIKE

North was always pointing towards me. Off the bike it was fine. I took off the computer that had the battery as suggested in another review and it didn't make a difference so it seems the problem lies with the steel frame.

Good idea but doesn't work if you have any asserory with a battery nearby.

The compass was easy to install, but once installed only points North. I don't know if the interference was because of the steel frame or the magnet for the computer.

Since I live in the Desert Southwest and ride in triple-digit temperatures regularly, I really like this. I was a bit intimidated, so hired the bicycle shop to install it. I liked it so much that i bought two (one each for touring bicycles.) The display is clear, and, so far, I haven't had any problems with the product.

put the Temp version on my bike, is always within a couple of degrees of others digital versions, no prob with the mount over a year's use.

temp is spot on

Got the temp version, fit fine on my Co-Motion, has never moved, temp is spot on, much better than the digital version on other bikes

This has been an outstanding piece of gear. I have riden with it year round with no failure, in fact it registered to 0 degrees F. If you already know your layer chart this will allow you further clarity and layer adjustment.

Very disappointed. The compass worked correctly when out of the stem cap. But immediately upon insertion, the compass stopped using magnetic north and started using the magnetic attraction within my bar, fork, or stem. I was always headed north!

This is my second Stem Cap (clock both times). The first one popped off whenever I hit a bump or rough road. No matter what I did (including putting rubber cement underneath the clock in an attempt to glue it down) it still removed itself from time-to-time. Thus far this one has stayed put!

It's nice to have a clock, but the first one I got was DOA. The manufacturer replaced it and it worked fine for a while. After about 6 months, the clear plastic "crystal" popped off, I guess while I was riding, and it was gone. Shortly after that the clock just stopped. The clock mechanism is a very cheap watch and just not durable enough for even road riding.

This was a gift, and as that, I thought it was a great thing! My cousin seemed to like it, but he hasn't tried it yet.

Nice bling, but be careful not to...

I bought this for a road bike, It looked excellent, and assembled simply. However,The stemcaptain presses into the mount and friction seals with a silicone gasket. i hit a hole on a rough road and the clock popped out and was gone. I guess thats my bad. There is no way to prevent that unless i silicone it in. I contacted Stem captain, and he offered to ship a replacement, which was nice of him, but i never saw it. Go figure. Get it if you are certain you wont hit a bump.

Some people say you shouldn't care what time it is on tour. Not me - I like to know. It's so nice to be able to just glance down and check! It's much easier than trying to pull my jacket sleeve back so I can check my wristwatch. That may sound lazy to you, but I like it. Plus, I think it looks cool. Installation is a piece of cake. The only difficulty is setting the time, but you only have to do it once (and then again for daylight savings.) I have this on two of my bikes!

This is a simple yet very useful product. After years of strapping a wristwatch to my handlebars, there is finally a practical solution. With a glance I can see the time without scrolling through computer or cell phone screens. Its always there. Easy to install.

This is my new favorite bike schwag! I look at it many times during a ride - many more times than when I had to pull back my sleeve to look at my watch. Plus, the analog is easier to read for my old, myopic eyes than digital. The only drawback is that now I want one of these on all my bikes!

Everyone should own a stem cap clock

Let's think this one through: if you're wearing a wrist watch so you can keep track of time while you're riding your bike you are exposing your wrist to a tan. When you take your watch off to take a shower - or for any reason - you have that nasty looking white spot on your wrist that is the shape of a watch. With ownership of a stem cap clock you leave your wrist watch at home when you go for a bike ride. No unsightly tan mark! Why didn't I dream this one upω Buy one. It's cool.

These are novelty items that do not secure well. A poor design of inexpensive construction.

Works good. Easy to install and accurate display. Mechanical guage means no batteries required. It relies on friction to hold it in place inside the cup that is screwed onto the top of the stem and is not a tight enough fit. Any small brush against the edge knocks it out so it is easily lost if you're not careful. We added a piece of double-sided tape to the back of it and that's helped.