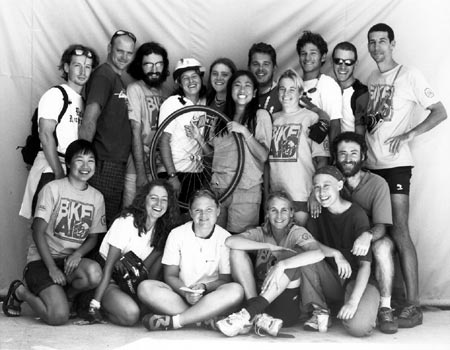 Think of it as the Peace Corps on wheels. Bike Aid, a program sponsored by the Overseas Development Network of San Francisco, took to the open road in the summer of 1997 to raise money for environmental education and action around the United States and the world. Seventy-five riders took three different routes across the nation to carry their message of social activism to local community groups and environmental organizations. The riders began simultaneously last June 16 in Seattle, San Francisco, and Portland, and finished in Washington, DC on August 20. "Our" group of 17 riders, pictured above, began in Seattle. (There were actually 21 riders in the group; four were unable to make it into the photo.)

Each Bike Aid rider agrees to secure a minimum of $2,000 in fundraising pledges toward his or her goal of $3,600 total in pledges (or $1 per mile ridden) by the end of May each year, prior to leaving on their rides in June. Riders average 70 miles per day; a support vehicle carries personal gear, food and water. Bike-Aid does allow participants to ride only part of the route if they prefer.

Funds from the 1996 Bike Aid went to a wide variety of projects in this country and abroad, including a campaign to preserve the remaining rainforest in southern Nigeria, one of the few habitats left for the lowland gorilla, and a project in Salina, Kansas where researchers are developing modern farming methods that will not require the use of fossil fuel. Since 1986, when it began, Bike-Aid has raised more than $1,200,000 for projects such as these in Nigeria and Kansas, and many others around the country and the world, involving more than 800 cyclists from 29 countries in its efforts.

The 1997 ride focused, appropriately enough, on sustainable transportation, with a particular emphasis on working to reauthorize the non-motorized provisions of ISTEA.

The obvious enthusiasm of "our" Bike-Aid group was apparently matched by those they met along the way.

"This was my first visit to the United States, and I've been astounded by the hospitality and generosity," said Stuart McKenzie of Australia. "I think this is the best way to see the USA."