Today we welcome Greg Siple -- co-founder of Adventure Cycling and art director -- as a contributor to the blog.

We bicycle tourists are constantly thinking about weight. Every ounce of our bicycle and gear is weight that we need to propel up and over passes and across windswept Midwest prairie under our own power. Nonetheless, in the course of shooting photos of Adventure Cycling's visiting cycle-tourists, I've marveled at the huge loads some riders carry. When I asked how much their rigs weighed, they could only speculate. Were they guessing high or guessing low? I decided to find out.

This summer, we rigged a scale suspended from the roof of the loading dock in the alley behind the our office. (The loading dock is the 'studio' where I shoot the portraits that are seen in each issue of Adventure Cyclist.) I added a space on the model release questionnaire for the subject to write in a guess at the weight. After the photo was taken the packed bike was wheeled to the scale and the rider faced the truth.

The first weigh was on August 3. Our subject was Andrew Robert McComb, a bike builder and mechanic from Wisconsin. He began his ride in Chicago and was headed to San Francisco by way of Seattle. He guessed 135 pounds and, though it would make absolutely no difference in his progress, was pleasantly surprised to learn that he had only 99 pounds of bike and gear.

Over guessing, as it turned out, was not the rule. Of the seventy-nine bikes we weighed only 26 riders over guessed. Two riders were on the mark with their guess.The remaining 51 were under guessing. 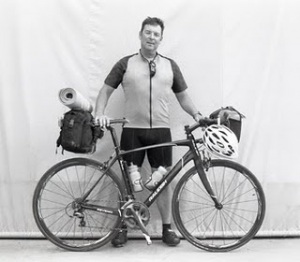 Most bikes, 53 of them, fell between 70 and 95 pounds. The lightest rig, at 50 pounds, was ridden by John Colver of Seattle, Washington, (pictured above) whose ambitious ride is in the form of a loop out of Seattle that includes New York, Florida, and California. The 1981 Scottish National Champion said that his packing style was inspired in part by by Coco Chanel who said, "Before leaving the house, a lady should stop, look in the mirror, and remove one piece of jewelry."

Only one tandem rolled into the office since August 3. John Shade and Rachel Siciliano were riding from their home in New York City to Astoria, Oregon. They had a 150 pounds of bike and baggage, which sounds high but average when it's divided between two riders. We had a few trailers that required a decoupling and separate weighs to come up with a total. 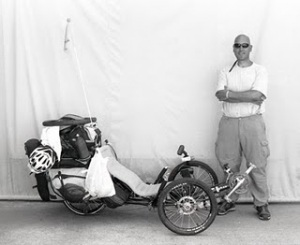 We were certain we had a record for the heaviest rig when we saw Stephen Nordland pull up in front of the office on his heavily laden Greenspeed recumbent tricycle on August 18. If his guess of 113 pounds proved accurate the 'honor' was his. But we were all shocked when the needle on the scale rotated to 162 pounds! He was on his way to South America from his home in Columbus, Ohio, and apparently was carrying equipment to respond to every situation. (He noted that when he began his trip, his own weight was at 190 pounds. Six weeks and a couple thousand miles later it had dropped to 160 pounds. The rigorous work out had put him and his bike and gear in the same weight class.)

But Mr. Nordland's record lasted only 40 days. On September 28, when we thought we had already seen the last of 2011's visitors, Monika Esterman and Robert Spengeler turned up. The Swiss couple were deep into a round-the-world tour. They had already ridden through Europe and Asia and were now tackling the western hemisphere from north to south. I shot the portraits and Monika rolled her bike to the scale. She guessed 100 pounds. But the scale told a different story -- 154 pounds. Then it was Robert's turn. He predicted 99 pounds. But we saw the needle dance to 170 pounds!

We knew that Mr. Spengler's record would hold well into 2012. After all, we were about to enter our dormant period when the temperature begins its plunge and and winter locks us in. Only staff commuter bikes would be filling our bike racks. The next contender for high weight honors would be arriving next May. But then another Swiss rider showed up on October 3.

He was Christian Moser, a 34-year-old software engineer riding from Alaska to Los Angeles, California. It was immediately evident that we had a challenger. The load was considerable. The portrait was taken, the bike moved to the scale and the needle turned to 174 pounds. 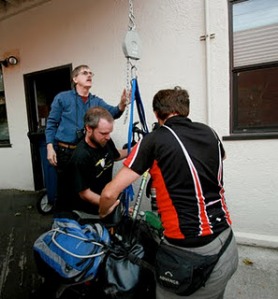 The weigh project has proven to be much more popular than we expected. After only two weeks of weighing, we knew we were really on to something. News of the scale was carried by the outbound cyclists to the inbound cyclists converging on Missoula. Visitors began asking for a weigh even before asking where the complimentary ice cream was. We'll be giving the scale a rest over the winter but will have it up and ready to go when the first cyclist of 2012 walks in our front door.

GREG SIPLE is our art director and a co-founder of Adventure Cycling Association.

Hi there, I met the Swiss cyclists Monika and Robert while I was cycling from Alaska to Victoria Bc. They had an awesome bike/pannier set up..and yes, tons of gear! Any chance you might have contact info or a blog address for them? I'd love to catch up with them!

Thanks for your comments! Not sure if Greg plans to publish the data or not ...

The one question people always ask on the road that we never had the answer to was, "how much does the rig weigh?" Thanks to Greg and team for giving us the answer. Oh, and the ice cream was nice too! Thanks for letting us visit, ACA. Twas fun.

Are you going to publish the data?