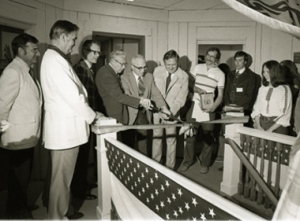 Let's start with the first -- the first Adventure Cycling route. Over the years, a lot has been written about the history of the TransAmerica Bicycle Trail so I won't even try to cover that territory. Instead, let me tell you a bit about an oft unsung pioneer of the Bikecentennial movement, Lys Burden.

She was a Hemistour rider (Hemistour being the 1972 expedition Lys and Dan Burden with Greg and June Siple undertook to cycle from Alaska to the southern tip of Argentina), Bikecentennial co-founder, and a University of Montana student majoring in geology, when she set out to create a route across the country. According to Greg Siple, co-founder of Bikecentennial (now Adventure Cycling), "Our organization was more theory than reality. She and Dan [her husband and another co-founder] were living in a small apartment going to school, taking odd jobs and for a time were on food stamps. There were no computers or internet."

In the credits on every one of the TransAmerica map sections, 'Original Route Design' is followed by her name. This very capable young woman went on the road in a VW micro bus, with a shoestring budget, and put together a route that, for the most part, is still intact today.

Her maiden voyage set the standard for route creation. It continues to live on as we prepare to release our latest milestone route, the Sierra Cascades Bicycle Route, in April.

Number of states it crosses: 10

?This piece was written in collaboration with Greg Siple, co-founder and art director of Adventure Cycling Association.

In this photo: Three years after Lys Burden began work on designating the TransAm Trail she looks on as the Montana state governor, the Missoula mayor, and others officially open the Bikecentennial office with a a ribbon cutting ceremony. Lys is on the far right of the photo.