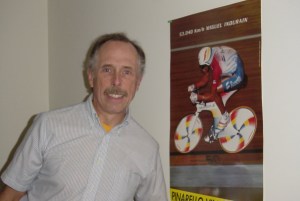 I would like to introduce you to Kerry Irons. Around here, we call Kerry our extraordinary volunteer - and he truly is. Since I came on staff in 2005, Kerry has been by my side (virtually) providing support, guidance and a whole lot of effort - like 20+ hours per week!

Kerry helped document the inventory of state routes, which he then helped format into the Inventory Report. It was this inventory that helped the USBRS task force develop what has become the National Corridor Plan.

And now, we have even more to thank Kerry for. Kerry has played an instrumental role in gaining local agency support for USBR 20 through Michigan. Through his expertise, Adventure Cycling will now launch virtual training sessions to help other states educate road authorities about bicycle travel and the benefits of the USBRS in order to gain their support. Kerry's ability to document and follow-up with the agencies will also be an integral part of the training. It's all a delicate balance - and Kerry knows how its done.

Here is Kerry's story in his own words:

"January 2004 I came to Missoula (as part of a ski trip) and met with Adventure Cycling's then-director, Bill Sawyer. He proposed a project loosely described as "public ownership of the Adventure Cycling route network." I retired at the end of April and started working on the project shortly after. It morphed into the U.S. Bicycle Route System (USBRS).

I needed something interesting and useful to do once I retired so I contacted Adventure Cycling and the project Bill described seemed made to order: long term, national, and really meaningful for bicycling.

The AASHTO Task Force formed in June of 2004 (though it was April 2005 before it actually met) and in the meantime, Adventure Cycling staff and I did a bunch of background work. Then, starting in mid-2005 through the end of the year, I compiled a spreadsheet of existing routes in each state. Tom Robertson converted that to several layers of maps with official state routes, rail trails, bicycle travel friendly roads, etc. Beyond that, I was doing whatever leg work was needed, drafting all kinds of documents including route criteria, numbering proposals, liability issues, economic impact, etc.

Leading up to the final approval by AASHTO, I helped with presentations, communications to state level advocates and bicycle-pedestrian coordinators, refining the route designation application form, and so on. Since the approval of the USBRS, I have been working with state level volunteers, most particularly on two routes proposed for Michigan (USBR 20 and USBR 35).

The real opportunity now is to develop a volunteer network in each state to do route implementation projects. This involves defining specific routes and getting the approvals in place to all the states to file applications with AASHTO. What has been learned on the two Michigan routes has been converted into guidance documents and some work processes that will help each state to rapidly move to route implementation. As volunteers are identified, we now have the knowledge to train them in successful route implementation and provide them with template approval resolutions, FAQ lists, procedures for contacting local agencies, contact scripts, etc.

Getting a network of volunteers working on the ground level can result in relatively rapid route development. It takes roughly six months and 200 hours of work to get a "typical" route implemented. Many states have three or four routes to develop, so it will take time, but it is not an overwhelming amount of effort. When you have committed volunteers who will work with their state DOT, their state advocacy organizations, propose detailed routes, and work with local agencies to get routes approved, it happens pretty quickly. A national network of bicycle travel routes is within our grasp!"

On behalf of traveling cyclists (and all cyclists, really), thank you Kerry for your steadfast dedication to the USBRS.

BUILDING THE U.S. BICYCLE ROUTE SYSTEM is posted by the Travel Initiatives Department and focuses on news related to the emerging  U.S. Bicycle Route System (USBRS).

Thanks for all your help, Kerry.

By the way, I found my old Cyclo-Pedia catalog the other day...