I recently sat down with Adventure Cycling Cartographer Nathan Taylor to chat with him about the project that has been occupying his time for the past year, the development of Adventure Cycling’s exciting new Texas Hill Country Loop.

The Texas Hill Country Bicycle Loop is a 310-mile loop beginning and ending in downtown Austin, with a 71 mile cutoff route from Fredericksburg that allows the distance to be reduced by nearly a third. A shorter offshoot loop was also mapped to bring cyclists to the famous outlaw country town of Luckenbach. Expect miles and miles of country roads rolling across oak forested hills or winding along riverways encased by limestone cliffs. Weather is generally dry and mild, though expect some wind to kick up in the higher elevations near Fredericksburg, especially during shoulder seasons. Also, while the “wet season” should be a relative term for Texas, flooding does occur in many locations along the route in May and June.

Variations of the route have long been popular as ACA guided tours. It was only a matter of time, it seems, until the route was officially mapped and added to the Adventure Cycling Route Network.

What State or National Parks are on the route? 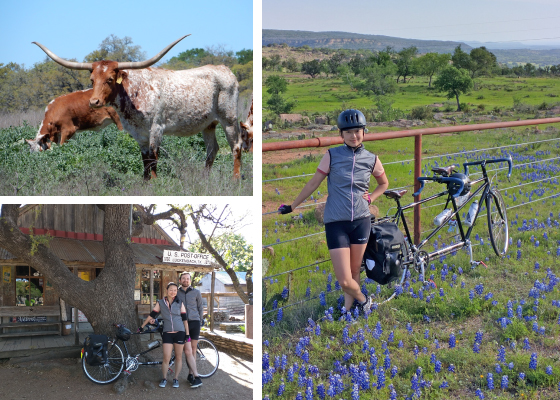 Standard touring setup should be fine. The route is entirely paved and services are well spaced even in the more rural areas in the western part of the loop.

The terrain would be characterized as hilly, as the region is named the “Hill Country.” The western half of the main loop has the most amount of elevation change, and the rollers there will likely induce fatigue in an already tired pair of legs. There are, however, no steep mountain passes to be crossed along the entire route.

The Hill Country’s unique attributes, both geographic and cultural, make it one of the most popular tourist destinations in Texas for both state residents and non-residents. Adventure Cycling’s Hill Country Loop takes in a terrific sampling of these visitor hotspots. 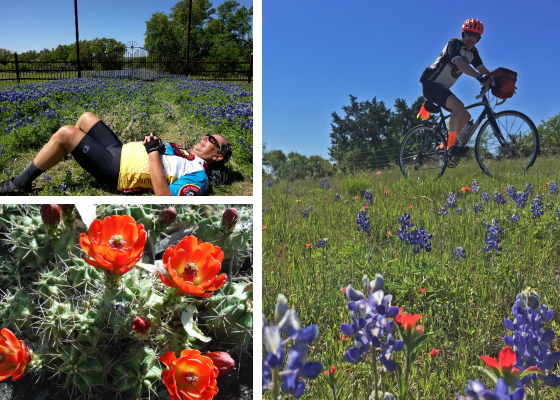 Simply fly into Austin International Airport. The route passes by just yards away from the tarmac.

What is the best time of year to ride the TX Hill Country Bicycle Route?

April for lower temps and blooming flowers, including the famous Texas bluebonnets, and also because most rain falls in May in this part of Texas. But really, an advantage of mapping this route is that it can be ridden any time of year.

I just completed this new tour. There are some great sections. The weather was hot and humid, but even in late May the wildflowers were amazing. I even found one last patch of Bluebonnets. The view of Enchanted Rock along Map 6 made the whole ride worthwhile. The route is good in Austin, ok on east side of I35, fantastic in the actual Hill Country, and nerve shattering in Leander/Cedar Park. If you can arrange to just skip that section, skip it. It added nothing to the experience except a way to get back to the start.

This goes right by my house! Super-excited to try this out. Many thanks!

It goes by my house, too. I say Spring Wildflower tour!!