In addition to traditional campground facilities, Adventure Cycling route maps also list what we call Cyclists Only Lodging. These are places along the way only available to the traveling cyclist and are generally only known because of our map listings or word of mouth. The options run the gamut from church sanctuaries to ranches to cycling specific camping areas. All aim to help the traveling cyclist and have their unique take on how best to accomplish their goal.

As routes gain in popularity, small towns often notice the increased frequency of traveling cyclists and want to know how to help them. We've put together web page outlinind ideas of how to build bicycle tourism. Check out the two examples below: 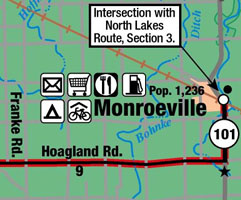 For over 30 years now, the Monroeville Community Center in Monroeville, Indiana has been welcoming traveling cyclists with a myriad of services from a place to sleep and shower as well as catch up on their laundry. Monroeville is the endpoint of three map sections, Northern Tier, Sections #8 & #9 and North Lakes, Section #3 map so they see a lot of Adventure Cyclists.

Recently, Twin Bridges, Montana has taken up the call. Their brand new, not quite finished, Cycle Campground is the newest example we know of. They are in the final stages of completion and intend to be open and ready to welcome traveling cyclists beginning Memorial Day weekend. Twin Bridges is the intersection point between Lewis & Clark, Section #5, and TransAmerica, Section #4, making it another popular crossroad on the Adventure Cycling Route Network.

What a great offer! Are you signed up with www.warmshowers.org? If not, you might want to check them out. Unfortunately, I don't think you're on an Adventure Cycling route but I'll bet you'll have plenty of takers regardless.

Check us out along your way down the MRT in Louisiana. Let me know when to expect you and I'll have warm showers and a meal waiting.

My website is about rental property, but my cyclist offer is southern hospitality; no charge.