Amtrak Launches Roll-on Bicycle Service on the Vermonter May 1st 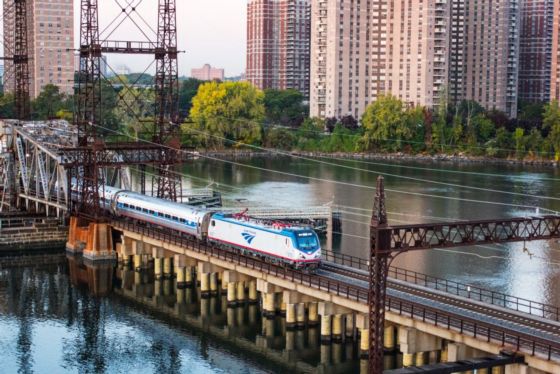 Amtrak’s Caitlin Cooper, state liaison in Amtrak’s Sales Distribution and Customer Service Department gives a behind-the-scenes look at what it took to get roll-on bicycle service on the Vermonter. She has been managing Amtrak’s bicycle program since July 2015 and is acting co-chair of the Amtrak Bicycle Task Force, a partnership between Amtrak, Adventure Cycling, and members of the cycling community.

Last September Amtrak launched roll-on bicycle service on the Capitol Limited, which allows passengers to take their unboxed bicycles on and off the train at all station stops from Washington, D.C. to Chicago. Due to the route’s proximity to the Chesapeake & Ohio Canal Towpath and Great Allegheny Passage trail between Washington, D.C. and Pittsburgh, roll-on bike service has been wildly successful from day one.

We are now excited to announce the launch of roll-on bicycle service on the Vermonter starting this May.

Amtrak’s Vermonter service runs daily between Washington, D.C., and St. Albans in Northern Vermont with stops in New York City, Connecticut, Massachusetts, and New Hampshire. Reservations are required and there is a $20 bike service fee between Washington, D.C. and New Haven, and a $10 fee between New Haven and St Albans, Vermont. Customers can reserve bicycle space when booking their ticket on Amtrak.com, by calling 800-USA-RAIL, or visiting any staffed ticket office. 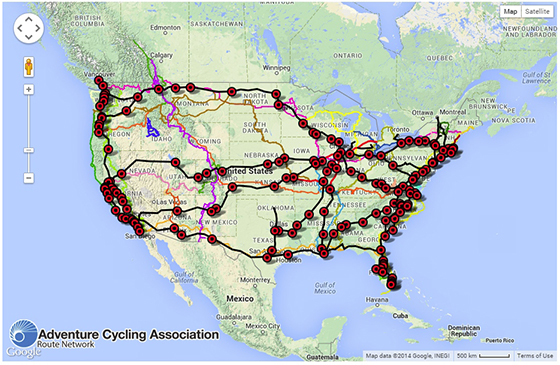 Behind the Scenes - Equipment Challenges

When we examined how to expand roll-on bicycle service on trains without baggage cars, we had to design a flexible solution without significantly affecting how those cars could be used on other routes without bike service. We also had to protect space reserved for customers with disabilities and avoid the removal of passenger seats.

Boarding With Your Bike

What our industrial designers constructed for our Amfleet coach cars is particularly clever and we are excited to pilot it this spring on the Vermonter between Washington, D.C., and St. Albans. In each of the coach cars, the vertical luggage rack near the vestibule was converted into a combination bike and luggage rack. When this equipment is on the Vermonter, the conductors can convert the luggage towers into bike racks. If one of these cars is used on another route that doesn’t offer bike service, the racks can be folded down to accommodate luggage. 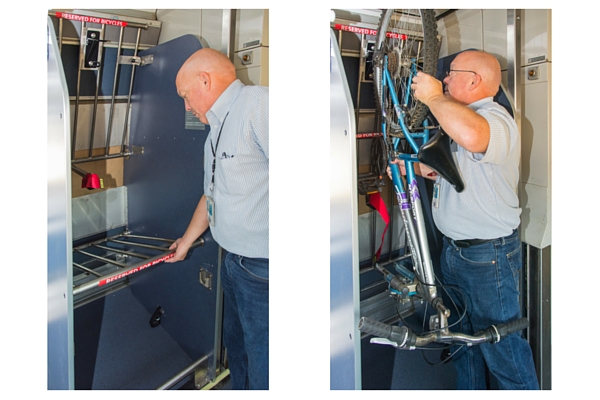 After boarding, customers will need to remove the front wheel of their bicycle and then place it on the floor beneath the bike rack. The bicycle is then hung from the back wheel and secured with the provided strap. Removing the front wheel is necessary so that the bicycle hangs flush with the back of the luggage tower and doesn’t impede passenger and crew movement through the train corridor.

Since these bike racks are located inside of the passenger coaches and not in baggage cars, we can offer bike service at all station stops along the route, not just from the stations that offer checked baggage. This will also be the first roll-on bike service in the Northeast. With the East Coast Greenway (among many other trails) intersecting or running along several of our routes in the Northeast, we are hoping passengers discover new ways to take train trips with their bikes. 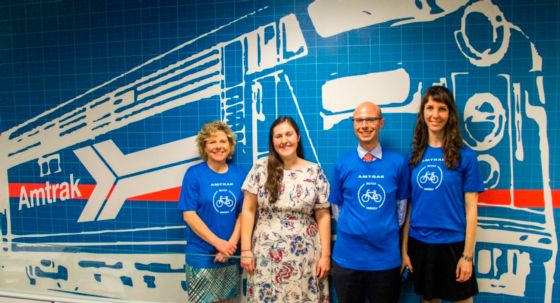 I’m looking forward to the success of this pilot program and we will continue to work with the Amtrak Bicycle Task Force on gaining feedback from the cycling community and identifying new opportunities for expanding bicycle service. Visit www.amtrak.com/bring-your-bicycle-onboard for the most up-to-date, comprehensive information about bringing your bicycle on board select Amtrak trains.

We used this service a couple weeks ago from Baltimore to White River Junction, VT (just a short, simple ride from Northern tier). It was much better than using the luggage service that we used on the Northeast Regional on the way home from Boston.

Overall, the service worked good. It was a bit of a challenge moving a bike, 4 pannier, and handlebar bag through the old train stations which have stairs and narrow doors. Same goes for boarding the train, would be nice if they figured out a way to give some assistance or let bikes board separately. May want to consider shipping some items ahead to save some lifting and hassle if you can. Near the end of our trip, we shipped 40 lbs of gear home on UPS for only $40 (including buying a box), as we didn't camp the last 3 nights of the trip. It was worth it by having 2 less panniers to deal with.

The bike storage rack itself was great, secure, and easy to use. No issues with fenders for either of our bikes, as the back wall isn't continuous/vertical. Panniers went on nearby luggage shelves. Note: each rack only stores 1 bike, and there are multiple spots through the train. So prepare to split up if traveling with a partner as you board. I have an XL bike, so lowered my saddle just to be polite and keep it from sticking out. The width of the rack is about the diameter of 700c x 35mm tire, as my 38/40 mm didn't quite fit horizontally but wife's 35mm tire did.

Don't recommend traveling on Saturday's right now, as supposedly they do track maintenance every Saturday in CT. We had to board a bus for an hour to avoid a section of rail, and then a bus broke down causing a 1 hour delay.

Excited to be able to take our bikes on amtrak for our new england/maine bike tour this summer. Taking the vermonter up and northeast regional with luggage service from Boston on the way home. Sure beats driving 95 from Baltimore

Wholeheartedly agree! We are in Vergennes, and our friends from the "south" would love to join us for bike rides in Addison County!

Keep up the good work! Now. If we can train some of the Amtrak personnel to not treat cyclists like terrorists we could really gain some ground.

The Ethan Allen needs to "get on board" pun intended. NYC to Rutland. It's much closer to Middlebury College and the southern Champlain Valley. There is some spectacular cycling to be had there. That part of Vermont could use the economic support touring cyclists could bring in.

Will I have to buy a ticket or make a reservation for my bike? What happens if I arrive with one and there is no room?

Hi Megan, thanks for helping to promote it!

1. The biggest challenge with this project for Amtrak was finding space on the train for bikes that didn't involve removing seats or putting them in the cafe car. So they decided to retrofit the luggage tower to incorporate a bike rack. Because its a vertical space, there isn't enough room for the bike to hang and to not stick out into the aisle without taking off the front wheel.

2. The two pilot projects - Capitol Limited and Vermonter - were chosen so Amtrak could look at the two different kinds of equipment types used on long distance vs commuter routes and how/where to put bicycles. Their solution has been to hang bicycles, and while we applaud their efforts, we recognize that there is more work to do to make it work for everyone and their bicycles. Amtrak won't understand that unless they hear from you. The best thing you can do is to write Amtrak customer service and thank them but let them know your concerns/desires for improving this service. They have to know that enough people will use it and that the payoff will be great enough before they can invest limited resources.

This is fantastic news and thank you, Ginny, for all your hard work. I look forward to communicating this to Bikabout's customers!

1 - why the removal of the front tire? Most city bikes do not have a quick release front tire

2 - is European-style, roll-on service in the discussion? Functional, transportation bikes are quite heavy and we shudder at someone trying to lift our bikes on a wall-mount system

Again, this is huge!

Will my fatbike fit?

Unfortunately no. Amtrak is only accommodating "standard sized" bicycles right now, and the bike rack space they've created sounds like its pretty limited in size. Hopefully in the future they will consider other types of bicycles.

What's the maximum # of bikes allowed? My friends and I sometimes tour together.

There are currently 3 bikes allowed per train, but that will increase to 4 once they get the final car retrofitted with the bike rack. Its not as much space as we were hoping for, but its a start. More here: https://www.amtrak.com/bring-your-bicycle-onboard.

What about bikes with fenders? I would think the front fender would interfere with the bike hanging "flush with the luggage tower".

It does appear a front fender could be a problem, especially a low front fender. I've looked at my wife's and my touring bikes.

-Mine-old style Salsa Down Under Rack & planet bike alx fenders. Looks to be ok, because the rack is lower than the rigid part of the fender. The rubber fender flap will bend slightly, and the weight will be on the bottom of the rack.

-Wife - Tubus Tara Rack and Velo Orange Fenders. The fenders will touch first and carry the weight, which is not great. But looks like I could attach some sort of temporary ~2" spacer to the bottom of the rack, so it touches first. The spacer would just be re-purposed from something I am already carrying (pannier, tube, water bottle, etc).

Of course with both of these, the lower part of the bike will stick out further than goal Amtrak desired by removing the front wheel. Tickets are already bought and bike spot reserved, so we will find out in late June!

Worse case, it would only take a couple minutes to temporarily remove the handlebars.

Anybody see any actual reviews of this service yet? We are scheduled to use this in less than a week. Got a call last week that Amtrak has a disruption in service and we will have a 1.5 bus ride across CT. They said bikes will be able to go under the bus....We'll see, but at least we will have front and rear panniers to use as padding to lay the bikes on.

I believe fenders should work with this bike rack design, but you should give Amtrak customer service a call to be sure.