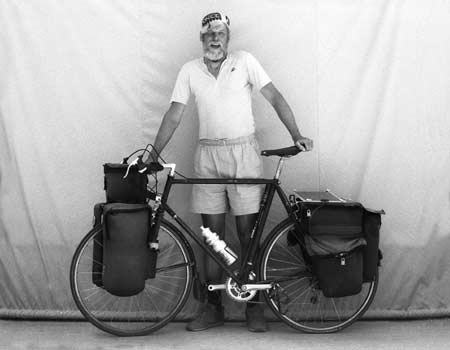 "The purpose of Ken Kifer's Bike Pages is to share what I know about cycling and to encourage others to bicycle as well." This is the first line on Ken's website (www.kenkifer.com/bikepages), a venerable gold mine of information for the bicycle tourist.

Ken stopped by the Adventure Cycling office in June of 2003. While he has toured for many years, this was his first trip to this part of the country, on his way out to the Pacific Coast from his home in Scottsboro, Alabama. Georgia">Ken's reputation preceded him from the writings on his website. On his site, he relays his philosophy on life when talking about his love of nature.

"I fully believe that man is designed to be a part of Nature and that our turning away from it has created major problems for us." It is through this thinking that he developed a love for the bicycle and, in turn, became one of the biggest proponents of cycling in the nation.

His bike pages include practical cycling information, statistical analysis, personal accounts of long trips and local experiences, photos, and humor. To sum it all up, he said, "I promote using a bicycle instead of a motor vehicle because doing so is kind to the environment, good for the body, and good for the psyche."

Ken's individualism came through in his touring equipment as well. The bike he toured on sported a set of handmade panniers with fringe, tiny key locks for each pannier, a homemade paint job, and an Amish mudflap that he acquired on a tour in Pennsylvania. Perhaps the most unusual item that he carried was a solar panel, which sat on top of his rear panniers. It captured sunlight as he rode during the day so that he could power his laptop in the evenings.

It's through this laptop that Ken captured his thoughts. Everything that he wrote is there for our education and enjoyment. Ken remarked, "I'm sure that no one will agree with everything I say, but I do hope that what I say will encourage both thought and change."

We were privileged to have met him and will long remember him.