In November 2014, I wrote about the conversation we were conducting with the California Department of Transportation (Caltrans) regarding the use of Interstate 40 east of Barstow, California, for our soon-to-be-released Bicycle Route 66 maps. 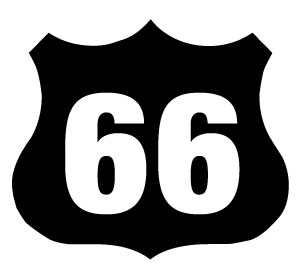 Right after I wrote that post we made our third request to the appropriate Caltrans district, District 8. In very short order we received notice that we had again been denied.

Our request is based on two factors: 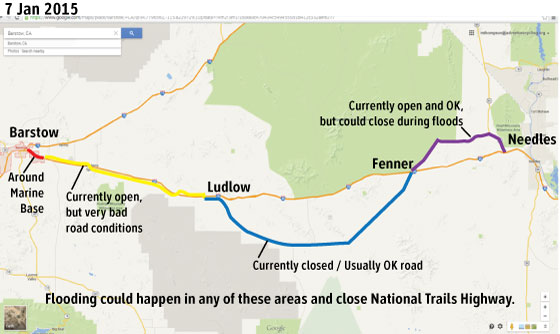 Map illustrating the issue outlined in item #1 above.

While we still haven't convinced District 8 to change their policy about I-40 in the large part of our request (item #1), we do have a small piece of good news to report.

We had heard from multiple sources that though District 8 says it's not legal to ride I-40 around the Marine Base, it is currently signed such that it is legal. We had a volunteer head out there over the holidays to confirm this. He brought back pictures that confirm these reports at the pertinent exits.

Photos showing signage (and lack thereof) demonstrating legality of bicycling on I-40 around the Marine Base east of Barstow, California.

Based on this on-the-ground evidence, we feel comfortable publishing the map using this routing and have informed District 8 that we are doing so. Cross item #2 off the list.

Unfortunately, we are still having difficulty with item #1. The maps go to the printer soon and we need a legal, complete route to publish. We will continue working from as many channels as we can to help them understand why this is so important to us and to get bicycle access to this travel corridor.

Stay tuned to this blog as well as our other social media outlets. We may yet issue a Call to Action asking you to help us convince Caltrans that our request is reasonable and in their interest as well.

Are there updates about these California sections? Our son is currently riding the route westward, in Oklahoma right now.

Yes, there is now a solution for getting through this area. Please see this more recent blog post:

On an Alaska to Ohio ride last summer I rode the entire I-94 across North Dakota. While certainly the most boring, it was also the safest riding other that some very isolated country roads or rails-to-trails routes. Lots of clearance and semi-truck drivers are the BEST at giving clearance.

I rode my bicycle from Missoula Montana all the way to the Minnesota border at Fargo on the freeways I-90 and I-94 without any problems. I felt safer than I do on most two lane highways and I am sure I was safer. Safety is not the reason to ban bikes from freeways it is just pure animosity to bike riders mostly from people in power that do not like bikes. This issue has been to court before and the bikes have been winning. We need a lawyer to help take up our case and get access to all the freeways other than those in big cities with lots of entrances and exits. Montana has the right idea.

Politely asking is fine but when we are ignored or denied it is time to fight for our rights.

I sent to the directors, but also had my Senator and Assemblyman call and look into it, since they are from California. It is sad that California, the State that prides itself on leading the country in alternative forms of transportation is the one holding up the whole route.

Dan: Thanks for the support! And for taking the extra step of contacting your Senator and Assemblyman.

Thanks, William! Would love to have you share the situation and Call to Action webpage with others: http://www.adventurecycling.org/actnow

The most recent federal highway legislation of 2012, MAP-21 - Moving Ahead for Progress in the 21st Century, has clear language requiring multimodality in planning and implementation of transportation improvements. Such language has been part of all federal transportation legislation since the early 1990s with ISTEA.

It would be nice if polite requests were entertained by governmental agencies; however, many times they get sent to the inbox for a decade or two. Meanwhile, nothing is done. In the case of riding on I-40 east of Barstow, there is no reason that cyclists could not be legally accommodated tomorrow.

Thus, a little encouragement is needed in the form of legal argument. If CalTrans actions violate the language and intent of federal highway funding, then any attempt to stop or cite cyclists could result in legal action which may hold up federal dollars for I-40 projects until such cases are resolved. Individuals can do this, but institutional support from an organization such as ACA would go much further.

In the meantime, publish the maps with an asterisk. Say that riding on I-40 is technically illegal, but that ACA is continuing to work to have the restriction lifted and will work with any person stopped for doing so.

Sometimes you have to do things that are technically illegal.

Thanks for chiming in. We believe we've been addressing the situation using all the legal arguments at hand. While we don't condone riding I-40 illegally, we'd be interested in knowing how cyclists are treated if stopped when doing so. I don't think there is anything we can actually do for them but it might be helpful to track the numbers over time.

A tour leader of ours was recently in the area and was driving on those local drive-arounds. He was stopped by the police. It would appear they are keeping an eye on the area and we don't advocate riding them.

Thank you for your continued efforts. We cycled this part of Route 66 (National Trails Road) in October 2014. We stayed on National Trails Road in the part of your concern. Yes, some of the road is like riding on a bad washboard. The places where the bridges were out had local traffic drive-arounds - which were easily ridden on a loaded bicycle. So, you can stay on National Trails Road, but there are parts where it is not fun at all.

well google map is showing the only way to Ludlow is via US-95 S/Rte 95 S and it is a 11 hour detour or there is a 13hour detour shown also those might be the only ways to get there.

We and others have looked a bit at those roads. These are mostly unimproved roads and some are invariably private. I wouldn't trust them.

Hi: I'm out in the Ludlow area on occasion (on the way to Parker AZ) and will attempt to site survey the route in question. Will be in the area early feb. It's of interest to me as the club I ride with, pch Randonneurs, has a route or two from Las Vegas to the LA area. Enjoy!

Yes, please stay in touch. You can reach me directly at jhmilykoATadventurecyclingDOTorg

Thank you for all your hard work Jenn and ACA. California is a challenging environment from governmental standpoint and I appreciate how hard it is to accomplish anything no matter how reasonable the request. Time to switch routes for me. Southern Tier to New Mexico then north to the TA and beyond (May 2015). I'll have to wait for the Route 66 trip.

Thanks, Todd! it's always good to have a trip on the docket.

Well if they don't want us traveling the interstate make them repair the roads so they will be rideable Or specify on the maps off road tires are required for this section you should carry a extra tire anyway if you go to far and print the maps and be done with it .We are not ever going to have perfect routes cause of traffic and hater's so we as travelers half to take the good with the bad sad but true

The county is doing the best they can with limited funds. Right now the priority is repairing the bridges damaged in a bad storm in September 2014. Other improvements are not funded at this time. With the bridge closures there are no options to get from Fenner to Ludlow except on I-40 where it is currently illegal for cyclists to ride. This is our request, that I-40 at least be open to cycling when National Trails Highway is closed.

I appreciate you sharing your perspective, thanks.

Oh I thought it was just road damage and refusal to fix the roads . Well the bridges are completely out there then huh and there is no county road that can be a detour at all so I take it that orange line between fenner and Ludlow is I 40 correct. What is that highway goin up and around that big green section in the middle of the map? Is that also I40 ? And how long is that section between fenner and Ludlow ? Just curious .

A correction to my prior response: My colleague, Melissa, pointed out to me cycling is not legal on that part of I-15, either. It is for a section further west but not directly north of Needles. So unless there are continuous frontage roads or other county roads, that routing is not a solid option.

Nope, no other county road through there.

Yes, the orange line is I-40. It is approximately 58 miles between Fenner and Ludlow on I-40.

The north-south highway just west of Needles is US 95. To use that cyclists would have to go very far out of the way to connect to I-15 and continue westward which is a much busier interstate. I don't know off hand what the condition of US 95 is for cycling.

All interstates should be open to bikes other than ones in cities that have plenty of alternatives and many dangerous exits. Bikes are legally allowed to ride on interstates in many states and there have been no issues from it. A ten foot wide shoulder is safer to ride on than a busy two lane highway with little or no shoulder. Safety is not the issue. It is an arrogant cars are better than lowly bikes attitude left over from the 1950s when freeways were marketed as a luxury road free of bikes by bike haters. Court cases have ruled for bikes having equal access. I have ridden thousands of miles on divided roads without any problems and in fact felt safer than many bike approved roads.

Thanks for chiming in with your experiences, Jim!