Three Routes: Choose Your Own Adventure 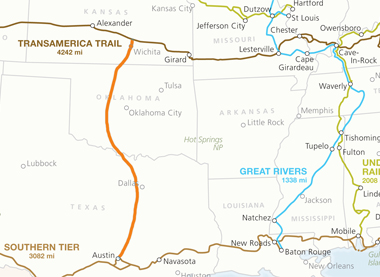 Looking at our route network the other day, I was thinking about loop routes and connections. The wide open gap across the south central United States caught my eye. Then I remembered hearing something about the Chisholm Trail.

The historic Chisholm Trail was developed after the Civil War to move cattle from Texas north to Kansas. A growing railroad presence could then be utilized to move animals eastward where the majority of the U.S. population lived.

Texas? Kansas? An idea formed. What about starting in Austin, Texas, on the Southern Tier riding east to New Roads, Louisiana, then north on the Great Rivers route to Cave-In-Rock, Illinois, then west on the TransAmerica Trail to Newton, Kansas,TransAmerica Trail and then south on a self made route of the Chisholm Trail back to Austin?

Doing a rough calculation, that's a route of about 2,400 miles. Not shabby and chock full of history, a variety of scenery, some tried and true routing as well as an adventurous leg not often visited by touring cyclists.

Like other historic trails, there were probably many routes to achieve the goal of moving cattle from Texas to Kansas. The one easiest to follow today would likely parallel U.S. Highway 81. One man in Kansas is actually working to create an official Chisholm Trail route for cyclists to follow. I imagine the folks at the Chisholm Trail Heritage Center might have some other suggestions for routes to research as well.

If you decide to take on a tour like this, let us know how it goes. Or maybe it's just good fodder for some early spring bicycle tour daydreaming.