The Rolling of the Bulls 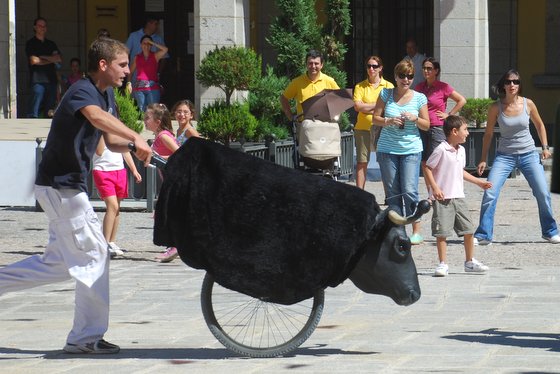 Even if you've never traveled in Spain, you have probably seen images or video of the "running of the bulls." The most well known "running" is in Pamplona, but many other cities in Spain and Portugal have their own versions. Runners, dressed in white pants and shirts with red scarfs and waistbands, run down the narrow streets in front of large, charging bulls.

I've never had the urge to participate ... not even close. But a day's bicycle ride out of Madrid, we came upon a tamer tradition that had us laughing with delight.

I'll call it the rolling of the bulls.

We heard the music, drums, screams, and laughter coming from a town square and had to investigate.

Instead of adult runners fleeing from thousands of pounds of angry bovines — you get scores of giggling kids running from realistic bull replicas rolling along on a bicycle tire.

And the rolling bulls have squirt guns built into their horns. How cool is that?

The kids never tired, but the young men pushing the rolling bulls did have to occasionally stop for a rest and a well-deserved beer.

Rack up another amazing use for the bicycle wheel. 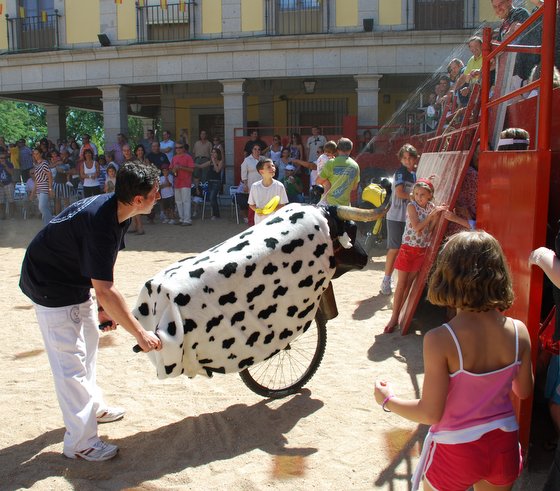 That's awesome! I need to build one of those bicycle bulls for my hometown. It would be perfect for parade days and such! Very cool. The squirt gun in the nose is a great idea!