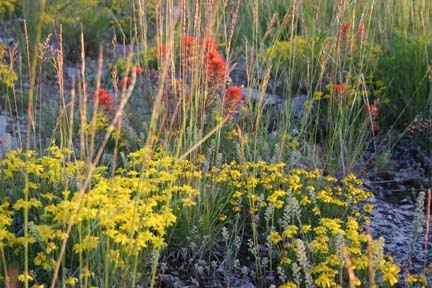 Spring may be here, but it hasn’t sprung at our place in the Wyodaho Tetons. We have four feet of snow on the level, and it's still coming down as I write this. But just across the road there’s a foothills ridge, wind-scoured and south-facing, that will be free of the white stuff soon. Talk about a microclimate; it’s a desert island — prickly pear cactus even grows there — in a sea of dense conifers. Before long it will look like this photo, which I shot a few years ago.

But even though I’m still skiing, the vernal equinox always puts me in mind of ride planning. If I were to jump in the truck and hit the road today with my bikes — both mountain and road, of course — I would head straight for one of these places:

San Rafael Swell, Utah. Late March might be pushing the weather envelope a bit at this million-acre-plus gem, but that’s okay. Cool canyon camping at its best. Thursday’s forecast: Mostly sunny and 57 degrees.

Death Valley, California. A smorgasbord of backroads for mountain biking in a surreal, national-park environment. Thursday’s forecast: Mostly sunny and 88.

Big Bend Ranch State Park, Texas. I’ve been hearing reports that this hidden Chihuahuan Desert treasure is getting really popular with the Lone Star State mountain-biking crowd. Gotta see it for myself. Thursday’s forecast: Mostly sunny and 84 (but Wednesday, sunny and 95 ... gadzooks).

Sedona, Arizona. Besides the outrageous redrock road and trail riding this area dishes up, I like the fact that the town and state names rhyme. Perhaps that's partly responsible for Sedona’s reputation as a place of harmonic convergence. Thursday’s forecast: Sunny and 70.

That's where I would go, but I live in the Rockies. You upper Midwesterners and Northeasterners: What hot cycling spot would you head for if you could jump in the car today and be there tomorrow?