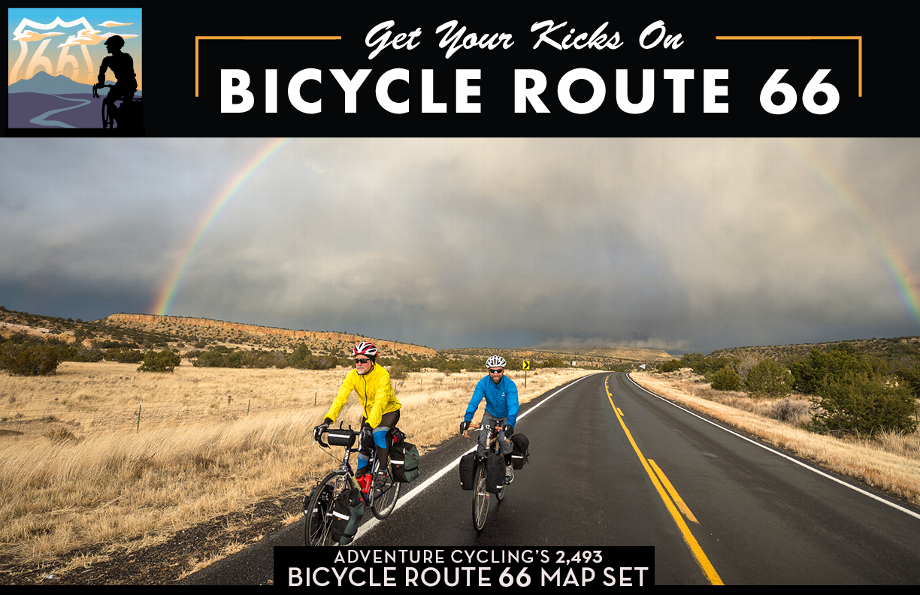 We are happy to announce that our conversations with District 8 of Caltrans (California Department of Transportation) regarding the use of I-40 for Bicycle Route 66 have reached a successful conclusion!

On February 10, we had a conference call with District 8 to discuss solutions to the problem of cyclists' legal access to travel between Needles and Barstow, California. They had done their research and came back with options for us including a stretch on I-40 as requested. However, we still had some major concerns about a second stretch.

The district offered to go out to the affected areas with members of their staff and a representative of ours. We agreed this would be a good way to resolve this final question. Amongst ourselves we discussed who we might know in the area to accompany them.

While we were putting together a list of people to ask, I received a fortuitous email from a board member who happened to be in Death Valley, California — less than 200 miles away from Barstow — driving east. Voila! Our representative came to us. On Friday February 13, he was on the road with the head of maintenance for the district and a senior transportation engineer.

After this on-the-ground review, all had a clearer picture of the situation, needs and potential solutions.

As of Wednesday, February 18, we now have a legal route to direct cyclists to use between Needles and Barstow, California, where the roads are either closed or otherwise unridable. While the printed maps will show our route as using the National Trails Highway, addenda will accompany them directing cyclists where they may now legally enter and exit I-40 to avoid the worst of conditions.

District 8 has granted allowance of "...temporary access on I-40 from Ft. Cady Rd. (Exit #23) to Ludlow (Exit #50) and from Kelbaker Rd. to Mountain Springs Rd. (Exit #115)..." Access will be lifted in the future when road surfaces have improved and roads reopened. In the meantime we are moving forward and celebrating more than a little bit.

In his latest email correspondence, Catalino A. Pining III, Deputy District Director of Caltrans District 8 assured us, "The District will be notifying the California Highway Patrol of the temporary provision. Existing signs will have to be temporary covered/modified to accommodate the bicycles and additional signs will have to be ordered to notify the traveling public of the shared road. It can take two to three weeks to have the new signs fabricated and installed."

Truly, this is music to our ears! In my over 15 years at Adventure Cycling, I believe these past few weeks will be ones I long remember the most for their frustration, stress, collaboration and finally euphoria with the successful result.

Thanks go out to many people and organizations for helping us to bring about this resolution:

Our Bicycle Route 66 Section 6 map puts cyclists on I-40 from Exit #139 to Exit #133 which is the exit for access to US 95. In Needles cyclists are guided onto local roads.

I hope this helps.

I'm planning a trip where an Amtrak train drops me and my bike in Needles and I ride to the Mojave Preserve (and back). What is the story with riding on the section of I-40 between Needles and 95? I don't see it included in any of the discussions or maps here.

Many thanks for any info.

Do you guys happen to know when will open Route 66 back up? I am happy about the i-40 workaround but would ideally ride the 66. I plan on going in April 2016 so that is still half a year out. If you have any ideas on what the timeline is for re-opening, please share it here if you could.

These areas are maintained by San Bernardino County. They do not currently have the funds to repair them. I would not expect them to be officially open by the time you pedal through.

I road my recumbent bicycle with trailer solo, self contained from San Diego to St. George Utah this past fall (early Oct 2014) and used the National Trails Highway (Route 66) on route. I happened to travel shortly after the weather damaged portions of Route 66 and want to let you know about my adventure. I entered the National Trails highway coming from the south at Amboy (Roy's Cafe) and traveled east with full knowledge that the road beyond Chambliss was closed. I had discussed the condition with Caltrans and some local folk a week before my trip. Interstate 40 was not an option then for a bike as you well know from your numerous meetings with CA District 8. I used closed route 66! As it turns out my ride east through Chamblis to Fenner along Route 66 was one of the most fantastic rides I have ever taken. Local traffic was allowed (residents, postman etc) but I never saw a person or a vehicle. There were two or three damaged bridges that could not be used so there had been constructed very brief dirt road bypasses around them that were easily passable on a road bike. I camped at an old road side rest area from the 1950's. I never saw an automobile for some 25 to 30 miles. Continuing on in the morning I went through Fenner and Goffs and then left route 66 turning north on Highway 95 heading up to Boulder City with an overnight stop in Cal-Nev-Ari and breakfast in Searchlight. I don't recommend highway 95 for cyclists! Especially in California, Nevada highway was much better with shoulder. I'm not sure if this comment is worth anything to you but I just wanted to share some of my experience with you after reading your article about the challenges of getting permission to use I40. I'm sure route 66 is more fun than I40!!! I hope it gets opened to bikes soon!

Congrats on making a huge move forward for the safety of cyclists and motorists alike. All parties have shown, you work together, it's a win win.

I guess that means we need to ride route 66. If for no other reason than to look at the signs Peter Frampton - Show Me The Way