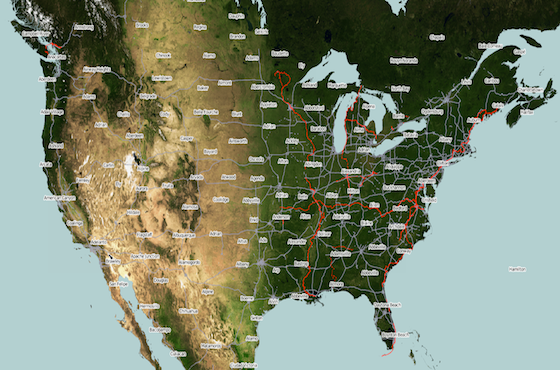 Meet Steve All, a software consultant and OpenStreetMap contributor whom Adventure Cycling volunteer Kerry Irons has worked with for the past several months. Kerry saw the potential for using an open-source mapping project to communicate route information both during the implementation process and after routes are designated. Once Kerry and Steve connected, good things started happening.

Steve, a California-based contributor to the OpenStreetMap (OSM) Project said, “being a volunteer in a worldwide project contributing geographic data to OpenStreetMap is both fun and rewarding. It gives me that feeling of giving back to the community that any good volunteer project does, like helping out at a soup kitchen or writing encyclopedia articles for Wikipedia. And, the resulting maps look great!"

Together with Kerry, Steve cleaned up OSM's data representations of both the U.S. Bike Routes and other "quasi-national" bicycle routes, like the East Coast Greenway and Mississippi River Trail. Now OSM displays an up-to-date and valid representation of the U.S. Bike Routes for both actual and proposed routes. "You might say that Kerry spoke the semantics of where routes really ought to be on the map, and I played syntax on keyboards" says Steve. This "conversation" speaks to thousands of miles of bicycle routes found in the nascent and growing U.S. Bicycle Route System (USBRS). "Kerry really has a finger on the pulse of statewide activity on the USBRS and his patience and resourcefulness allowed our efforts to become accurate results in OpenStreetMap."

Kerry and Steve exchanged dozens of emails to better understand where national bike routes actually were and weren't on the map. A number of routes not yet established were in OSM where they shouldn't be, leading to confusion among mappers, consumers of OSM map data, and even statewide USBRS coordinators. Recently, OSM's map creators caught up with the flurry of edits, and the results look great. "It's neat to see the eastern part of the USA and Alaska blossoming with accurate and connected national bicycle routes" says Steve.

The maps can be viewed in seperate layers that include both designated and proposed routes and are a great tool for those who would like to start initial research towards proposed route implementation.

The next step to aid those wishing to use OSM was to update OSM's wiki documentation: a history of the USBRS, a how-to guide to help OSM contributors understand how USBRs fit into OSM's bicycle routing hierarchy, and an up-to-date status report of ongoing route proposal activity in OSM. Dashed red lines in OSM showing proposed national routes can help states coordinate their efforts to gain routing consensus before an AASHTO application for a new USBR. The wide and democratic availability of OSM makes statewide efforts in national bike route coordination something more people can both see and get involved with as the proposed routes under discussion are readily visible.

Thanks to Kerry and Steve paving the way for this project. OpenStreetMap will continue to communicate progress and growth in the USBRS. With the aid of USBRS volunteers and OSM contributors, this resource will close the loop for communicating route information to decision makers and the general public. And thanks to its wiki-based pages and map rendering updates, OSM can to do so in nearly real-time, as state DOTs, stakeholders and the public work together to develop new routes.

OSM continues to grow in terms of bicycle features. For example now mapped are 24/7 repair stations:

My mother taught me "an attitude of gratitude" and "an air of humility." I am grateful for accolades received for efforts Kerry and I extended, but accolades are not why we did this. It was about listening to OSM contributors "wanting bike routes done right," and responding by taking initiative. We can do this! (In fact, we should: it makes for awesome, strong organizations).

In fact, a board member recently did offer Kerry and I kudos (his word) in the OSM talk-us pages (the mailing lists you mention and we frequent): http://lists.openstreetmap.org/pipermail/talk-us/2013-October/011988.html . So, Charlotte, there you go! Kerry and I didn't need such imprimatur from OSM US' board, but it is delightful we received it, as Martijn van Exel is a smart, well-connected and active board member. OSM is a wide organization (with over 1 million registered contributors worldwide). The national membership organizations are chartered to help further progress in the larger OSM effort, on a countrywide/regional basis.

In membership organizations like OSM (and ACA!), when a member listens, gleans the consensus of other members, rolls up his (or her) sleeves, and takes initiative, especially with the good spirit and collaboration of others, things can happen! (No "board approval" necessary).

Though, I'll be the first to agree: it sure is nice when we get it!

This article would have been better if it includes someone from the board of directors of the US Chapter of OpenStreetMap? They are the ones who can speak for OSM-US. They could have talked about what OSM is doing for cycling routes. As I recall there was extensive back and forth on the mailing lists because many people in OSM feel the cycling routes are important and want them done right.

Thank you to John Sieber and China Visa for your warm comments.

JohnnyK: A lot was compressed into that article, so some additional helpful information had to be left out. There are many ways to view ("render") the underlying OSM data, via different renderers. The one displayed above is actually called OpenCycleMap (the "Cycle Map" layer on OSM's Layers button, sometimes called OCM). You can find a simple key/legend for this map rendering at http://www.opencyclemap.org/docs.

There is another renderer that shows only actual (not proposed) routes at http://cycling.waymarkedtrails.org/en/?zoom=5&lat=39.1&lon=-85.7&route=1#routes but colors are different (blue=national, orange=state/regional, purple=local). And you have to be zoomed in close enough to see state/regional and local routes. Try zooming to a national level and clicking the Routes button.

The OCM renderings do in fact show navaids like bike shops, water sources, pubs/cafés/restaurants, touristic attractions, restrooms, crossings, etc. in addition to the routes which are entered -- you just have to be zoomed in close enough and of course they DO have to be entered into the underlying OSM data. Many details are shown: whether bike routes traverse dedicated bike pathways (dark blue lines), painted/striped bike lanes (blue "casings" on roadways), single-tracks/double-tracks (brown dashed lines with green/mountain bike coloring) or are simply signed as a "Bike Route" on a street or avenue.

What makes OSM so useful (to the endeavor of growing USBRS, and other applications) is that it is viewable and editable by anyone. If your state is growing a USBR (or two), all involved parties can use the map as a shared fabric: this is what is meant by the map being a "visual conversation." Also, as OSM is "live" data (it can be and is regularly updated to keep pace with reality), it can keep up in nearly real-time on a smart phone or web browser, in your shirt pocket while you ride! For example, San Francisco's Bay Bridge recently opened a few days early, and OSM was updated to reflect this just today!

Andy (and others): you can put routable OSM data on a Garmin device (microSD card/chip) using maps available at http://daveh.dev.openstreetmap.org/garmin/Lambertus/latest. There are even bicycle-specific Garmin resources available on the OSM wiki pages. OSM is a wide project, rich with resources. We bicyclists are some of the luckier ones!

Yes, OSM remains a relatively young project, but it is a vibrant and growing one. It may take a decade or three for this map to be "done" (whatever that means, as reality is constantly changing). While doing so, OSM endeavors to reflect on-the-ground reality as well as its contributors are able to describe it. OSM is a useful map for many today, but it is just going to get better and better. You don't have to contribute (though you can), you are perfectly welcome to just use it. Enjoy!

Thanks for all of the great information about OSM and OCM.

Feeling really very proud for Kerry and Steve. They are doing an interesting project. Wanted to read more..

This is great news! I use a website that compiles the OSM maps to then be used on Garmin GPS units, which is free and routable. I'll have to look around for the updates. I've been making Google Maps and OSM updates for several years and hope that others have benefited from it.

The only issue I have with OSM is that there is only a key for the standard map. How do you read a map without a key? Please explain the color coding and the other symbols and numbers? Otherwise it's just a picture with lines on it and not much use. Anyway OSM is a noble try at being a free map but it is no more useful than a paper map. There is no navigation aids nor is there specific data about the route or path. IMHO OSM gives you far less than what you can get from commercial offerings. It's just not mature enough to provide solid information for the Bicycle traveler. It needs a lot more data. It would be really cool f there were notes on distances between water, food, and lodging services. Well I guess in another 10 years it may be ready but for now I guess we are stuck with commercial offerings.

Thanks Kerry and Steve. This is an exciting development and an excellent opportunity to make USBRS data available to everyone.