As time passes roads are improved or fall into disrepair, paths are created, conditions become more or less favorable for bicycle travel. In response, we adjust our routes to accommodate these changes. Sometimes route changes happen due to safety issues such as the reroute we implemented across North Dakota in 2012. Often they are minor adjustments. Happily, route changes also occur because opportunities arise to incorporate new developments.

Donn Olson, who manages a Northern Tier Cyclist Only Lodging and Camping location in Dalbo, Minnesota on his property, contacted us in 2010 to let us know he had been directing cyclists passing through his bunkhouse to use the Minnesota rail-trail system and was hearing rave reviews as a result. We were intrigued. Coincidentally, later that year we also received a packet of research from a group of cyclists in Minnesota containing suggestions that mirrored Donn's.

Unfortunately, timing is everything and these suggestions arrived while we were in the middle of converting the two effected map sections — Northern Tier sections 5 and 6 — to our new Geographic Information Systems (GIS) process. There simply wasn't time to implement such an extensive reroute. We were forced to settle for including information and weblinks in the Riding Conditions area of the map.

When these two sections came up for reprint recently, Routes & Mapping Director Carla Majernik built in some extra time to bring the changes to the maps. GIS Specialist/Cartographer Nathan Taylor was asked to take on this updating task. 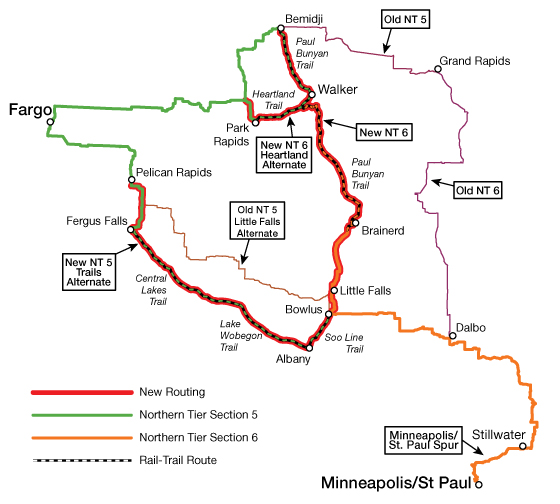 We are happy to announce these maps have been received from the printer and are now available for purchase!

All, or parts of, five different paved rail-trails — Central Lakes, Lake Wobegon, Soo Line, Paul Bunyan and Heartland — now make up about a third of those two map sections on the main route and alternates. 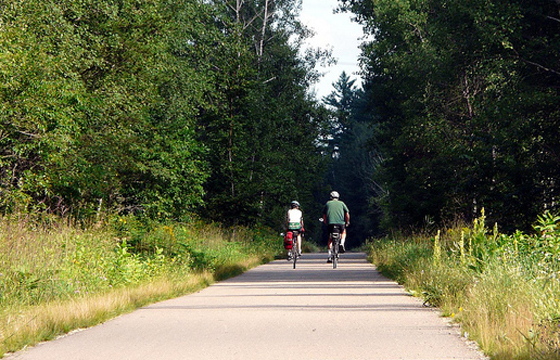 While working on the maps, Nathan got to know the area pretty well, at least from an in-the-office map point of view and says the area is pretty interesting, "The Central Lakes Trail traverses an area heavily influenced by its Norwegian settlement history and an archaeological object of interest — the Alexandria Runestone. Garrison Keillor dedicated the grand opening of Lake Wobegon Trail, rode through several communities along the new route, and even wrote a song about the trail and performed it on Prairie Home Companion. The Paul Bunyan Trail visits many small towns that have erected various statues and monuments to Paul Bunyan, Babe the Blue Ox, his wife Lucette, even a water tower shaped like his fishing bobber." What's not to love about points of interest like these?

You will have to choose one set of rail-trails over another if you're riding these sections as part of a cross-country journey. If you're looking for a tour of 500 miles or less, the two sections when purchased together create a great loop route. 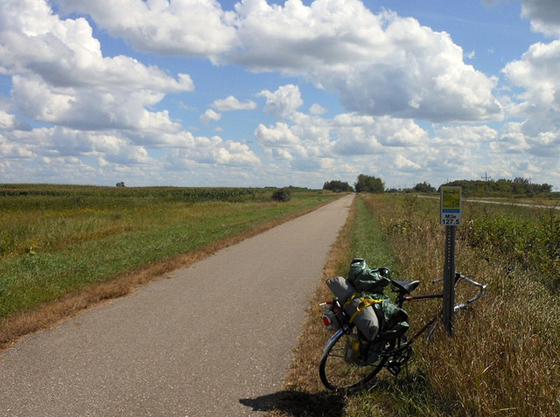 There are services available at regular intervals and plenty of camping opportunities in national forests, city parks, and state campgrounds. A bonus of traveling by bicycle in Minnesota is their Department of Natural Resources' statewide No Turn Away Policy. Cyclists and hikers arriving at a full state park campground will always be accommodated.

We look forward to hearing your reports of this new routing.

Photo 3 On a bike trail outside of Osakis, Minnesota from all the suns are blue tonight's Flickr photostream

Yea! Love to see the enthusiasm. Let us know what your experiences are on these trails when you get out there.

A friend and I rode the Paul Bunyan and Heartland in 2012, and enjoyed both trails. Good wildlife viewing - we were under trees with three eagles, for example. We also circled Lake Bemidji.

I took the Central Lakes trail last summer as I rode NT. It was a typical bike trail -- pretty much dead flat but NOT sheltered from the 30mph headwind I was riding into.

The only comment I had was it was difficult picking up the end of the trail in Fergus Falls. I was winging it, and I would expect the AC maps to give explicit directions, but the trail access signs directed me through a huge city park. I looked everywhere for the trail and didn't see anything. I asked every person I saw where the trailhead was -- nobody knew. Finally I found some guy who told me how to get on a bike trail -- but he didn't know if it was the Central Lakes trail. The trail he directed me to merged into another trail, which was the Central Lakes trail. I believe the main trail started at MN Hwy 210 and had I been riding along that road I probably would have had no problem finding the trail.

Sorry to hear about the confusion finding the Central Lakes Trail in Fergus Falls. We do have an inset detail map of that location on the new Northern Tier 5 map. Hopefully this will prevent others from experiencing this difficulty. Thanks for chiming in.

Kudos to Donn Olson. I rode the Northern Tier in 2012 and talked to Donn before I entered Minnesota. He suggested the Central Lakes trail, and I am so glad I took that route. Great change to the official NT route. Donn is an example of someone going the extra mile to make a difference.

Great!! I'll be riding those trails this summer!! I can hardly wait!

That's so great! I've heard there was a pretty extensive system in Minnesota. I want to go ride the Lake Wobegon Trail now!

Great story. I think what this really tells us is that we, as local members, should not be shy about making route suggestions. There are some areas on some routes that are just tough to deal with. There are other areas where ACA staff just can't be expected to be aware of all opportunities.

Mark, Yes, thank you for making this point! We welcome route change suggestions. We can't always act on them as quickly as you -- or we -- might like but there is nothing like local information for improving a route.