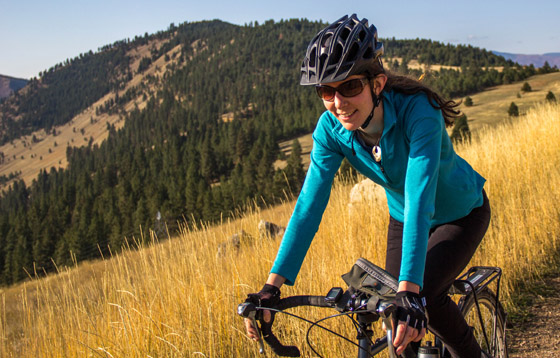 Meet Saara Snow, the most recent addition to the Adventure Cycling team. Saara joins us as the new Travel Initiaitives Coordinator. In case you're wondering what that means, Saara will work to ensure better bicycle-travel conditions across North America and she will assist with the on-going development of the U.S. Bicycle Route System. Saara hails from Olympia, Washington, and comes to us with bicycle touring and non-profit experience, and even better, she's volunteered her time to help with the U.S. Bicycle Route System in the past. Saara is a wonderful addition and we are thrilled to let her tell you a little bit more about herself.

Tell us about your background.

I moved to Missoula to attend the University of Montana in 2006, and graduated with a bachelor's degree in Environmental Studies and Spanish. After graduating I worked on two different Americorps Conservation Corps trail crews in Montana and Washington, and also with the Northern Plains Resource Council doing research on clean energy issues. After a 5-month trip through Europe and Morocco, I realized that I missed Missoula and moved back here in 2011. This last year I worked at the Missoula Public Library and volunteered with Adventure Cycling and the Bike Walk Alliance for Missoula.

How did you find out about Adventure Cycling? Why do you want to work here?

I found out about Adventure Cycling through my good friend Erin whose mom, Sheila, has worked here for a long time. I had been talking about doing a bike trip for a while, so I joined Adventure Cycling and used the maps and resources to finally make it happen. That bike trip from Florida to Louisiana opened my eyes not only to how amazing bike travel is, but also to how much work needs to be done to make bike touring (and commuting) safer and easier. When I learned more about all of the great work that Adventure Cycling does in the bike-touring world and got to know some of the staff, I realized that this was exactly where I wanted to be.

Tell us about your experience bicycle touring.

My first tour was a self-supported tour from Tallahassee to New Orleans, which was also my first time in the southern U.S. My friend and I rode along the coast and followed the trail of Mardi Gras beads all the way to Mardi Gras. We received such amazing hospitality from complete strangers through warmshowers.org, which inspired me to pass that on to travelers coming through Missoula. Since then I have done a handful of shorter trips around Montana — around the Pioneer Mountains, through the Swan Valley, and up the Mission Valley. There is no shortage of beautiful places to ride in Montana.

Tell us about your interest in bicycle advocacy.

I have always been a bicycle commuter since I’ve never owned a car, in part because I love cycling but also because I believe the best personal way to make a positive environmental impact is by not driving. It’s also been shown to contribute to a healthier community and economy, not to mention an increased sense of empowerment when you travel hundreds of miles on your own power. So there’s really nothing not to love about bicycles, which is why I’m so passionate about bicycle advocacy.

How have you already been involved in helping with the U.S. Bicycle Route System?

I volunteered with Adventure Cycling this last year and helped find a Canadian bicycle-advocacy group that was interested in creating a route through British Columbia that would connect Alaska’s U.S. Bike Routes with a route in the Lower 48. I set up online meetings and eventually helped get a conversation started between the BC group and an active group in Washington State.

What are some of your hobbies?

I have a twin sister (don't worry she lives in Olympia!). Also my name has three A's because my mom is from Finland and the Finns love their double vowels (but it’s still pronounced like “Sara”).

A perfect world would include or be...

Thanks Saara. We know you're hitting the ground running. We're happy to have you on board.

go getem Sara and look forward to meeting you when we come out from North Carolina next spring for vacation..