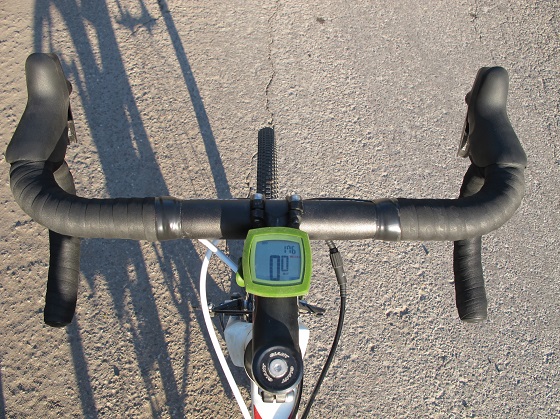 For me, the Knog Nerd cycle computer was a long anticipated addition to my handlebars. I nearly swore off cycle computers entirely, solely because the mounting brackets they often use tend to be low quality and a pain to swap from one bike to the next when I'm in a hurry.

Much like Knog's head and tail lights, the Nerd cyclocomputer sits inside a Silicone casing, which also acts as a strap that makes installation and removal almost too easy. You can pop the cycle computer out of it's casing and turn it 90 degrees to make it readable while mounted on either your handlebars, or your bike stem. The cycle computer is wireless, and transmits from a matching Silicone transmitter that straps to your fork and reads off a basic magnet attached to your spoke.

The Knog Nerd has a couple different tiers offering a range of price points and functions. The base model comes ready with five basic functions, which are current speed, clock, trip distance, total ride time, and odometer. The mid-range option adds average speed, maximum speed, relative speed, and a scanning feature that auto toggles through the various modes. The top end model takes all the features previously mentioned, and adds on distance per day, a display backlight for night riding, and a multi-bike feature that allows you to collect data for two separate bikes. These units will run you $50, $70, and $90 respectively.

Accessing any of the functions on the computer is about as easy as it gets. The screen acts as your only button, and pressing it with minimal force will toggle you from one mode to the next. To reset your current ride information, simply hold down the button for a few seconds, and you'll be back to zero. As for the screen itself, it reads crystal clear, and with a large easy to read digital display.

Right now, this is up there as one of my favorite bike accessories. It's available in a multitude of colors, so you can match it up to your own personal aesthetic.

Can you tell me where I can find a computer designed so that the mileage can be reset to facilitate matching the cue sheet mileage when starting from a point partway along the course at a bike rally?

My wife & I are old & slow & we don't enjoy the often heavy traffic near the hotel where most of the tour options start. We often drive to a church yard or some similar parking area along the route for a remote start, & a shorter task, but the cue sheets are more difficult to use when we do this.

I have not tried this brand or model. However a previous wireless Cateye that worked perfectly had to be replaced with a wired version. The wireless interfered with the operation of my GPS unit. Something to look for and consider.

I have a handlebar mount for my smartphone and still use a cycle computer. I specifically moved DOWN to a more simple, 5 mode unit because the rest were more distracting than helpful. I don't need to know altitude and air temperature and average speed, etc. A simple speedo,odo,elapsed time, clock and trip odo unit gives me the information I want at the touch of a button without having to stop and fumble through an APP on the smartphone. The phone is then primarily an active map, camera and communication when I need it. I'd rather my attention directed to the road and the scenery than my digital performance. It's a matter of preference. For those who hate techno-gadgets or those who want the latest with the most functions, more power to you. Aluminum or steel? Tandem or two bikes? Hi-tech carbon road bike or recumbant? Part of what I enjoy about touring is finding what works best for me.