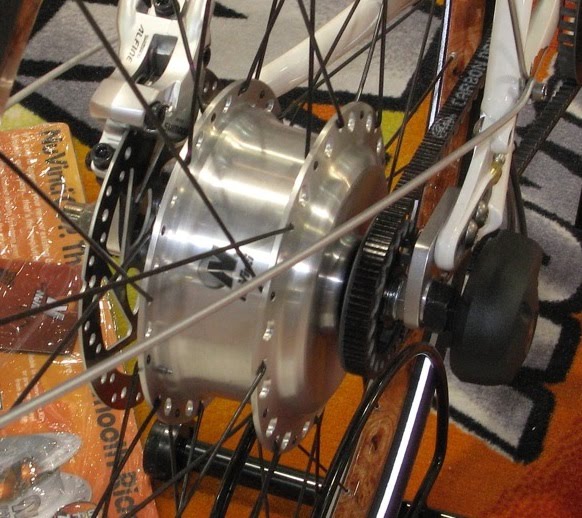 While we haven't seen a lot of domestic riders in the U.S. using internal hubs, our European and around-the-world cycling contingents have been heavily spotted with this style of drive train over the years. Why haven't internal hubs become widely used for touring? For starters, it's an aftermarket product that goes against the current standard. When you purchase a bike with a cassette and derailleur that works just fine, it's hard to put down more money on something that is already functional.

So why in the world would you want to consider an internal hub? Perhaps you want to ride around the world. The maintenance required with an internal hub is very minimal. Think of it as having your derailleur and cassette completely sealed inside your hub, safe from dirt and debris. While many people associate internal hubs with 3-speed cruiser bikes, they have advanced to compete with standard derailleur drive trains by offering 8-, 9-, and 14-speed options.

Since an internal hub doesn't use cogs like a cassette, 'gear inches' can be used to determine how hard or how easy it is to pedal. On a standard bike with a cassette and derailleur, you convert your cassette to gear inches by multiplying your wheel diameter by the ratio of the front chainring to the rear cog. For example, if you are riding a 26 inch wheel, and you are in the 48 tooth chainring up front, and 16 tooth cog in rear, your value in gear inches would be 26 x 48/16 = 78 gear inches. Just to give you a sense of range, the easiest gear on a mountain bike (22x34 cogs) would be around 17 gear inches, while the hardest gear on a road bike (53x11 cogs) would be around 130 gear inches. I hope that I didn't make that too confusing.

There are four major players when it comes to internal hubs (Shimano, SRAM, NuVinci, and Rohloff), and as much as I would love to run through all of them today, it might be a bit easier to break them down into two segments. Today I'll cover two of the more unique internal hub designs out there, the NuVinci and Rohloff.

The Rohloff Speedhub 500/14 has 14 gears that are operated by a twist shifter on your handlebars. While the hub will only accommodate a 32 spoke rim, it is built for symmetrical spoke lacing, meaning the spokes on both sides of the hub are laced in the same pattern. This style of lacing puts less stress on the spokes, and lets you get by with a lower spoke count. The only other limitation of the hub is that it is only available for 135mm dropouts (most road bikes have 130mm spacing).

One of the biggest benefits a touring cyclist can gain from the Rohloff hub is the gear range. Beating out all of the competition, it can give you a low end of 20 gear inches (close to the lowest gear on a mountain bike), all the way up to 110 gear inches (close to a 48x12 on a mountain bike). The shifts are spaced out nicely to keep the low gears closer together, and the high gears further away. The thought behind this is to give you smaller gear changes when you're grinding through a climb or headwind, and larger gear jumps when you have a Wyoming style tailwind at your back.

While the performance you gain from the Rohloff hub is top notch, the start up price can be a big hurdle. The hub, shifter, chain tensioner, and cables will run upwards of $1400, and from there you still need to lace it up to a rim. If you're going to consider purchasing an internal hub of this quality, you need to be thinking about the long term use. This is something we see on bikes that are out on the road for years at a time. While that style of touring is not for everyone, it gives you an idea of how rugged these hubs are.

If you want to drop down in price a bit, the NuVinci hub is a relatively new company jumping into the mix. It doesn't quite have the range of gears that the Rohloff has, but it does have a very unique way of shifting gears. From the low range to the high range, you have an infinite amount of gears. Inside the hub there are no cogs turning. Instead there are high density rolling balls that tilt as you shift to change their contact points on the transmission. This means you never have to worry about making a large jump from one gear to the next, as the transition is absolutely seamless. This system also allows you to shift at any time, whether your standing on the pedals, or standing on the ground at a stop light. With so few moving parts inside the hub, there are fewer parts prone to malfunction, and the manufacturing cost decreases.

The only issue for a loaded touring application is the gear range. While it can achieve a decent high range of 95 gear inches, the low range at 25 gear inches can make loaded climbs quite a challenge for some. Regardless of limitations, the hub, twist shifters, and cables cost around $400. It's 6-bolt disc brake compatible, and comes with either 32 or 36 hole spoke drilling, with 135mm dropout spacing.

Stay tuned for next week's Internal Hubs: Part II, where we'll take a look at offerings from Shimano and SRAM.

TOURING GEAR AND TIPS is written by Joshua Tack of Adventure Cycling's Member Services Department. It appears weekly, highlighting technical aspects of bicycle touring and advice to help better prepare you for the journey ahead.