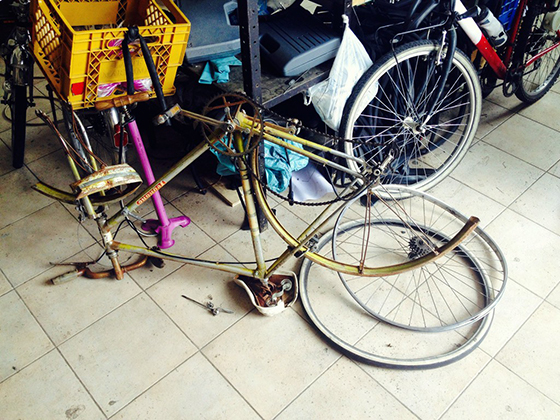 I had just finished my second year of university in the U.K., and I had roughly three months to kill until I began my third and final year. As is the case with most students, I had very little money and didn’t fancy working in my hometown all summer long.

This is when I began looking for ways to travel, but on the cheap. Whilst on my search, I came across two awesome websites: WorkAway and HelpX. These sites put you in contact with people who provide voluntary work overseas. You work four to five hours each day, and you get free food and accommodation in return.

With that, I paid my website subscription fee and began searching for opportunities abroad. As I had never really been to Europe, I thought I’d give it a go. Plus, the flight tickets were considerably less money than anywhere else!

A little researching had me settled on a one-way ticket to Le Puy-en-Velay, France, and I left the U.K. two days after completing my final exam. Other than the two weeks I’d organized to work on a Farm in the south of France, I had no plans. It was the most excited I’d ever been in my life!

Two weeks flew by. I saw a goat give birth to triplets, herded cattle, and had a little fling with one of my hosts. Long story!

Within that time, I’d also organized participation in another voluntary project — this time in Bologna, Italy. So after a few nights couch surfing in Toulouse and a surprisingly successful hitchhiking trip to Barcelona, I was on my way to my second project.

The project was to help renovate an old building that had been leased to a charity organization. I arrived just in time to help with lots and lots of painting! The downstairs of the building was almost complete and they’d turned it into a bicycle repair and recycling community project. So another part of my job was to take donated bicycles apart, which I loved doing.

One day, a bicycle was dropped off that caught my eye for some reason. It was a 1967 Legnano Sport Condorino. Though covered in rust, had bent handlebars, and only one wheel, as soon as I saw it, I thought: This is it. I’m going to ride this across Europe. 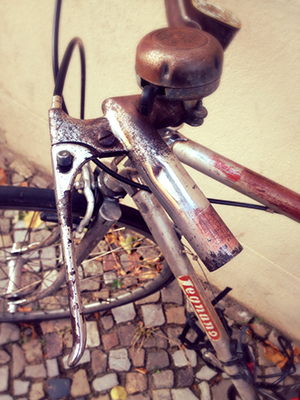 I asked my hosts if I could have the bike if I fixed it up. After looking at the bike and then back at me, probably wondering why I would ever want it, they said, yes! So I began using every bit of bicycle mechanic knowledge that I had. I pumped up the tires and then, with lots of help, got it back up and running again.

I decided to cycle to Berlin. It was roughly 2000km away, and my younger brother was going to be in Germany around the same time. I had nothing left to do but get on the bike and go. Now this was a proper adventure!

When telling people what I was going to do, they were shocked I was attempting it on the bike I had, and to tell you the truth, I was a little nervous myself. But I knew a belief in myself was all I needed to succeed and I’d be fine.

I had left the U.K. with no intention of cycling anywhere, carrying a large backpack. This had to be sent home with only a few items of clothing being left behind. In hindsight, I probably should have told my mom I was doing this, as she was a little shocked when my backpack turned up on her doorstep!

Now, with 90% of my belongings back home, I knew I had to commit. I went to the nearby shop to stock up on bicycle bits like panniers and water bottles. I used an old bike rack from the recycle center. One of the volunteers kindly welded it onto the bike, as there was no way to attach it to the 50-year-old road frame. 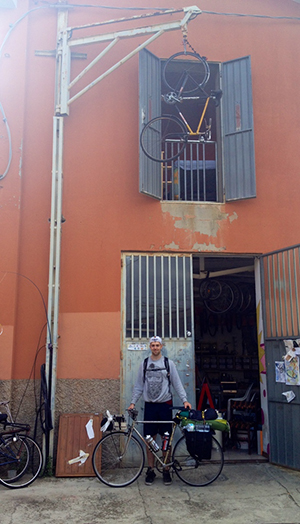 The night before I left, I said my goodbyes to the people I had met. I spent two hours changing the brake cables (I told you I was rubbish at mechanics), and ceremoniously attached a Micky Mouse bell onto the bike for good luck. 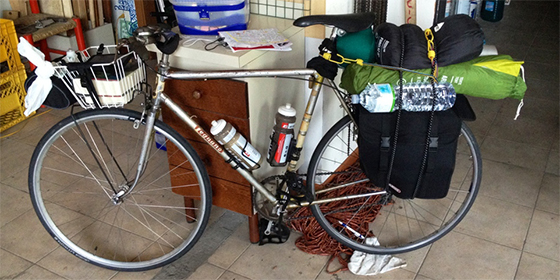 On the first day, three of the back wheel spokes broke. This buckled the wheel so badly that the bike was completely unridable — not sure Micky was doing his job properly! All I had was a big spanner which was of little use. I would have had no idea what to do even if I had the correct spares.

To make matters worse I forgot to put on any sunscreen, so my pasty white complexion was burnt to a crisp, and bizarrely, a bee stung me on my chest. Even before that, my back and arse hurt so much that I had to tie my thick jumper around the seat for some comfort.

But putting those small inconveniences aside. I was able to push the bike to a big lake underneath a motorway bridge. I met two guys fishing and although we were unable to communicate, we spent four hours fishing together. I showed them my bike and they gave me a lift to the nearest bike shop in the morning.

I was ready to go once more! 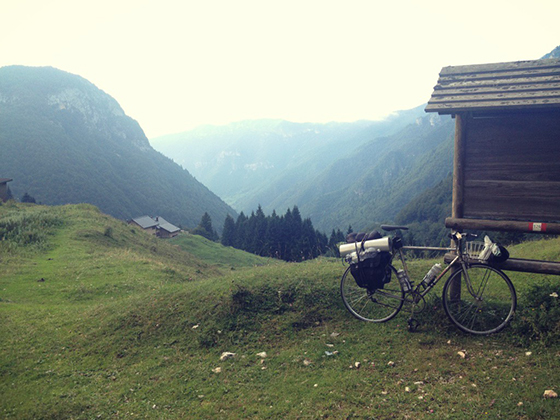 Over the course of the next month, I cycled over huge mountain passes that I had no idea were coming, cruised down the river Danube, and accidentally cycled on the motorway. All of it on my old rusty three geared bike that was I very quickly falling in love with!

I stealth camped or simply asked if I could stay in people’s garden most of the way. Somewhere on my journey, I was given a bottle of homemade Grappa. I then traded that for a nights sleep on someone’s garage floor. I’m not sure who got the worse end of the deal there!

On the way to Berlin, I decided I wanted to help with the build of a straw bale house. This took me on a slight detour to Slovakia and through the Carpathian Mountains. But by this point, I was getting into a nice rhythm. The miles were getting easier and cycling was just part of my everyday life. 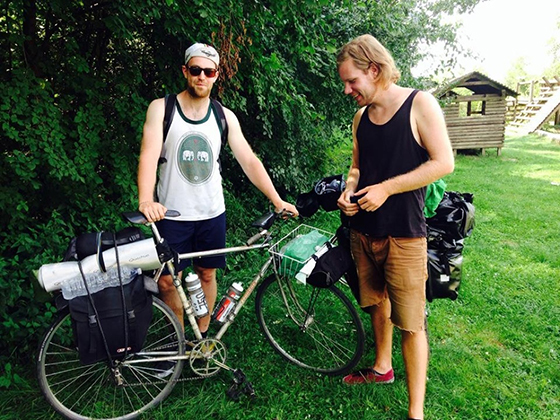 One day I manage to cycle over 160km. This was a huge accomplishment for me, especially as I struggled to cover 50km at the beginning. I was a lean, mean cycling machine!

From Slovakia, I cycled up to through Prague and finally Berlin to meet my brother. The last night of my trip, I camped in someone’s garden with a beer they’d kindly given me. I sat and quietly contemplated the accomplishment I was about to achieve.

It was not a huge world tour like I suspect the majority of people reading this post have completed, but it was easily the hardest thing I had ever done, and I was immensely proud of myself. With that, for the first time in a long time, I got upset … but then I realized I was being stupid, and besides, I still hadn’t actually reached Berlin!

Pulling myself together the next day, I strapped on my kit one last time and road as fast as I had ridden since leaving Italy. I arrived in Berlin early afternoon and went straight to the pub!

Here’s a picture of me in front of the Berlin wall with my beloved Legnano. 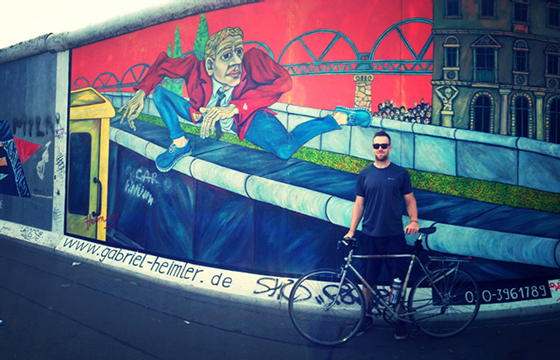 After a few days relaxing at our hostel, the owner mentioned that his bicycle was recently stolen ... I knew exactly what to do. I took off my lucky Mickey Mouse bell, snapped a few last pictures, and gave the bike to him.

He was so happy, he gave my brother and I free beer for the rest of our stay. We then both flew back to the U.K. a few days before I started my final year of university.

When people asked me how my summer was I had no idea where to start!? Since coming back home, I graduated with a first class degree in public health, and I then worked and saved for 8 months until I had enough money to support myself for my next trip. I left the U.K. in September of this year to volunteer at a community bicycle center in Kuala Lumpur, Malaysia.

I have no idea where my life will take me now, but I’m excited about what the future will hold. 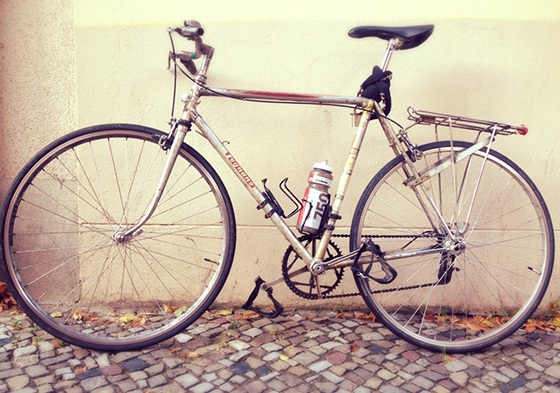 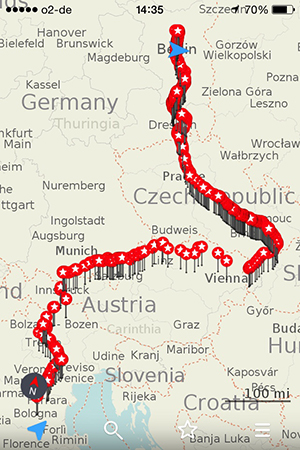 Mike McLeish is the owner of the bicycle blog Pinch-Flat. He’s currently taking full advantage of the of the warm weather in southeast Asia. You can find him cycling through traffic in Kuala Lumpur, attempting to drink coffee from a plastic bag, or eating asi lemak at a local corner shop. Follow him on Twitter at @Pinch_Flat and find more of this good stuff on this blog, pinch-flat.com

Editor’s note: Charles Siple, the father of our recently retired co-founder, Greg Siple, owned a Legnano racing bike that hangs on a wall here at Adventure Cycling — in the same chartreuse color. I'm looking at it as I type! Thanks for your great guest blog, Mike.