Following the Wheels of the World's Cycling Elite 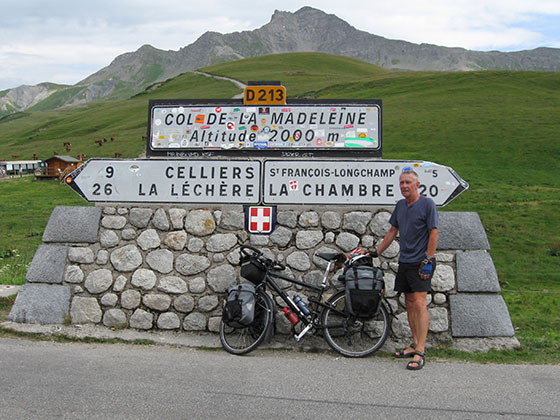 For years, I’ve watched the Tour de France on TV and soaked up the accomplishments of some of the world’s cycling elite.

As the years passed, I became more and more tempted to ride my bicycle on at least some portions of the routes of the professionals — hallowed ground for many cycling aficionados! 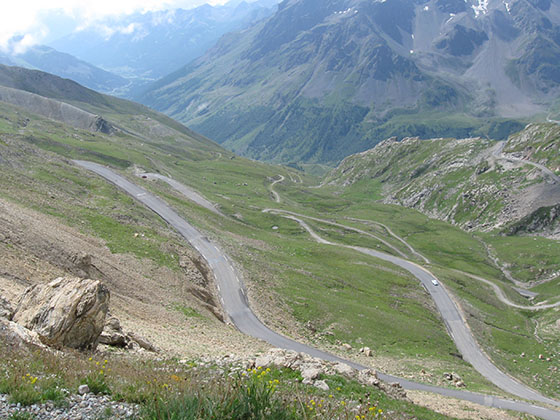 Each year, the Tour de France takes a different route, but some sections have been ridden more than others. In particular, stages in the Alps include climbs like the Col de la Madeleine, Col du Galibier, and Col du Telegraphe. The Galibier has been part of the Tour since 1911, hence my appetite for riding this celebrated mountain pass, and at 2,645m, the second highest pass in Western Europe. Riding my north to south route, I would have to challenge the Madeleine and Telegraphe to the mountain village of Valloire before climbing the Galibier proper.

Now, unlike the professional racers, my tour would not be on a featherweight road racing bike, but on a much heavier touring bicycle with its assortment of panniers and equipment — total weight somewhere in the region of 85 pounds.

The day after standing on the Champs-Élysées in Paris and watching the final stage of the 2008 Tour de France, I set off on my own 30-day tour of France!

A few days of cycling from Paris past bucolic French farms and innumerable fields of sunflowers, plus a rest day in the town of Annecy sampling lake and canal-side restaurant/bar fodder, did nothing to prepare me for the assault my body would endure for the following two days! 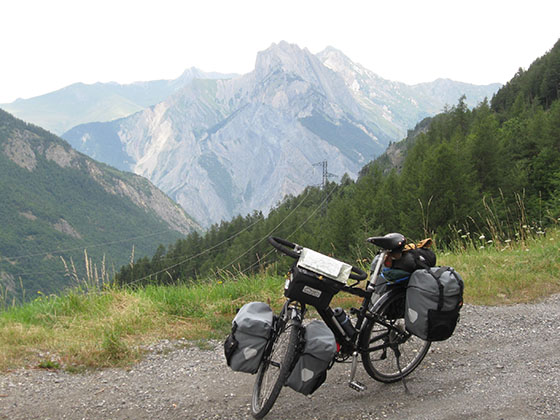 The day I left the playground of Annecy, heading for the Hautes-Alpes region, my big plan went a little awry!

The plan was to first ride the Madeleine and follow the next day with the Telegraphe and Galibier. Dreaming! The Col de la Madeleine climbs for more than 24kms with a listed average grade of 6.3 per cent. I was already into a long day when I reached the start of the climb where almost immediately, steep hairpin bends at grades of seven to 10 percent greeted me. Needless to say, I discovered “average” grade doesn’t always mean “steady” grade, and I discovered quickly why this Col rates as one of the most difficult climbs of the region.

Closer to the summit of 2000m and almost exhausted, I endured some short sections of knee-knackering grades over 10 percent. Bushed, but elated, I reached the summit and celebrated with a small glass of cold beer from the convenient café at the peak — one of the best beers I’ve ever savored as I sat and watched some sheep grazing on the high mountain pastures. I reflected on the panorama of the mountains, which, even through sweat-soaked eyes, had been nothing short of breathtaking and absolutely marvelous.

On the climb, I had seen small villages perched on the mountainside above, making me wonder how anyone traveled up to them — I obviously found out the hard way, periodically reaching them as I climbed! 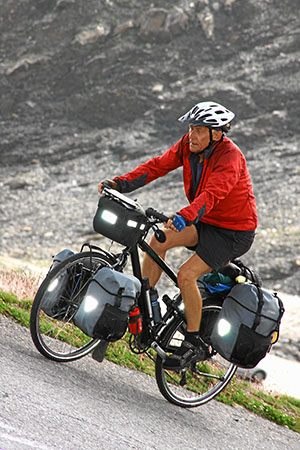 After that short interlude, I began the steep descent, when suddenly a menacing looking sheep dog decided to harass me right from the get-go! Barking and snarling, I thought he would force me over the edge of the roadway and down the embankment, but I managed to elude the beast and set off for the multitude of hairpin bends.

Now, the pro racers make it look easy, but they don’t have to contend with other traffic! At every blind bend, and there were many, it was a toss-up as to what kind of ascending vehicle would try to rub me into the mountainside. The absolute worst were the motorcyclists, who seemed hell bent on riding up the mountain at maximum warp speed. At each bend, their tires gripped the center line as they leaned over at such wicked angles, occupying half of my downhill lane. Moreover, my wheel rims grew hotter and hotter from braking and I worried about blowing a tire, making it exciting and tense hurtling down some sections at almost 70km/hr! Finally, after a 110km day, I made it to the village of La Chambre in one piece but very drained.

Well, after the previous day’s performance, the plan of riding two more of the higher cols in one day went out with the proverbial dishwater! I decided just to ride the Col du Telegraphe and leave the Grande Galibier for the next day. “Smart move,” the old body said!

From La Chambre, I enjoyed an easy ride to the start of the Col du Telegraphe, a 12km climb. I arrived at the summit in time for lunch, devoured at the handy café perched at 1566m. 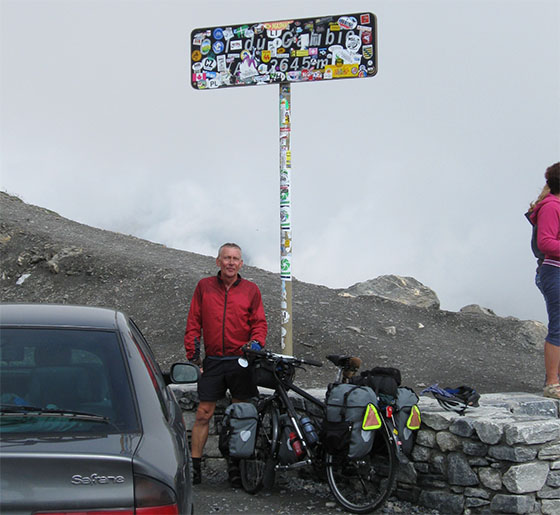 After another memorable descent, I arrived at the village of Valloire, a ski village in between the two Cols. I had only descended to about 1,400m, leaving me the hope of a head start for the next morning’s ride up the Galibier, the site of many battles between some of the Tour de France’s elite cyclists.

Cycling up to the summit of 2,645m was slow with a cold breeze blowing and surprisingly, quite busy with traffic — and hordes of crazy motorcyclists too. The steep grades varied, except for a 1.5km respite of a 2.5 per cent section at about the 5km mark. Otherwise, it seemed to be about seven to nine per cent all the way up.

About one kilometre from the top, there’s a tunnel for the vehicle traffic to escape the steepest part of the mountain, an 11 per cent grade and the scene of many attacks by the bike racers of the TDF. Of course, I had to haul my “tank” up there too, just to say I did it! At the summit, many surprised, recreational cyclists leaning on their lightweight velos, gaped at my heavy load, shaking their heads, but I did get a few good comments … “Quelle courage,” “Vous etes tres forts,” and “Silly old fool.” Not really!

Nonetheless, the fabulous scenery and riding above the tree line with passing clouds milling around thrilled me. The 45km ride down to Briancon was, well, beyond belief. I white-knuckled my way as I wound down the snaking road. Needless to say, a loaded touring bike handles like a slug when compared to a good road bike, and relentlessly, I had to keep my wits about me. The vistas (and my life!) flew by in a blur, barely allowing me time to realize how far down the mountainside I would plunge if I made a faux pas or experienced a tire failure. At some point, I remembered admiring the skills of the racers who manage to descend at incredible speeds, sometimes nearing 100km/hr.

As a footnote, I must mention that the professional cyclists of the Tour de France complete the above route as part of a one-day stage — amazing!