In 2003, an AASHTO task force formed to create a national corridor-level map that could be used to develop interstate bicycle routes. The corridors were eventually based on an inventory of what we knew about existing routes. Admittedly, we barely scratched the surface of all we needed to know. At the time, the task force wasn’t sure what we would call the network and we at Adventure Cycling certainly had some trepidation as to how the project might prove successful.

Today, after twelve years of nurturing the project, we are thrilled with the progress. With 23 states and over 11,000 miles designated, the U.S. Bicycle Route System is developing into a network that cyclists can ride.

Over the years, Adventure Cycling has gathered and generated resources to help volunteers, transportation officials, and bike and trail advocates develop and designate routes in their state. U.S. Bicycle Routes are officially recognized by AASHTO (American Association of State Highway and Transportation Officials), a national nonprofit made up of state departments of transportation (DOT) that has long been the go-to organization for transportation standards, policy, and designation of the state highway and interstate highway system. Read more about AASHTO on our FAQ for Planners page.

Our work is far from finished, but here are a few highlights of the things we are asked most frequently:

State DOTs are the entities that submit the routes, but usually, DOTs have a limited capacity to do this work. Luckily, DOTs see the value in working with nonprofits, volunteers, and local transportation officials (both city and county level) to get these routes developed and recognized. We help connect the DOTs to volunteers and nonprofit partners (usually the state bicycle advocacy organization) and then support them on a case-by-case basis. Sometimes, the nonprofit asks to help the DOT and sometimes we request nonprofits to take it on.

We use the National Corridor Map to determine the number and usually there is support for an existing corridor, but sometimes we add, shift, or change the National Corridor Plan to capitalize on an existing opportunity. For example, USBR 7 in Connecticut, Massachusetts, and Vermont was added to follow the Western New England Greenway, which has its own organization, plan, and supporters. (They even host a conference every year!) The USBR designation will enable this amazing multi-state route to become part of the national system so travelers from all over the world can find it on our Maps and Route Resources page and on the Open Cycle Map.

3. Are there bicycle facilities?

Several states and local agencies place signs along their U.S. Bicycle Routes, these include Maine, Michigan, Kentucky, Ohio, Tennessee, Missouri, Virginia, and Washington (more on our Maps and Route Resources page). As for the route itself, sometimes, the route follows trails and streets with bike lanes or roads with shoulders and sometimes roads are chosen with low traffic but little shoulder. It is extremely difficult to connect routes across several states with consistent bicycle infrastructure.

On a very positive note, transportation authorities are adding bicycle facilities to designated routes. For example, in Ohio, a trail is being built to accommodate cyclists on USBR 50 and Virginia has adapted sections of USBR 1 to roads that provide better bicycle accommodations and less traffic. In Michigan, they provide an overview map that shows you the route by facility type. We provide sample criteria and things to consider when choosing routes for the USBRS on our Implementation Resources page.

4. Who designates the route?

Once the route is drafted and the roads and trails are mapped out, each agency that has jurisdictional control over the route agrees to the designation. This can take many forms — a resolution or memo or even an email confirming they are on board. The DOT decides what it needs for this step and once all the agreements are in place, the route can be mapped in final version, a route log created, and the application is pretty much ready to be submitted. The final step is a signature from the DOT secretary or executive.

5. When are routes designated?

Two times per year, AASHTO has a call for applications and a committee reviews them. The committee doesn’t determine if the route is suitable for bicycling, but they do review the agreements and the designation number. These meetings are held two times per year in conjunction with AASHTO’s spring and fall meetings. Once the routes are approved, Adventure Cycling works with the states to publicize the designation. We also put the maps, when available, on our website and provide the information to the Open Street Map contributors for adding the routes to the Open Cycle Map.

You can find all this information in detail on the U.S. Bicycle Route System webpages. We continue to develop more resources to establish more routes and, most importantly, help cyclists explore these routes. If you are interested in getting involved in developing U.S. Bicycle Routes in your state, contact us at usbrsinfo@adventurecycling.org. 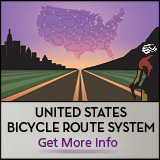 would love to learn more , about where to find the trail systems and where they lead to and from my point of 815 n sheridan rd stanton mi 48888