With the increasing number of Cyclists Only Lodging and Camping listings on our maps, we got to wondering how one of the first of these facilities was doing: the Community Center in Monroeville, Indiana.

Through Twitter, I was able to connect with some cyclists who had stayed there recently. This is what they had to say about their experiences:

Bike the US for MS group: 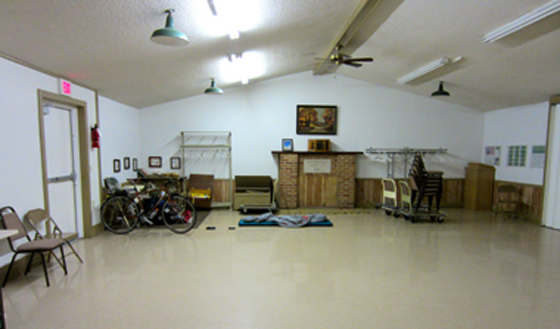 Warren and the Monroeville Community Center are still very excited to host cyclists. They provide the air-conditioned community center for however many cyclists can fit ... and it's big! Multiple toilets, a shower, free washer and dryer, all soaps, detergent, dryer sheets, towels are there and free for use. There is also a cart with a TV, digital receiver (so you can get select stations), a DVD and VHS player with a random (yet old) selection of movies. There are heaps of Adventure Cycling magazines, a map and book swap, as well as all the Adventure Cycling maps that go through Monroeville, framed on the wall for easy viewing and use. A local library card for cyclists, as well as a movie card for use at the local Marathon store, are there, too. There is a log book which has been kept for decades and donations are not asked for, but everyone seems to leave one. There is even a key Warren gives you to the shelter, so you can lock up bikes/bags/etc. while you are gone. Many other cyclists in the log book wrote about whenever there was a social event taking place at the shelter, the cyclists were always included and invited to join. 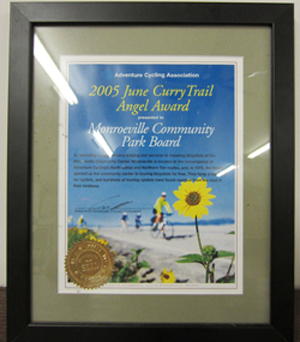 Warren has framed their 2005 Trail Angel award from Adventure Cycling and it's featured front and center over the mantle of the shelter. He went out of his way to show it to me and how proud he is STILL that we (cyclists) voted for Monroeville that year. He's definitely getting up in age, but absolutely loves doing this -- I'll definitely be sending him a post card when I reach the Pacific ... and he'll most likely post it on one of the bulletin boards in the shelter with all the others.

My group of seven stayed there. One of the best facilities on NoTier.

How's that for glowing reports? Puts a smile on my face and makes me want to ride the Northern Tier or North Lakes route just to meet Warren and stay at the Community Center in Monroeville.

[Just a note: Every year you may nominate a person or organization for June Curry Trail Angel, Pacesetter Bicycle Travel, and Braxton Bike Shop awards. Nominations open July 1 and must be received by September 30.]

Photo 1: Room in Monroeville Community Center where cyclists are invited to stay overnight.