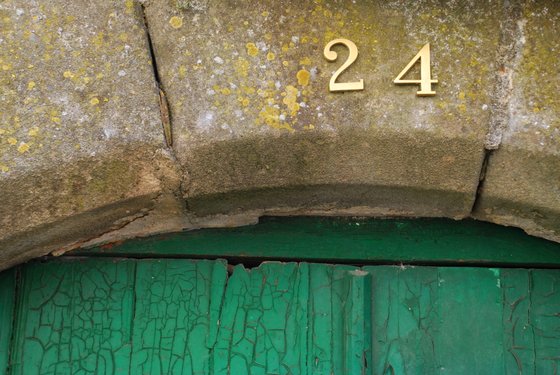 When traveling through a country there is so much to take in -- sights, sounds, culture, language. It can be overwhelming.

Sometimes I choose certain specific things to focus on as I'm pedaling. Trees or birds, or the hats people are wearing. The signs on the side of the road. Or I'll pick a color. It is amazing how your perspective changes if you focus on the color red, and later on the color blue. What your eye takes in doesn't change, but how your brain processes it does.

While we were pedaling in Portugal, I started noticing house numbers. In the small villages, most weren't generic, but often obviously fashioned by the home owner. I began taking photos of them. Then I got obsessed. I started collecting house numbers like you would try to fill out a bingo card. Could I find and photograph all the numbers from 1 to 100?

This was rather entertaining for me, and rather annoying for my partner, Kat, who constantly had to stop and wait as I dismounted my bike to search for the perfect angle to photograph a house number I hadn't captured yet.

I didn't make it to my goal of 100. Somewhere along the way my obsession began to annoy even me. My vision was so zeroed in on house numbers that I was literally missing the big picture.

The video is a shortened version of my countdown to Portugal ... as entertaining or annoying as it may be.

Countdown to Portugal from Willie Weir on Vimeo.