The following is a guest post by Champe Burnley, board member of the Virginia Bicycle Federation. 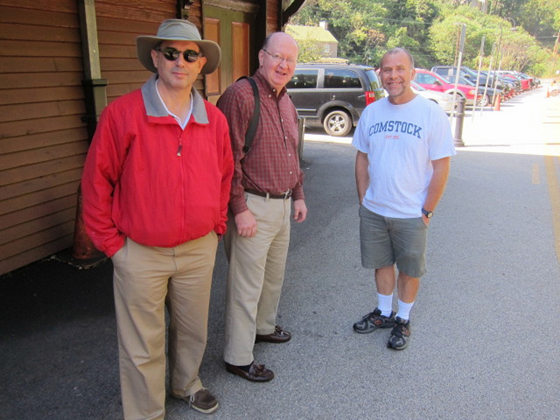 On Tuesday, October 15, I, along with Linda Boxx of the Allegheny Trail Alliance, and two other Virginia Bicycling Federation board members, participated in a test of roll-on bike service on Amtrak's Capitol Limited Line. 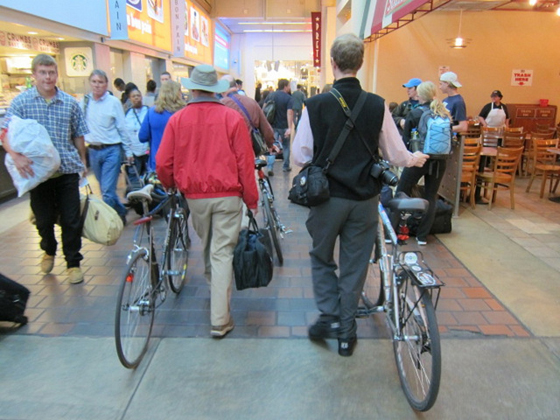 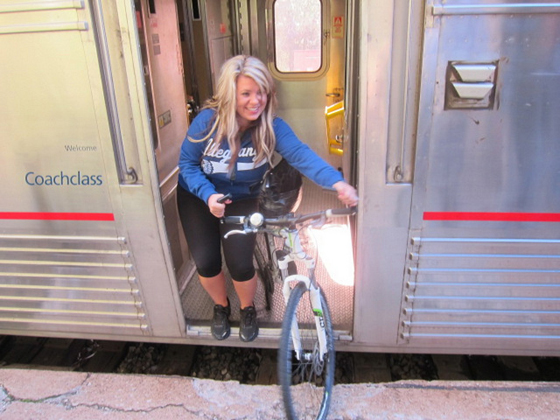 Exciting the train with bicycles

We boarded the train at Harper's Ferry and rode to Washington's Union Station. I must tell you, loading my bike on the train was easier than putting it on my car-top rack. 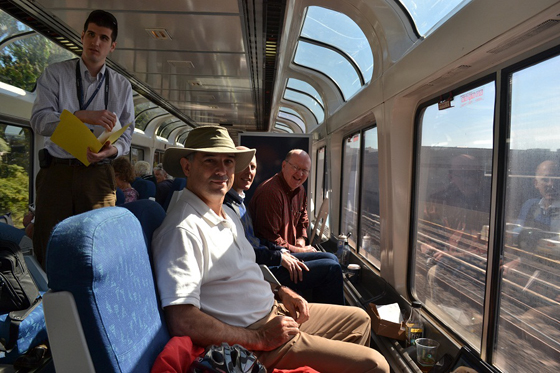 Everyone seemed pleased with how smoothly the test went. It didn't appear to add any dwell time to the train. 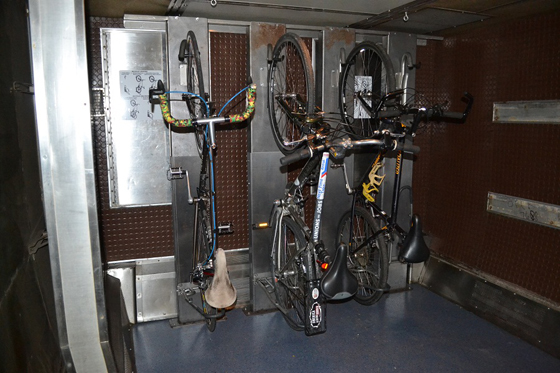 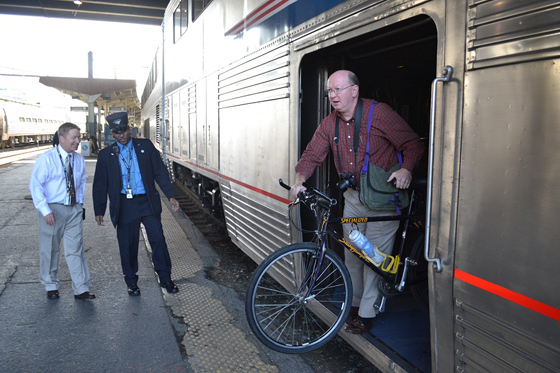 Arriving in Washington later that afternoon, the bikes were easily rolled off the train cars.

All cyclists participating in the test were positive in their feedback and Amtrak officials seemed pleased as well. It was a good opportunity to work with Amtrak, as well as get to know Malcolm Kenton from the National  Association of Rail Passengers. We all hope to see roll-on service on the Capitol Limited as well as other U.S. train corridors in the near future.

Thanh, thanks for sharing the information. Many of us don't regularly check the Amtrak web site, so if any updates become available share with those of us subscribed to this discussion.

I contacted Amtrak by email and got this response yesterday, May 26, 2015:

"Thank you for contacting us.

We apologize for the delay in responding to your email correspondence. We have received an unusually high number of email requests. Your patience is appreciated.

Regrettably, a start date for 'roll-on' bike service on the Capitol Limited train route has not yet be established. Once the 'roll-on' bike baggage cars are in service, information will be posted on the Amtrak.com web site.

We hope this information is useful.

I rode the C&O and WMT in May. I would ride it more if Amtrak would begin this service. Any word as to what the hold up is? Amtrak has a Trails & Rails program but we can't access the trail from the rail. Duh? What the heck is Jeff Markus smoking?

I would love to see Amtrak and the bicycle coalition get this off the ground. Are there any updates?

As an Adventure Cyclist member and supporter living in Martinsburg WV I look forward to this service.

The major hurdle for any improvement in Amtrak service or expansion of any convenienc is the desire to break the back of a Unionized workforce. After the Post Office the ril union represents a nationwide federal force for union labor. These forces has been in the crosshairs of union busters for many years and if a service represents a ridership building aspect then anti-Labor forces will battle to defeat this service to undermine the Amtrak's ability to continue to employ a union workforce.

Talk to your elected officials and you will find Republican and Libertarian backlash against the federal government fulfilling the needs of the American People if it means strengthening the protection and positive efforts of a stronger union workforce.

Sadly we are all the losers in this kind of battle and it is only by bringing public opinion and the ballot box to bear that gains can be made to improving the Federal Unionized services like Amtrak, USPS and fulfilling the needs of our country.

Looks like the test was successful, any update as to when it will be available as part of the regular service on the Capitol Limited Line?

Hi Andrew, Amtrak is working with us to convene a Bicycle Task Force to work on a pilot project for roll-on service. One of the options is to make the Capitol Limited the pilot project, meaning roll-on service would be allowed for an extended period of time. We would analyze and document the challenges and successes in order allow expanded service on other lines. We are conveying the task force at the end of the month and hope to have the pilot project identified and started soon after that. Stay tuned, we'll provide periodic updates via this blog.

I used regularly to use a version of the bike-hanging arrangement that you show on trains in the UK, when I lived there. On Virgin Trains' Super Voyager trains to north-west England, the apparatus was actually a little simpler. There were fold-down hooks in the ceiling of a vestibule at the end of one car and grooved attachments on the wall for the rear wheel.

Trains in the UK are smaller than those in the US (the bridges are lower and the tunnels are narrower) so there's less space on each train. I consequently can't see any reason why Amtrak couldn't put hooks in the luggage areas of many trains, including those without checked baggage facilities. There isn't, as far as I can see, any good reason why there couldn't be hooks above the baggage areas in some cars on the north-east regional service.

The spirit, however, seems to be that bikes are too complicated and nothing can be done.

Most of Amtrak doesn't have carry-on service for bicycles, and the major hurdle is finding stations that do handle checked luggage.

Putting the bike in a box isn't too bad but there are so few stations that will accept checked luggage you have a hard time planning a trip. I wanted to go to Louisiana once, and had to go to Longview TX just to get close!

I was so glad when I heard Amtrak transported bikes from Longview Texas then dismayed when I found out I couldn't bring it back from Grand Rapids Michigan. No luggage service there.

I love this idea. I could have used this service 3 times now... I'd point out that there could be at least 4 more bikes racked in that same amount of space, alternating front wheel up, rear wheel up.

Hoooorayyyyy!!!! When I attempted to get me and my bike to NYC for the start of Climate Ride I was informed that I absolutely could NOT under any circumstances take my bike on the train from Rutland. To make matters worse, I found the treatment I received from the conductors was as if I were a criminal or a hoodlum. I hope Amtrak gets it's act together for the other train lines.

Want a great ride? Take this train to Pittsburgh, and then ride to Washington DC.

Unfortunately, this wasn't available in 2010 went I went on this ride. Maybe I'll do it again.

It's about time. I could never understand why Amtrak did not see this as an obvious passenger attraction. Cyclists are also train supporters. And the Pittsburgh-DC cycle route is potentially the most popular and visible in the nation. The biggest barrier to the cycle route has been getting back home and Amtrak is the obvious solution since it parallels the route most of the way. This needs to be promoted heavily.