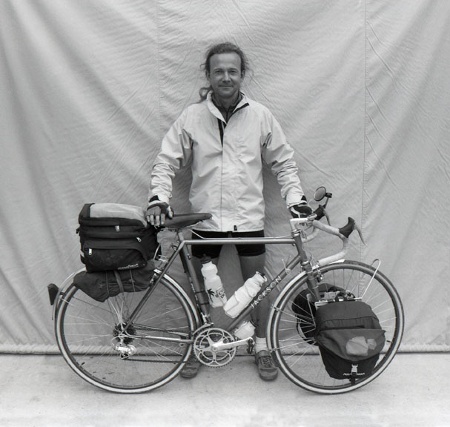 Gordon Howe was a seasoned bicycle tourist when he came our way in the summer of 1995 on his Bob Jackson. He worked as a post-production editor at BBC Television, his employer for the previous 16 years. In 1990, he had ridden from New York City to Oregon by way of Los Angeles. In 1992, he rode from New York City to Montreal, Canada, He also toured extensively around the United Kingdom (his home), France, the Netherlands and Belgium. In 1995, he was riding from Calgary, Canada, to Denver, Colorado.

When recalling his tour he wrote, “It would be difficult to single out a high point – simply being there and doing it was enough, but near the top of the list would be: the tremendous scenery of the Icefields Parkway; freewheeling with a tail wind at about 50mph on a smooth, wide, empty road down to Ennis, Montana; encountering various wildlife along the roadside, including four black bears, unseen by motorists; enjoying a round of applause from a coach-load of people at the summit of the Dallas Divide; exploring Mesa Verde National Park; and encountering crowds of other cyclists on the cycle paths between Dillon and Breckenridge, Colorado.”