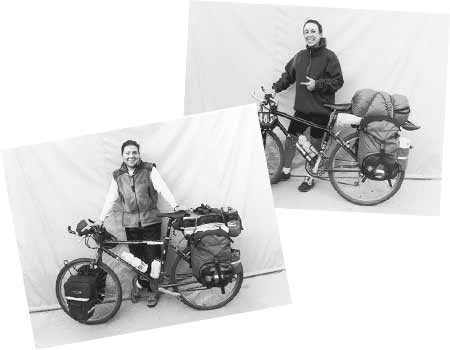 In the summer of 1996, two 26-year-old women, Piera Damonte and Lia Farley, from Berkeley and San Francisco, respectively, and both a bit cynical, took off from Eugene, Oregon, headed for Savannah, Georgia, and the summer Olympics in Atlanta. They rode the TransAmerica Trail most of the way.

Writing to us from a laundromat back home after having been "resubmerged" in her old life as a research biologist, Piera admitted to becoming all "mushy-gushy" about her tour.

"I was a young woman who took off with her buddy and her bike in search of the cliche stuff: the ultimate adventure, herself, and a sense of accomplishment," wrote Piera. "Instead I discovered my own country - a beautiful and often empty land filled with gentle and courteous people. I guess I'm here to say that America is not hopelessly polluted, grossly overpopulated, nor filled with lunatics and criminals. But this is what most people seem to think - truly a shame."

Piera goes on to admit feeling downright patriotic in the wake of her trip - a new experience for this Berkeley kid. She also expressed some other sentiments we can probably all relate to.

"I wish I had my loaded bike with me now."

Lia Farley, Piera's cohort in patriotic awakenings, describes their trip together as a "violent bout of escapism turned productive." (Wow, that is perhaps the best description of a bike tour we've ever seen.) Lia, who works as a landscape architect in San Francisco, described herself as an avid mountain biker, whose only previous tour was a "sunny skip" from Frisco to Santa Cruz and back.

It was a wonderful trip, but did little to prepare her for the hail, snowstorms and endless rain the duo encountered in the first month of their cross-country ride. Of course, those experiences with the weather left Lia undaunted. And they provided another benefit - helpful mental imagery for enduring those "sufferingly hot" states east of the Mississippi.

"The highlights of our trip are overwhelming," wrote Lia. "Two emergency storm rescues, one near bison goring, a pair of clean socks, massive Pop Tart and Fig Newton consumption (highest calculated calories per dollar) and on and on.

"We capped off our trip with an obvious highlight in Atlanta watching the Olympics and no, we were not in them (#1 Dumb Question asked with frightening consistency all the way across)."

What would any bike tour be without a #1 Dumb Question?