November 23, 2017 - Kim Andresen is an avid traveler and adventure seeker. She kindly submitted this post to the Adventure Cycling guest blog. 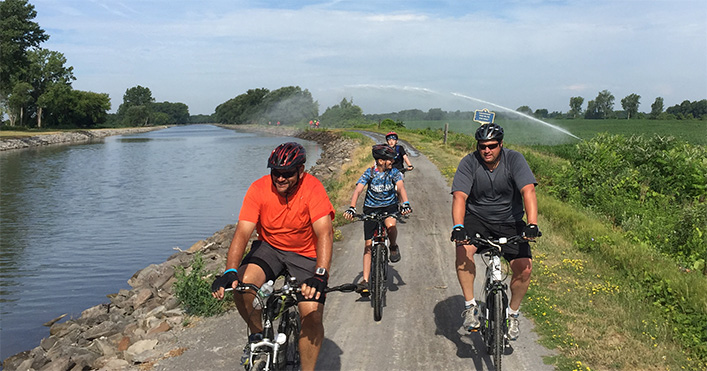 Here’s the thing: I’m impulsive. So, when my partner, Greg, presented the idea of cycling the Erie Canal, I agreed without hesitation. Of course, I had never pedaled more than 20 miles at one time, and that was perhaps two or three times over the course of many, many years.

Was I prepared for a 400-mile cycling expedition? No, no, and no.

Would I do it again? In a heartbeat. I actually can’t wait to try it again — of course, this time I’ll have a bit of an idea what I’m signing up for. What’s that they say about hindsight?

Let me take a moment to set the stage: Parks and Trails New York’s Cycle the Erie Canal is an annual fully supported summer bike tour that crosses western and central New York, following the historic Erie Canal route from Buffalo to Albany. The towns along the route are welcoming, often hosting special events and tours as the ride makes it way through their region. Each night was spent camping in a designated location whether that was a field at a historic site or a college campus.

Greg and I were joined by his brothers David and Dan, and Dan’s teenagers Chris, Rosalind, and Rebecca. Not wanting to miss out on the adventure, Greg’s folks, Bob and Nancy acted as our personal support team driving an RV from stop to stop, as they did their own version of the tour.

It was an absolutely memorable and eye-opening experience, and one that taught me several valuable cycling lessons — and debunked several preconceived notions I had about long-distance recreational riding.

If only I had known…

So, to help out all you fellow newbies, here are the top three things I learned on my first long-distance cycling tour. And for all you experienced riders, go ahead and laugh. I know I can certainly look back and shake my head. 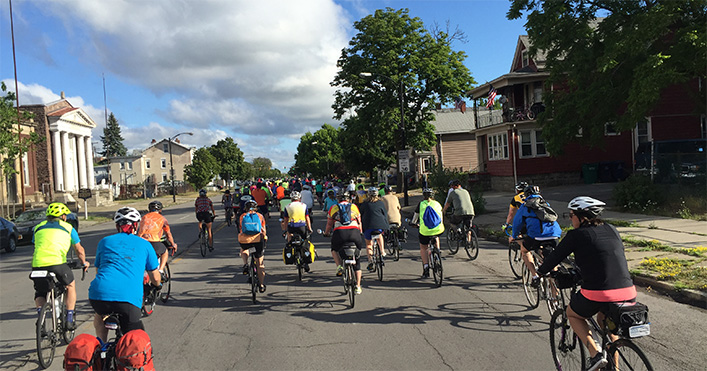 Preconceived notion: My 10-year-old bike would never make it on this trip. Therefore, I needed to purchase a new bike complete with narrower road tires and more gears than I’m used to.

Reality: There were bikes of all makes and models on this tour.

I probably should have done a bit of route research. I assumed we would be on paved bike paths and backroads for the bulk of the ride. It never occurred to me that we would be riding on dirt paths for a good chunk of the tour. In reality, my trusty old steed probably would have been just fine.

Side note: Make sure your new bike arrives more than three days before the tour starts. I was only able to get about 12 miles on the tires before hitting the tour. Needless to say, about 50 miles into the trip this untested bike started to fall apart. Literally. From losing a pedal to my gears going out of whack, I lost a good many hours getting fixed up at a local bike shop. Thank goodness for small towns with awesome, hospitable mom-and-pop businesses!

Lesson: Do your route research. A new bike doesn’t mean a better ride! 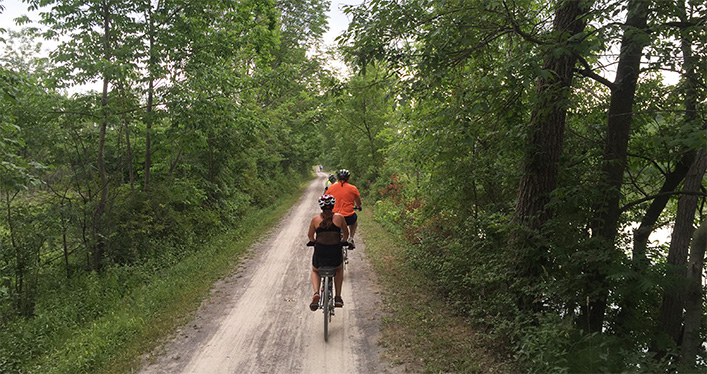 Preconceived notion: It’s a fully supported recreational tour so I’ll be riding the same speed and stopping at the same places as everyone else.

I had an idea that we would all be going in one large group from spot to spot — as you would on a walking tour. And I had fears that I would be the slowest rider ... y’know holding up the group as I slowly huffed and puffed my way through the day’s last miles.

Reality: While it was great to make new friends, there was plenty of time to explore on our own.

Hundreds of riders started out as one large group on the first day, but the packs clearly started to separate as everyone found their own rhythm. There was plenty of time to explore the small towns we passed through — if you wanted to — or you could simply ride on to that night’s camping spot, kick back, and relax for a few hours.

Lesson: Basically our group tour was similar to the choose-your-own-adventure books from my childhood. We all started and ended on the same page, but the journey to get there varied wildly from rider to rider.

Next time around, I would definitely research all of the little towns along the route. While we managed to catch quite a few fun events and stop at a few historic sites, I know we missed quite a few attractions — guess we’ll catch them next time around!

Preconceived notion: Okay, so I’ll admit one of the reasons I was so psyched to do an eight-day cycling tour was the idea that I’d tone up the mom bod. C’mon, can you think of a faster way to kickstart a diet? I absolutely had grand expectations of losing five to 10 pounds.

In my limited bit of pre-tour research, I’d read that you would be burning a LOT more calories than normal, which was absolutely true. I mean we were pedaling 40 to 60 miles per day.

Reality: Not only did I not lose weight — I gained a couple of pounds!

So, here’s the deal — I’ve only done this one fully supported tour, but it was basically a traveling buffet. Seriously. There was more food than I ever imagined. And with the idea that I needed extra fuel while pedaling, it was basically carte blanche to indulge in peanut butter bananas, granola bars, and shortbread cookies.

Lesson: Drink plenty of water, yes. But there’s no need to sample every snack at every rest stop. Trust me, your waist will thank you.

Of course, there were plenty of additional lessons along the way — from trying pickle juice shooters to learning about the healing power of monkey butt. But … that’s another story altogether.

Kim Andresen is an avid traveler and adventure seeker, but an admitted newbie to long-distance cycling. She is a recent transplant to the faux-upstate New York — aka the Hudson Valley — from the real upstate New York’s Adirondack Mountains. When not out exploring with her son, Oliver, and partner, Greg, she spends her time as the senior content developer and grant writer for the Adirondack-based Regional Office of Sustainable Tourism.

Thanks for the info.