The Old Grey Mare On The TransAmerica Trail 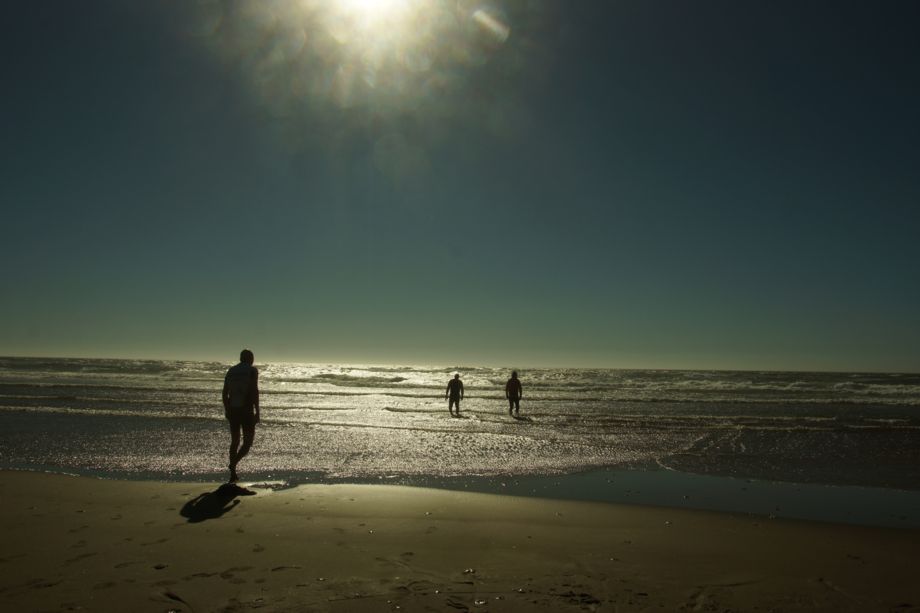 Our 2015 TransAmerica Trail tour was over. Standing on this Oregon beach, my fellow rider Bob Purdon said, “John, you’re going swimming.” I am a cold water wuss and this Pacific water is distinctly unwarm, the waves gray-cold. Bob had played football, while I often wore six layers of cycle clothing. Who cared? Our wheels had bridged the world’s two great oceans, and we celebrated cycling 4,200 miles in 83 days with a cold plunge.

Cycling with the United Kingdom’s Cyclists’ Touring Club (CTC), I met Bob Mcloed, who had ridden the TransAm sixteen years previously. Twice a week I cycled a hundred miles with the CTC and with every ride came training and advice. The principal lessons were: ensure the bike is comfortable and robust; and nutrition is more important than fitness. 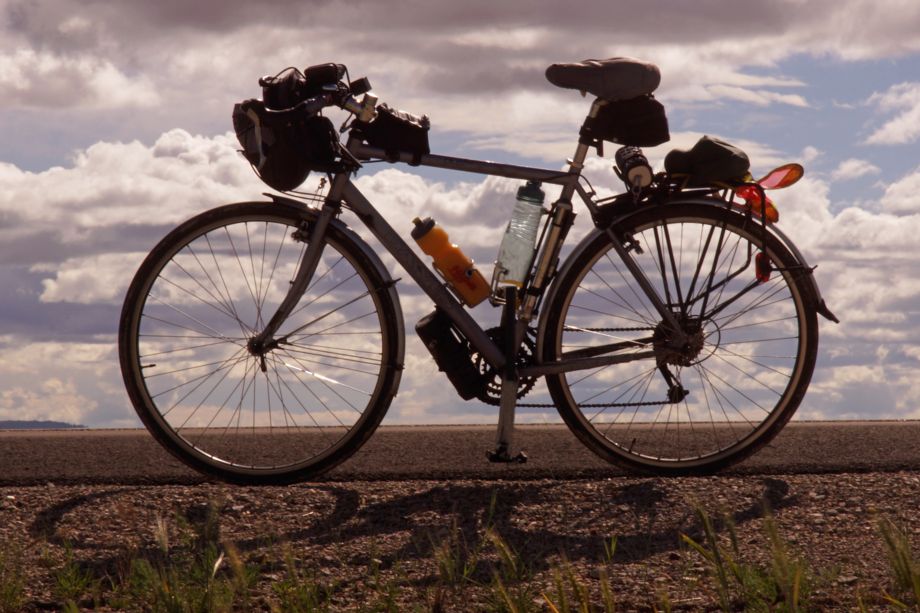 Upon my arrival in the U.S., my sister drove me from her Philadelphia home, through Maryland, past War of 1812 number plates, to Williamsburg, the “Revolutionary City,” where we posed for photos outside the restored Wetherburn’s Tavern and colonial-clad town criers challenged patriots to fight the British. One Brit-bashing patriot would wreck my ride. At the TransAm’s start, Mitch and Whitney, our ride leaders, were fixing a bike. Their smiles and waves evaporated my Brit-bashing fears. Mitch named my bike the Old Grey Mare. 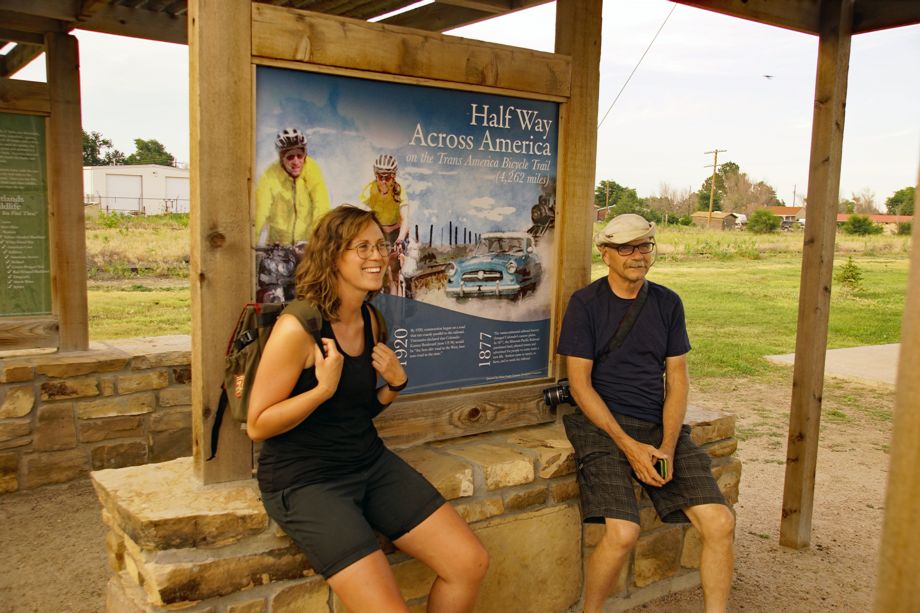 With whom would I ride? Shirley and Dave, and Geoff and Diane were married. Mike and Niles were friends from Alaska. That left Tom, Bob, and myself. I decided to wait. Imposing yourself courts disaster. Tom showed massive mental strength to pedal his slow recumbent solo to the Pacific, where he joined an elite, who had hiked the John Muir and Appalachian Trails, and ridden the TransAm. The four other guys cycled together. I named us the Hobbits, which I doubt they appreciated, but our journey seemed endless and we ate second breakfast everyday. 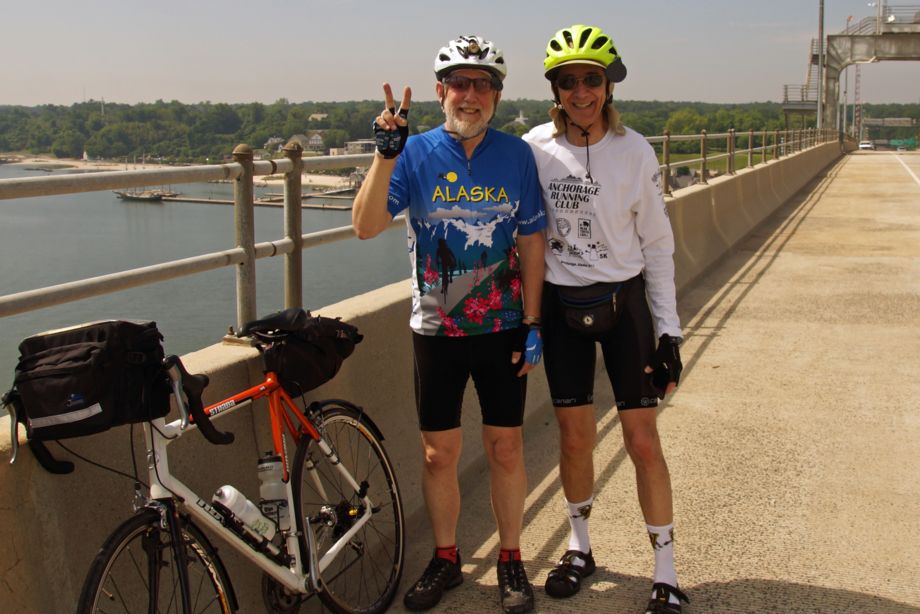 Riding sixty miles each day on the U.S.’s sensibly sloped roads with three great guys determined to party their way to the Pacific was neither mentally nor physically taxing. I focused on a day at a time, turned the pedals, and enjoyed their company. We climbed everything: the Appalachians, the Rockies, the Bitterroots, the Cascades, hay bales, plastic dinosaurs, bronze bulls, a jackalope, oversized wagons, steam tractors ... We rode into cowboy towns, lashed our steeds to horse posts, and pushed open cafe doors. We grabbed every opportunity to muck around in appropriate, and a few inappropriate, ways. In Colorado, Niles said, “There is nothing I would prefer to be doing.” All of me agreed. 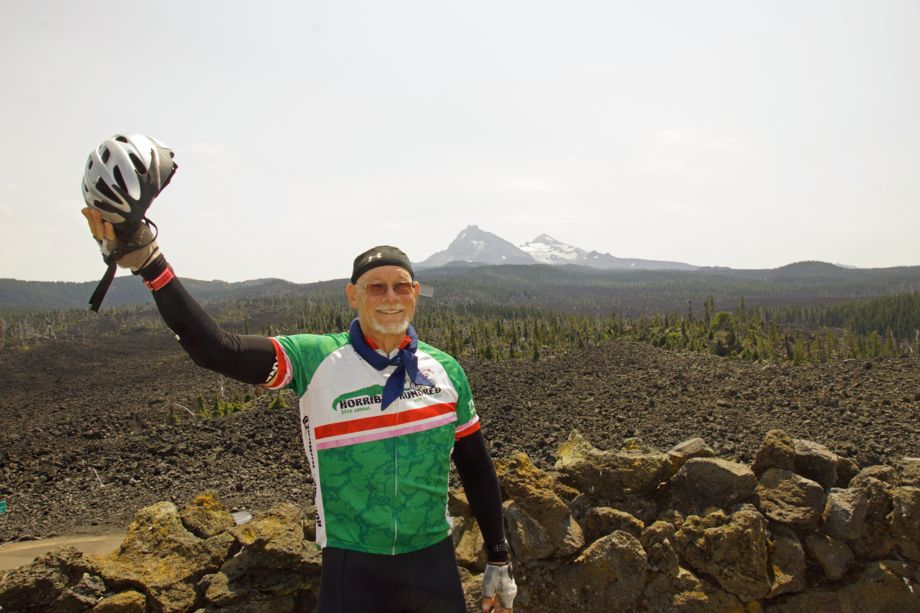 On the Yorktown beach which gave birth to a new nation, a new TransAm was born. Westward, we followed the European migration across the geography and history of the U.S. After the colonial period at Yorktown, Williamsburg, and Jamestown, we reached the Civil War battlefields around Richmond, then continued to Monticello, where Jefferson penned the Declaration of Independence. We dawgie-dodged Kentucky farms and crossed the Ohio on an amazing ferry to reach the Mississippi at Chester Illinois. Lewis and Clark had camped on the opposite bank. Our two westward journeys were intertwined. 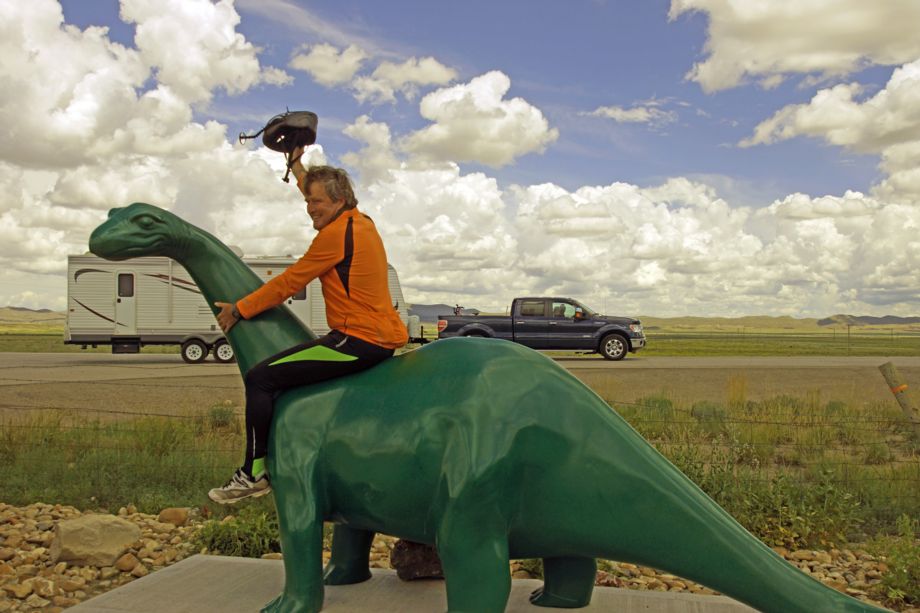 Everyone knows the Midwest is flat and boring. When I meet everyone, I will tell them they are wrong. Every day offered something wonderful. Every morning I fell in love with Kansas — the birdsong and green fields. In the afternoons, in 100-degree heat and 40 mph winds, I divorced her. In Colorado, we approached the Rockies through sunflower fields to ride the summit of Hoosier Pass. Jackson Lake’s dawn over the Grand Tetons was stunning. 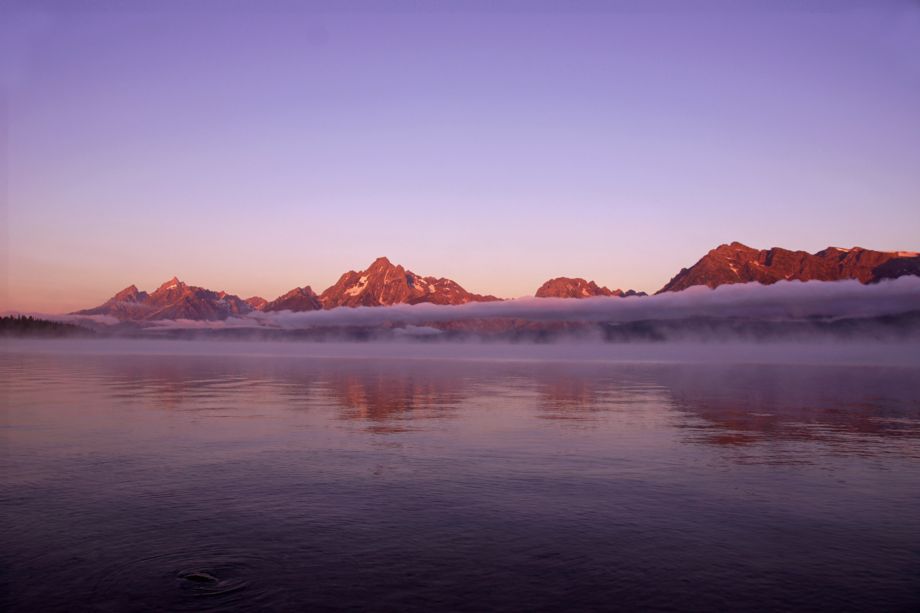 Our daily routine became: break camp, cross the next mountain range, and recamp. Car journeys are about stops between destinations. Bike rides are about the journey. The land, wind, sun, and rain shape the ride. To appreciate the huge skies and scenery of the West, like the Native Americans, whose history was woven into every day, you must feel the country. Sacagawea guided Lewis and Clark over Lolo Pass and across the Bitterroot Mountains. We pedaled in her moccasin steps. Beside the Powder River – a ribbon of green through a dry land, I recited Walter de la Mare’s poem, “Napoleon.”

What is the world, O soldiers?
It is I:
I, this incessant snow,
This northern sky;
Soldiers, this solitude
Through which we go
Is I.

We pedaled past pioneer wagon ruts in the prairies. With each stroke, the land, the sky, and I became one, and the TransAm a voyage into my soul. We climbed from Sisters in Oregon through pine forests. The trees parted into a lava field ringed by snow capped volcanoes. Then we dropped 4,000 feet from McKenzie Pass. Beside the Siuslaw River, I stretched along my bike and cranked up the speed, thinking of the end of all things, the beginning of all things and my wife Elizabeth whispered, “C’mon Old Grey Mare, you can do it.” We reached the Pacific shore. The group parted and there was Elizabeth, whom I have loved for half my life. The epic quest had reached the center of my heart. A journey across a continent had become a voyage through my soul. Leave only footprints and take only memories — what nonsense. I took home far more than memories. 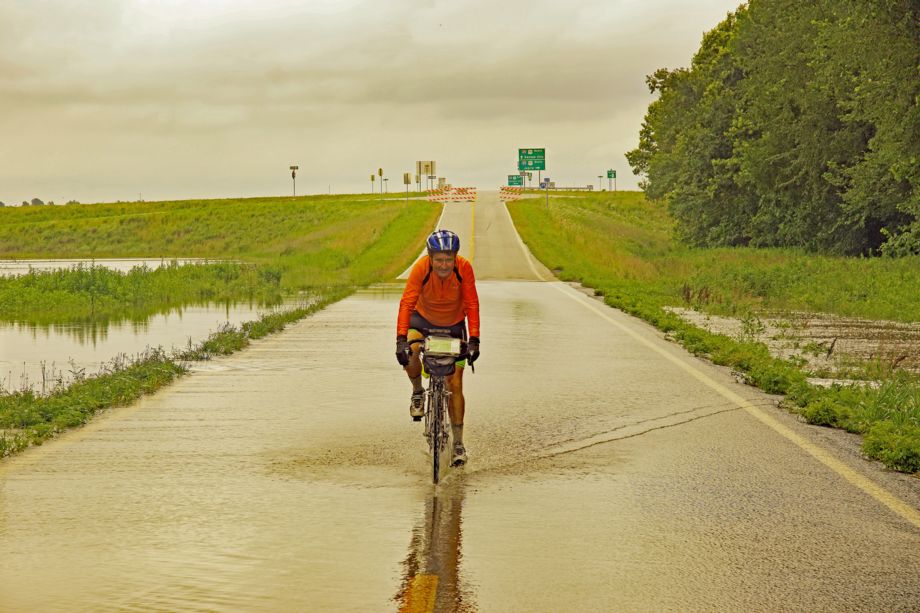 The Old Grey Mare is thrilled that she did not put a wheel wrong — not even a puncture. She holds her handlebars up high and looks with a serene smile at the carbon fiber yearlings in her stable. “I was at Yorktown. I have tamed the dawgies. I have crossed the prairies. I have climbed the Rockies. I have completed the Great Hobbit Quest. I have the one wheel that binds the two oceans. Go and frisk in the Surrey Hills while I dream of Monticello, the Ohio River, moose, sage brush, and wagon trains.” 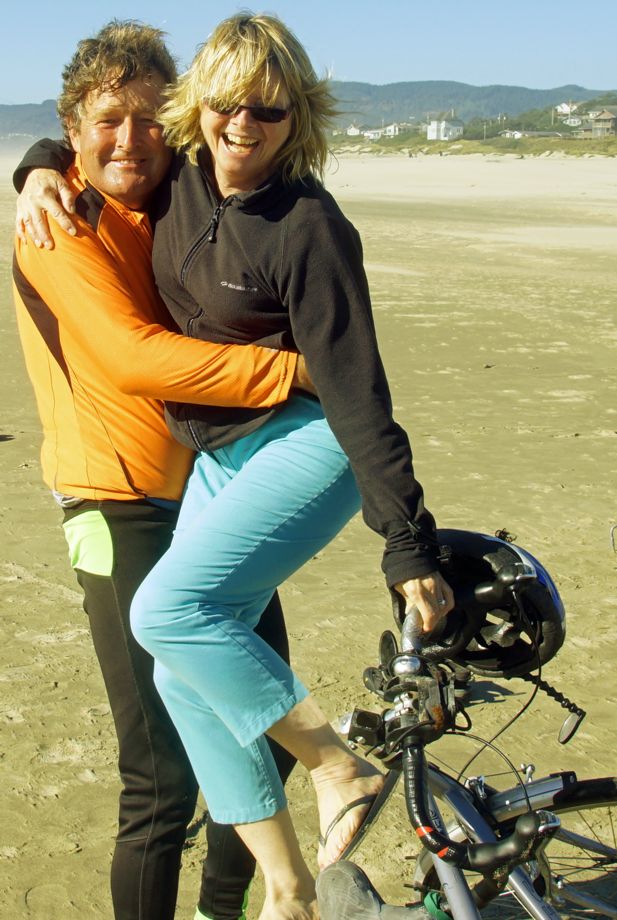 If you think you might be itching to get out on an epic journey of your own, check out one of a dozen self-contained and van-supported tours this season.

I would agree that, on a clear sunny morning, the Tetons of Wyoming are awe-inspiring. The ride from Jenny Lake to Jackson Lake Lodge was spectacular. Then the breakfast at the Lodge...!

curious how long the entire trip took. I've been considering a similar endeavor and wonder how much time to allot.

good memories i ride between washington and astoria in 33 days in 2008, it was the trip of my life

Being one of the four Hobbitses, I really enjoyed every second breakfast, and each day of cycling. Ok. the hot ones in Kansas and in eastern Oregon were tough for this Alaskan. Although some details now begin to fade, each day a different image crosses my mind and I smile inwardly. Great memories of great times. I'm looking forward to cycling in Alaska with you.

Thanks for sharing John. We did our Transam this summer and felt some of the same feelings as you. Although my words are not quiet as smooth as yours. Many of times I felt "There is nothing I would prefer to be doing."... My catch phrase was "Everyday is Saturday".. because the day of the week did not matter.. Only the journey mattered.