The Kindle for Maps?

Friedel Grant's guest post last week - The Kindle: Perfect for Bike Touring - generated some good conversation about using the Amazon device as a way to bring books to read while on tour. In addition to its intended purpose of reading, it was also suggested as a way to view maps. A commenter recommended the resource eReaderMap.com.

eReaderMap.com is a map browser optimized for eReader devices including the Kindle platform. You can view a street map of a city as well as get directions for travel between two addresses. There is a search function allowing you to look for specific kinds of businesses. It appears to be a handy tool for someone on the road, especially if they didn't bring a GPS unit or were out of cell phone coverage, rendering smartphones useless. All you need is a wi-fi connection. 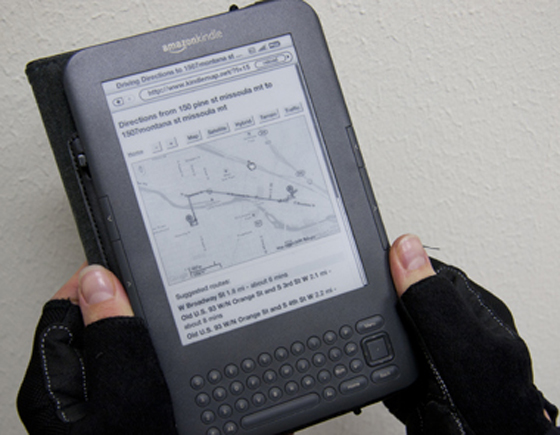 An example of using the 'get directions' function of eReaderMap.com

What about the Kindle as a navigation device? As a result of the comments from my post on Mobile Maps in our Future, it seemed clear that traveling cyclists weren't terribly interested in using a Kindle for that purpose. However, a Kindle can read pdf files and, as such, any of our downloadable maps could be viewed. To test this scenario, I asked a Kindle user to load up the Green Mountains Loop on his to see what he thought. 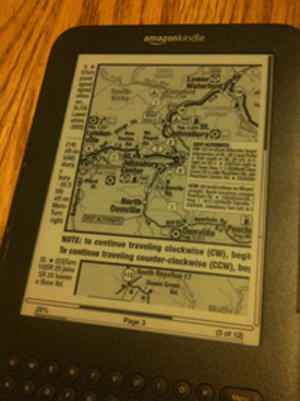 The photo above shows the map at 100 percent. It would have to be scaled down in order to fit an entire map panel and its narrative on the screen. This is not really a viable solution at this time, as the type gets too small. We would have to reformat our pdf files to make them more legibly viewable on the Kindle screen. Also, the map would have no locationally aware features, making it no more useful than the paper map in that regard.

All that being said, we are going to keep an eye on this tool and see what develops down the road. Who knows? Maybe one day you will navigate the TransAmerica Trail on your Kindle.

A new, just launched site, called http://www.anysubjects.com will tell you where to find all the free Amazon Kindle books you want.

If you look in the reference and technology sections, you can check out the available mapping sites. Bing does a nice one for Kindle.

It will also tell you where to find hundreds of more websites perfect for looking at with the Kindle browser. Just think - never again needing to change the font size or the screen settings! You will love it.