The Future or the Past of Public Transportation? 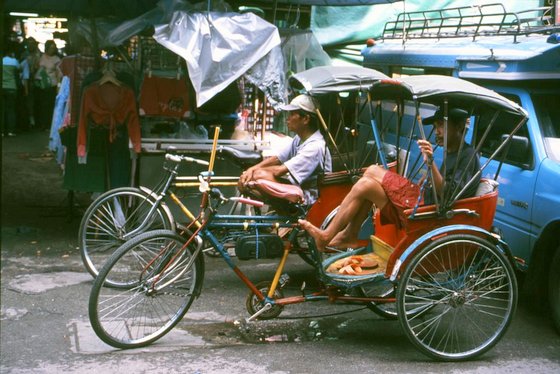 Pedicabs, bicitaxis, rickshaws. Call them what you will, but they make up a vibrant force of local transportation all around the world. I've always enjoyed traveling in countries that had human-powered transportation. It was very "foreign". But pedicabs are becoming more popular in U.S. cities, while at the same time they are in decline in many countries around the world. The decline was apparent in Thailand, where we often saw scenes like the one above. Bicycle cab owners sitting idle on the side of city streets. Scooters and motorcycles can now be licensed to carry paying customers and are now by far the more popular way to get around.

In many cities north of Bangkok it was impossible to use the sidewalks for their intended purpose. They were completely filled with parked scooters. One teacher that I spoke with told me that at his school five students had been killed in scooter accidents in the prior six months. 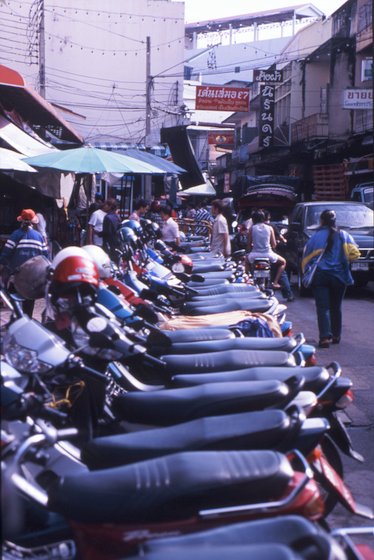 It is ironic that the U.S. is seeing a resurgence in the bicycle as a transportation vehicle, while in China, India, Thailand, and many other countries the bicycle is being increasingly abandoned for the ever more popular scooter.

I am in Manila and there are plenty of interesting pedicabs and small motor cycles with sidecars here in the Capital City of the Philippines. Metro Manila has about 10 million folks (suspect that is official guesstimate) and really more like 12+M and there is such a small infrastructure of public transit except for diesel fume spewing buses and gasoline fueled jeep jitneys. Manila has (had?) a small passenger rail system but has been largely abandoned in favor of motor vehicles and SMOG! The only real transit infrastructure here is asphalt and noisy motor vehicles. What an idea place for electric light rail and regional rail systems.