The Freedom to Camp 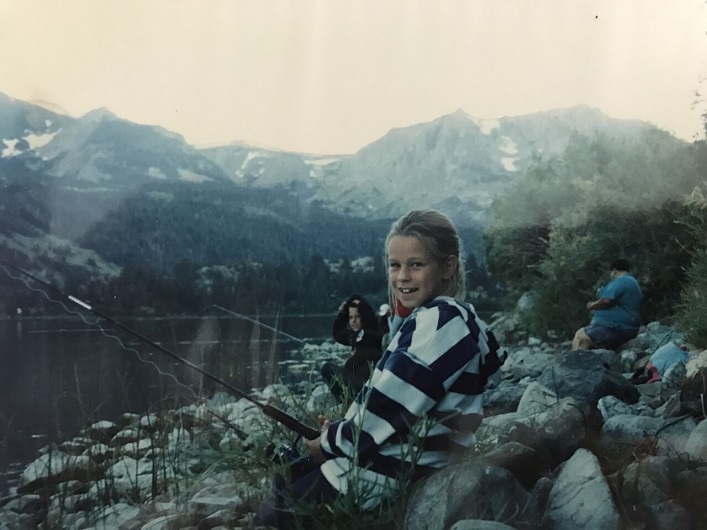 My first memorable experiences with public lands occurred in Southern California over a seven-year period during which my parents homeschooled my five siblings and me. Our education included regular trips to public lands and parks such as Mono Lake, Kings Canyon, Yosemite, and June Lake. In these places, I noticed how the air felt crisp and smelled like pine — how quiet and peaceful it was. I associated those positive feelings with the fun I had hiking, fishing, and camping.

Eventually, my Dad changed jobs and we moved to the suburbs of Cincinnati, Ohio, where things changed for my family. We all started going to private school and we stopped exploring. For the remainder of my middle and high school years, the places I spent outdoors were in the woods behind my parent’s house, on a field hockey field, and in and along the Little Miami River. 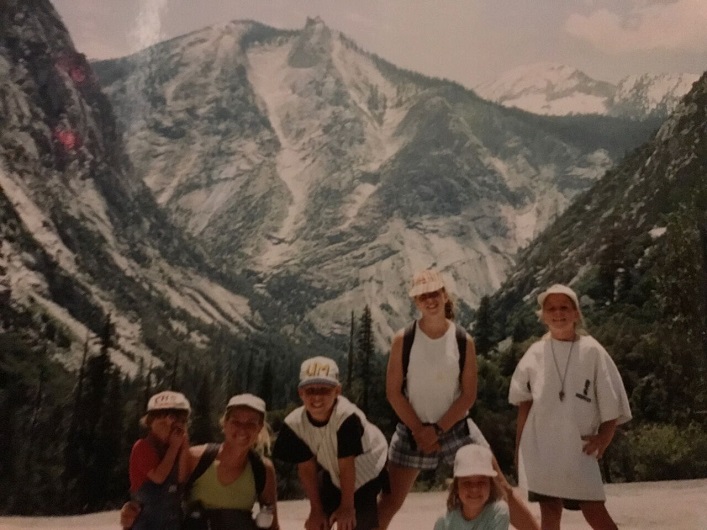 I didn’t find the desire to explore again, until I started riding bicycles. The more I rode around the suburban sprawl-inflicted countryside by my parents house, the more I desired finding a quieter, more scenic place to enjoy my rides. I looked to Google Maps for inspiration and noticed the solid green spaces outlined on the standard map. I zoomed into to the closest one to home and found Shawnee State Forest.

After an hour and a half of driving, I found a natural amusement park of winding rolling gravel roads through lush forests and eroded valleys in the heart of the Appalachian foothills, devoid of cars and people. I had lived in Ohio for 12 years and had never seen a place so beautiful. I rode a different pace in Shawnee State Forest. Rather than rushing through my ride, I enjoyed longer and more frequent breaks, just to soak up my surroundings. I was hooked and I started to explore more of those green solid spaces on Google Maps throughout the Midwest, Southeast, and eventually across the country by bicycle. 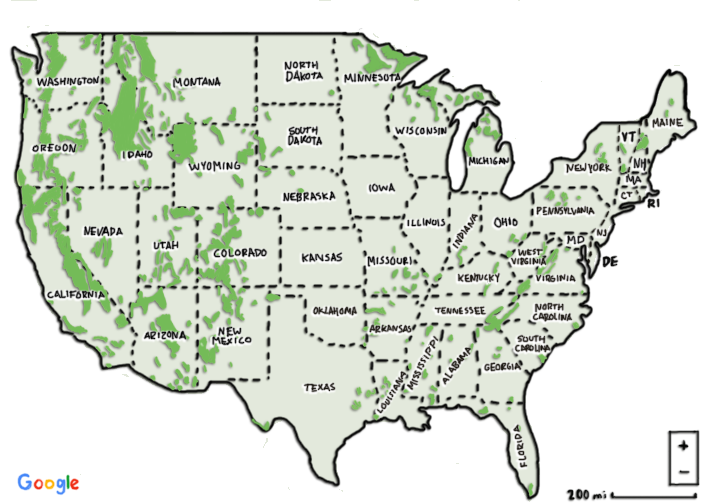 Apart from the stimulation I get from immersing myself along the gravel roads in these beautifully diverse landscapes and ecosystems, my favorite quality of our public lands is the freedom to camp. On my first long, cross-country trip I gained an appreciation for this freedom in Great Smokey National Park and Chattahoochee National Forest in North Carolina and Tennessee, the Ouachita National Forest in the Ozarks of Arkansas, the Rio Grande, San Juan National Forests in Colorado, Manti La Sal National Forest in Utah, the BLM land in Nevada, and the Umpqua and Winema National Forests in Oregon. In all of these places, I took advantage of my legal right to camp freely in nature. The majority of the space between these places is private, protected by frequent bold signs and barbed wire fencing as a reminder.

For people traveling great distances by bicycle, camping is a necessity. When traveling through heavily privatized expanses of land, options are limited to private campgrounds, where you pay three-quarters of the price of a motel to pitch your tent 20 feet away from a motor home, or the generosity of strangers, if you’re so lucky.

The other option is to secretly camp somewhere you are not really supposed to be. To camp in secret is a reality of bicycle touring where a restful time can be a stressful time. Since you are not technically supposed to be there, it’s easy to feel vulnerable and paranoid. Camping in our public lands is so much more enjoyable for the peace of mind that you are allowed to be there. Not only are you permitted to camp, you also have the option to choose the quality of the place you are going to call home for the night. In a free environment you have been able to select, camping is at its best. 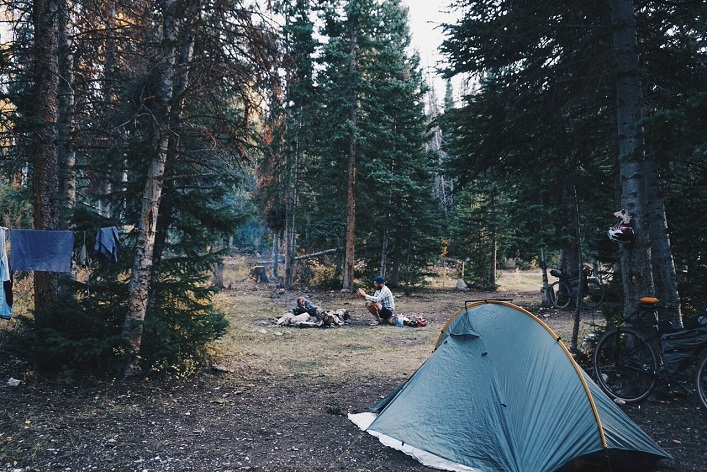 As tax paying U.S. citizens, our public lands are one of our greatest privileges. There are 640 million acres of public land and we each own a little piece. That is a whole lot of space to call our backyard. Get out there and enjoy it this Bike Your Park Day, September 30, 2017! 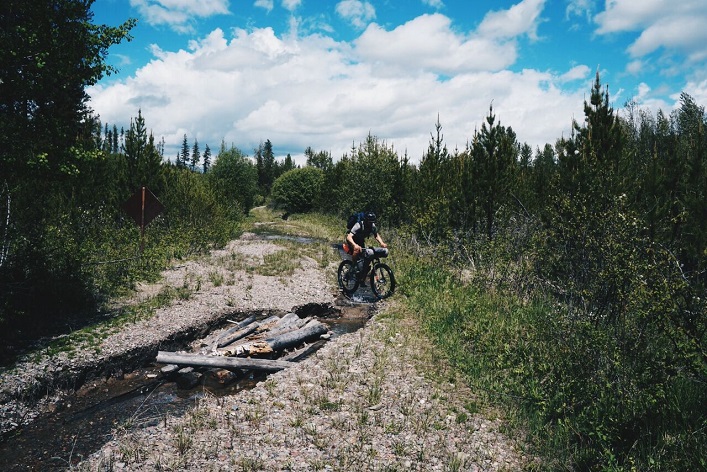 Find Parks Near You

To quickly find parks near you, go to the standard map view on Google Maps and zoom the scale to 100–200 miles. The solid green spaces show everything from city, state, and national parks to state and national forest. To find BLM land, visit blm.gov/visit for a comprehensive BLM recreation map.

Gravel Routes To Ride For Bike Your Park Day

Yellowstone Mammoth Hot Springs Out and- Back (12 miles): ridewithgps.com/routes/23004395

Dispersed camping is the term used by the National Parks Service, National Forest Service, and Bureau of Land Management to describe camping outside a designated campground. Dispersed camping means no services. There is no bathroom, no trash removal, no water spigot, no picnic table, or fire pits. Review the Seven Principles to Leave No Trace before choosing your next dispersed camping spot, lnt.org/learn/seven-principles-overview. 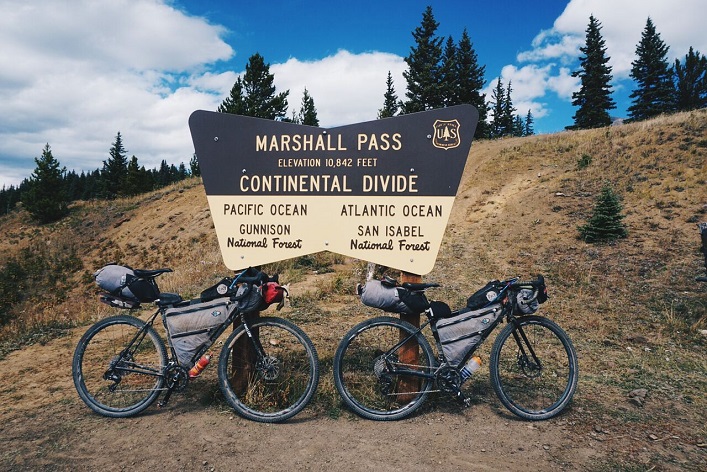 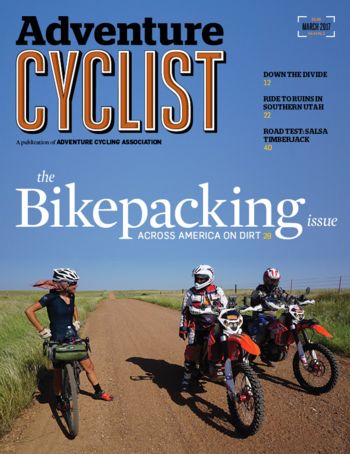 Try to keep up with Sarah Swallow. Heck, if you just Google her name, you’ll come up with all kinds of good stuff. Plus, she appeared on the cover of Adventure Cyclist magazine in March 17