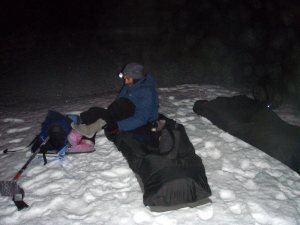 When I’m traveling by bicycle, I like to keep camping as simple as possible. Especially when I’m traveling alone, I try to maximize my time on the bike and minimize the time I spend doing “camp chores.” For this reason, I usually opt to eat sandwiches over cooking an evening meal, don’t usually build fires, and don’t like to spend time constructing elaborate shelters.

However, when traveling as light as possible is also your goal, it can be difficult to find a lightweight shelter that doesn’t require extensive staking or outside objects — such as trees and poles — to erect. Also, commercial lightweight shelters — such as tarp tents and Megamids — generally leave out what I consider the most important part of a shelter: a solid barrier between me and the cold, wet ground. I could carry the necessary ground cloths, bug nets, hiking poles and stakes needed to erect these shelters. Or, I can just sleep in a bivy sack.

A bivy sack is a thin waterproof shelter designed to slip over a sleeping bag, protecting the bag and the person inside from the elements. You just throw it on the ground, stuff your sleeping bag and mat inside, and you’re ready for a night of sleep. Some bivy sacks come with a single pole to hold the end of the bag away from the sleeper’s face. The simplest versions are little more than nylon bags that provide insulation against wind chill and rain. This is the version I prefer to use. I have a Black Diamond Winter Bivy made out of water-resistant Nextec fabric that weighs a mere 9 ounces and packs to the size of a burrito. I have snuggled up inside my bivy in a range of conditions, including winter camping in 35 below zero, a 60-mph windstorm, and a light rainstorm that lasted the entire night. The sack has proved itself to be a great barrier from the elements, durable, and in its own way comfortable (bivy sacks are cozy but they don’t favor the claustrophobic.)

The drawback to bivy sacks, besides confining the sleeper to a small space, is unavoidable condensation. Breathable waterproof fabrics such as Gortex help reduce the amount of moisture that builds up inside the sack, allowing humidity to pass through while also holding out moisture from outside. Another solution is to use a vapor barrier liner, which keeps humidity from penetrating the sleeping bag.

Bivy sacks can also become a drag if you’re forced to spend a longer period of time hunkered down, such as waiting out a storm. Plus, all but the most waterproof (and therefore non-breathable) bivy sacks can’t hold out heavy rain. When I’m facing the possibility of a larger storm, I pack a small tent. My Big Agnes Seedhouse SL 2 tent weighs in at 3 pounds 6 ounces and easily dangles from my handlebars on my pannier- and trailer-free bikepacking set-up. If you don’t require a floor (as I mentioned earlier, I like my shelter to be completely enclosed), you can set up the fly alone and pack as little as 2 pounds, 2 ounces of waterproof shelter. Plus, this tent can cozily fit two people, which makes it a good option for trips with a friend.

Of course bivy sacks aren’t for everyone, but for simple, lightweight sleeping solutions, there’s really nothing better.

Being a cheep-skate, I am using my old Bibler bivy with a light hammock(I forget the brand) I got on Amazon with an xl Hennesy snakeskin and a DD xl camo tarp.. I already had the bivy from years ago. Trying to get it all in a 45 liter backpack from Columbia. a bit addhock, but i think it will work..??

Check out this versatile tent:

Hollis - I am talking about a bike with a frame bag, seatpost bag, and something dangling from the handlebars. Not sure what you mean in regard to frame durability.

+1 for the hammock. 2lbs (or less), and the most comfortable night's sleep inside or outside. Only weakness is cold, but a good sleeping pad goes a long way. And I rode the Southern Tier across a lot of desert, and always found a spot to hang it. I never want to sleep on the ground again.

this summer, when I started to get into bikepacking, I shied away from shelling out the $$ for what I was recommended as the best tent for lightweight bikepacking, a Vaude Power Lizard UL, and looked around for cheaper alternatives.

Planning to go where mosquitos would be a problem, I came to bivies, which (having grown up with tents) I was new to, but then stumbled over a bivy hammock from ddhammocks, and decided to give that a try.

While being a bit on the short side of a hammock for my 6'5", it did its job nicely for a couple of nights, together with a tarp (also by DD), an inflatable mat, and a down sleeping bag, all strapped to my MTB. If you run out of hanging options, the bivy-hammock acts as a bivy itself, with a waterproof bottom and mosquito netting - you just have to find a way to build a roof with the tarp, or use it as a blanket, when it rains, if it gets really ugly, you can sneak between the double layers of the hammock.

While I am the first to agree that it is a bit of a compromise, I enjoyed the nights with this setup as a hammock quite a bit (down to 8°C, ~46°F) and will use it again next year.

For info on this setup, look at http://www.ddhammocks.com/products/hammocks/travel-hammock - for more input on hammocks, I was very glad to find the community at www.hammockforums.net

Hi Jill, is your "pannier and trailer-free bikepacking set-up" the frame bag story that you wrote last time? Any more enlightenment there with re: to frame durability?

I've used a variety of shelters while backpacking and cycling, my favorite bivy was a North face I had a few years back that had a small dome over the head, and even a rain fly for that dome.

Currently, I really like the REI quarterdome T-1 tent. to me its the perfect blend of a bivy and a larger tent. Reasons why I love this tent:

1. Its small - about the length and width of my sleeping bag with just enough room for my handlebar bag to come inside with me.

2. A nice deep bathtub. I slept through one of the biggest storms of the year about a block from Lake Michigan and slept soundly through the night dry and warm.

3. Its small size and multiple stake out points make it good and sturdy in wind.

4. You can sit up in it. I spent a stormy day along the Blue Ridge Parkway cozy and warm reading my kindle.

5. Vestibule. I'm not quite as light as you yet and still ride with panniers. Its great to have a place to stash my gear.

6. Ease of setup. The T-1 is a simple free standing three pole dome. i can be set up and in the tent in five minutes or less. Not quite as fast as a bivy but its a trade I'll take for all the other reasons above.

A good bivy is a joy, but after spending late summer and fall with my T-1 I'd be hard pressed to go back.