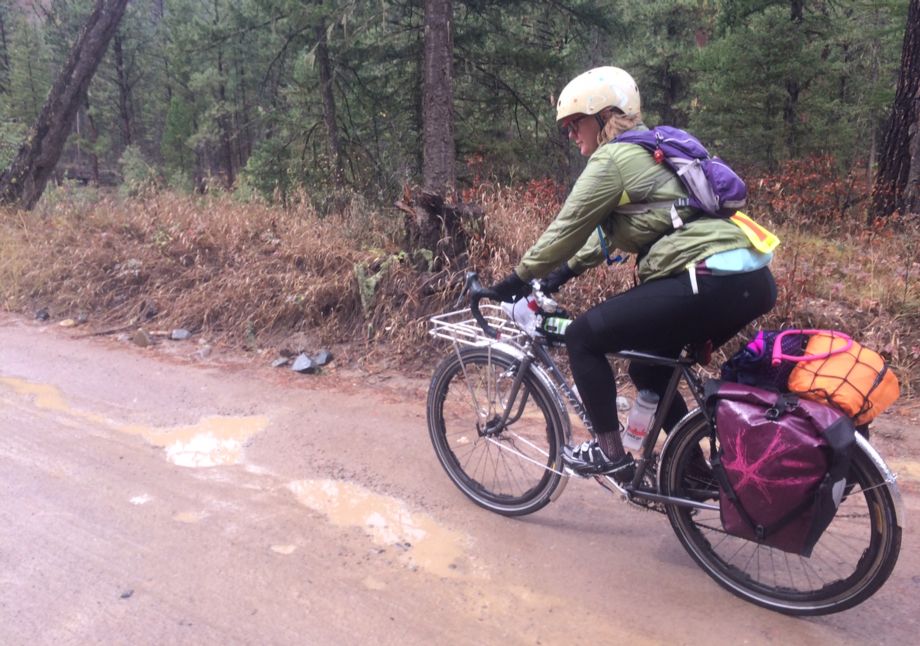 “Of all the paths you take in life, make sure a few of them are dirt.”
–John Muir

The Skalkaho Pass loop is a local favorite here in Missoula. With stunning views and meandering dirt roads along rivers, it’s not hard to see why. Check out Adventure Cycling Tours Specialist Emma Wimmer’s first dirt tour, and how she used that learning experience to introduce others to to dirt touring.

Whitney and I had recently moved to Montana from the west and east coasts respectively, and wanted to do a bike overnight leaving from our new home in Missoula. After querying our Adventure Cycling colleagues, we decided to ride to Skalkaho Pass, inspired by a post on BikeOvernights.org.

Preparation for this bike overnight went well: After getting 35mm tires installed on my bike, along with fenders and racks, I did a training ride up nearby Deer Creek with some friends early in the week, then on Friday night, I packed my panniers.

The next morning, I awoke refreshed, loaded my bike, and rolled over to the coffee shop. Not really craving caffeine, I grabbed a day-old bagel, and we rode off into the distance, headed east on Broadway Avenue. We wound through the valley, surrounded by mountains and low-lying clouds. We pedaled along, finding a multi-use path disappearing as abruptly as it began, and stopped off at a gas station in Clinton, Montana for a snack break, and watched the rain roll in. I grabbed plastic bags to waterproof my gloves, and we headed out toward Rock Creek Road.

The rain picked up so we stopped at Trout Bums to eat our lunch and the owner kindly invited us to eat in her home. Fed, sorta dried, and warmed, we headed out. Soon the road turned from pavement into dirt and we followed the river, seeing people fishing and heading to various hiking trailheads. 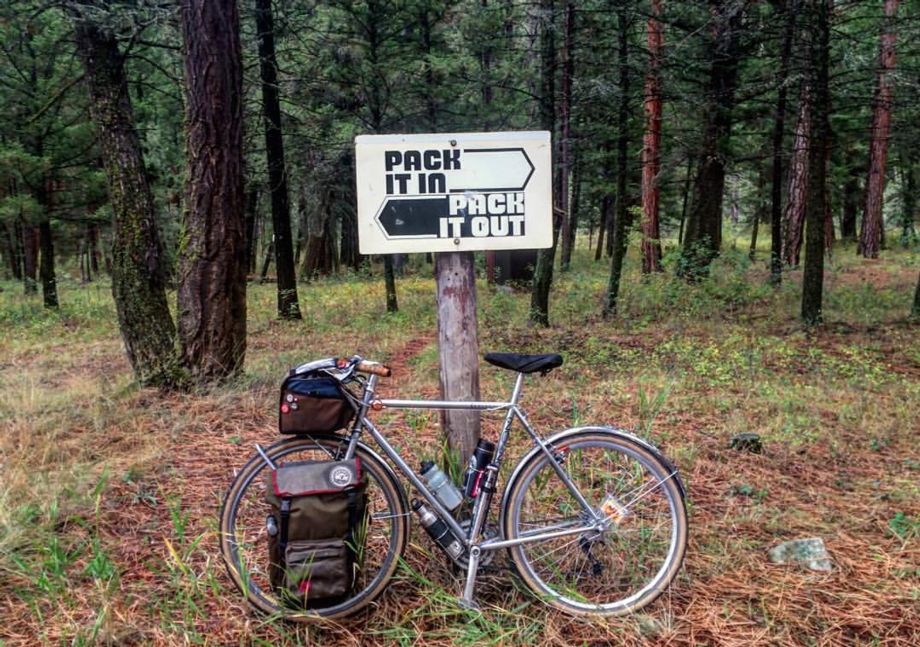 We heard thunder roll through the valley as the rain picked up AGAIN. Soon it started hailing. The dirt road had become a puddled-up muck, but remained fairly flat with a slight incline until we hit a steep uphill. I tackled it, quickly dismounting to walk. Whitney powered up the hill the rest of the way, waiting at the top as I attempted to drag my heavy bike up the steep grade. We continued on, taking in the amazing scenery: grassy valleys, trees on the mountainous ravines above, and green everywhere. We stopped at the next campsite for a snack and spied a moose.

We passed one campsite after a while, then we passed a ranch. I grew worried that the map was wrong or outdated and that we would not find our campsite. Our MapMyRide map was way off at this point. It was getting darker and darker and after a full day of dirt riding, I got more and more tired, bonky, and irritable. I silently pedaled along, just trying to keep going. Surrounded by agriculture and darkness, me close to panicking at this point, we pulled up to the first lit house we saw to ask if we could camp on their land for the night. Whitney went up to the door while I held the bikes and I overheard, “Why don’t we just drive you to the campground?” 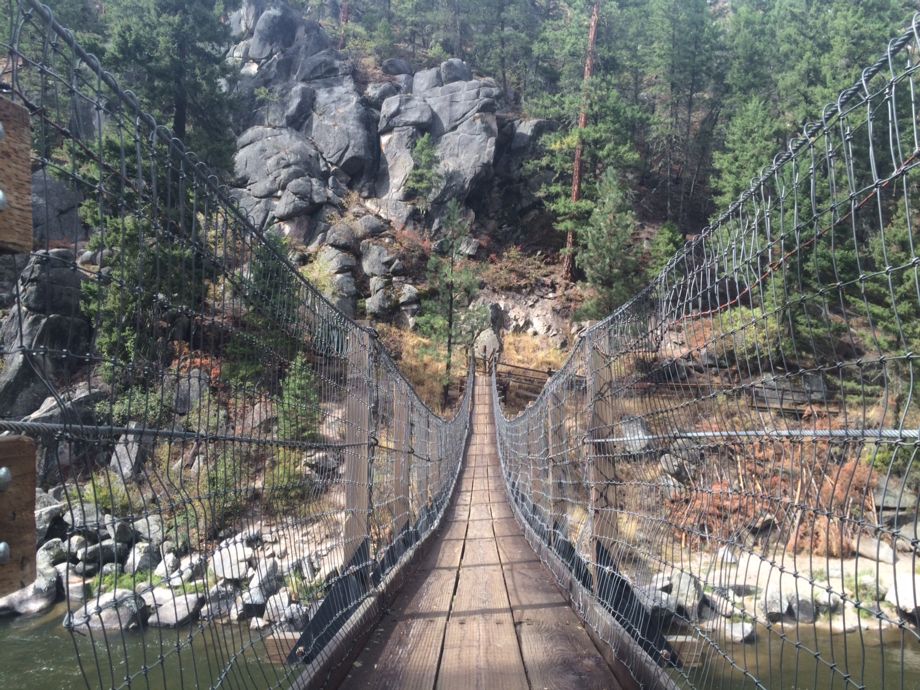 A man and his wife came out and helped us load our bikes into the bed of their truck. We told them we were planning to camp near the top of the pass, but the rancher advised very strongly against this. “There’s at least two packs of wolves up there, lots of grizzlies this time of year … and some mountain lions, too.” Lions, and tigers and bears — oh my!

We took their advice and they drove us to a camp near the base of the mountain. Setting up the tent and heating up dinner on our camp stove, we made a comfy camp (despite a few minutes of tiny snow flurries). Freezing inside our sleeping bags we finally drifted off to the sound of coyotes in the nearby woods — wow-oo-wow!

I woke up sweaty as the morning sun came up strong. Packing up and crawling out of the tent, we slowly got ready and headed straight up Skalkaho Pass. It’s uphill from the beginning and we saw more bear warning signs. The road turned again from pavement to packed dirt, and we saw a few more cars. We stopped a few times for temperature adjustments — jacket on, jacket off, the sun’s heat vs. the wind’s cool, and continued. The mile markers seemed to go by slow with the Skalkaho Waterfall beckoning ahead.

At times, during the uphill crawl, I got off my bike and walked, tired and worn out from the day before and today, climbing in the mud. But before we knew it, we pulled around an uphill bend and hit the top of the pass. Photo ops followed by shifting up several gears and we prepared for a bumpy descent.

This part was scary. I am used to long, gentle declines that open into a flat expanse. This was the opposite: steep, short, hairpin turns. My hands death-gripped the handlebars. Whitney coached me to pulse on the brakes to let my hands rest. It helped! We finally reached beautiful Skalkaho Falls and soon enough, the steep descent flattened out and a solid double yellow line appeared. The day was still beautiful, we took in the gentle rolling hills, and I thought, “All that dirt and mud and up and down was worth it.” 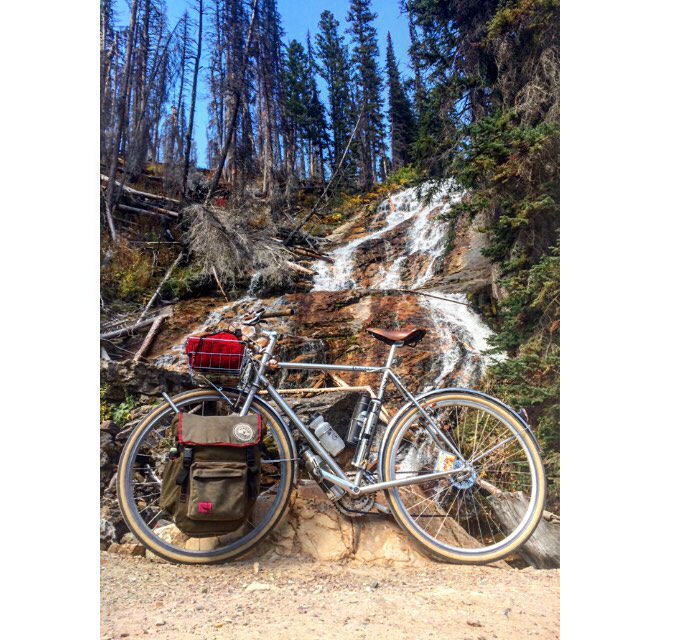 We stopped at Bitter Root Brewery in Hamilton to enjoy some IPAs and real food — bacon and fried cheese-curd-topped burgers with sweet potato fries — just what we needed with only fifty-ish miles left on our tour! We left and headed to the bike path alongside 93, heading north with more energy from our meal. Just past Florence, the skies opened up and the rain fell so hard we both took our glasses off to try and see the dark path. We stopped to put on rain gear and pedaled as fast as we could in the deteriorating conditions. The rain the day before had been light and not too unpleasant, but this seemed down right dangerous! This was the perfect time to discover that my light had become detached from my handlebar and was lost, probably somewhere up on the pass.

We arrived at a gas station in Lolo, pulled over, and called for a ride since no one should ever ride the narrow part of 93 near Missoula in the dark, but the new Missoula 2 Lolo Trail will fix that! We ate gas station pizza and soon, Arlen and Shawn picked us up and kindly dropped us off at our respective homes. I pulled off my soaked stuff and, shivering, jumped into a hot shower to warm up. I slept so well that night. 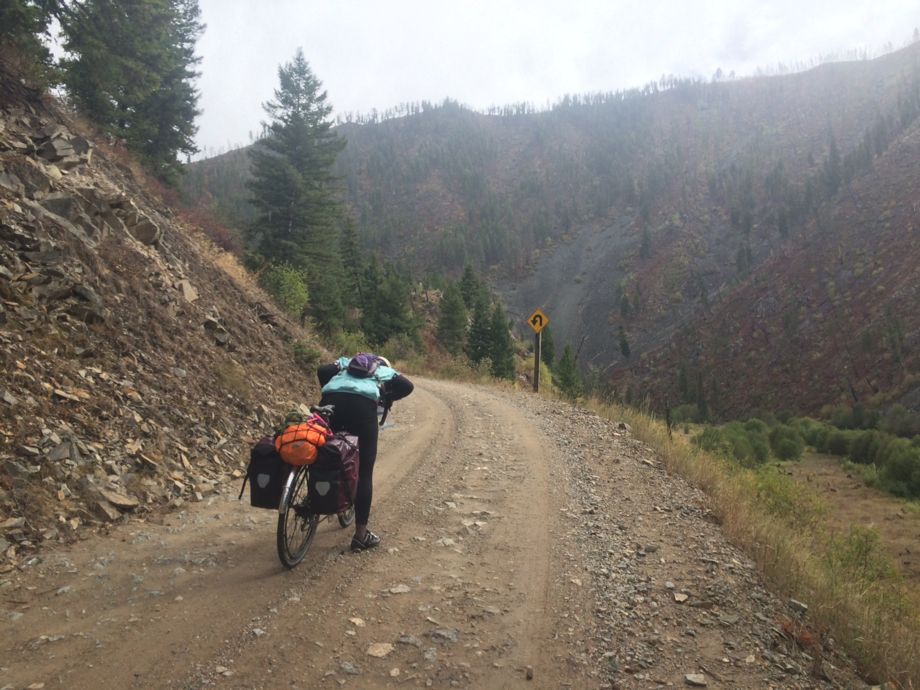 Check out Emma’s next adventure Dr. Bikelove: Or How I Learned to Stop Worrying and Love the Dirt, in which she introduces a few more new faces to dirt touring. Anyone can do it!

This is very interesting. I just had a custom touring bike built and will be picking it up in two days. I'm excited to try some overnight adventures!