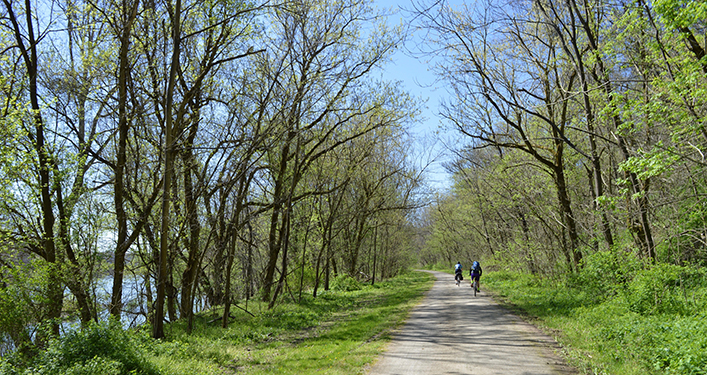 Mist rising from the waterfall shimmers in the late afternoon sunbeams that cut through the forest. As I look up at the ravine wall we’ve descended to stand next to this beauty, I’m reasonably sure that we can climb out, and in any event, I decide it was worth it. For the past few months, all of the waterfalls we’ve encountered have been encased in ice. Unleashed by spring, water travels unencumbered here on the Great Allegheny Passage (GAP), and so do we. Throughout our journey, we’ve occasionally been joined by bunnies that hop along the trail with us. More than once we’ve found ourselves involved in a friendly race with a butterfly, and we’ve discovered that waterfalls like this one, strengthened by spring runoff, are almost commonplace. With trail towns along the way offering good food and rest for the weary, we understand now why this trip is often referred to as the “ride of your life.”

Just a few days ago, my two teenage sons and I loaded our bikes and bare essentials in the car and left our snow-packed yard to embark on this trip we’ve been planning since the days were short. We looked for a scenic rail trail of considerable mileage in an area that would be warm in mid-April, and within reasonable driving distance from our home. A bit of research on Adventure Cycling’s tours and routes led us to the GAP, a 150-mile rail trail that winds along rivers and through mountain passes from Pittsburgh, Pennsylvania to Cumberland, Maryland. We looked up the average temperature for the region in April and found that it was 61 degrees. We were sold. Halfway into our journey, standing next to the falls, we’re fully immersed in spring and exceedingly happy with our trail choice.

Two days ago, we arrived in Cumberland, Maryland, parked our car, and rented a minivan to drive into Pittsburgh. It took two and a half hours to drive from Cumberland to Pittsburgh, and it would take us four leisurely days to bike back. In the Enterprise parking garage in downtown Pittsburgh, we unloaded our bikes, strapped the panniers to the racks, and took turns taking the elevator down to the ground floor. Our two-wheel adventure was officially underway. Out on the city street, we were surprised to find a bike lane waiting for us, separated from the road by intermittent barriers. My fear of riding in the city disappeared and we maneuvered easily through the streets to the confluence of the Monongahela, Allegheny, and Ohio Rivers at the tip of Point State Park, the start of our journey. After taking some time to relax in the warm sunshine, we set off, following signs for the GAP. 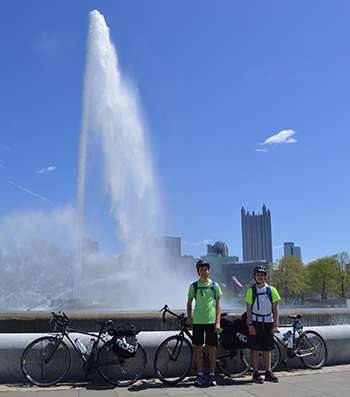 The Hot Metal Bridge, the first of many impressive bridges we’d encounter on the trail, framed our last glimpse of the city skyline. Soon cityscapes transformed into suburbs, and before the day was through, we wound through the woods on a quiet trail along the Youghiogheny River (yok-uh-gey-nee). At sunset, we arrived in the lovely town of West Newton, Pennsylvania and made our way to the Bright Morning B&B, where Mary Lou and Rob welcomed us warmly. We parked our bikes in the bike garage, took hot showers, put in our breakfast requests, and walked up the road to Trailside Pub for a well-earned meal.

After exchanging cycling stories and route ideas with a father-and-son-in-law duo over a hardy breakfast the next morning, we headed off on what we soon discovered was the most beautiful section of the GAP trail. The Youghiogheny was our constant companion as we meandered 41 miles through remote sections of state park forest and quaint trail towns from West Newton to Ohiopyle. Two straight lines of towering tulip poplars framed many miles of this portion of the trail, their branches still mostly naked, etching the blue sky. At their roots, a shire-green understory adorned with creeping phlox grew greener and thicker almost before our eyes. It was on this idyllic stretch that we were enticed off the trail by two paths, the second of which led us down into the ravine. 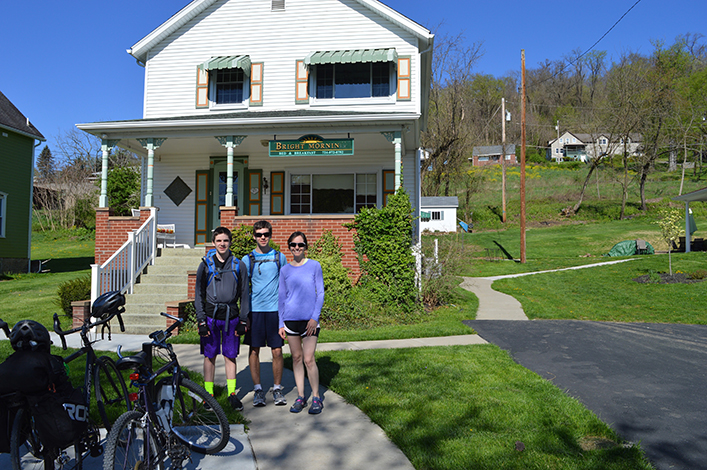 Our journey thus far had already included many mini falls — spring runoff cascading down ledges that line many sections of the trail. There were so many, in fact, that we stopped pointing them out and just admired them quietly as we rolled on. But when we saw a sign for Mitchell’s Field near mile marker 75, we felt compelled to follow the trail. We had read trip reports touting short hikes along the trail that led to noteworthy falls. Parking our bikes in the trees, we headed up a narrow footpath nearly obscured by lush rhododendrons. As we moved up the trail, gently pushing branches aside, we were astonished when the last thicket of bushes revealed a spectacular multi-tiered waterfall. We took our shoes off to cross the stream and take in the falls from all angles. Only the thought of a good meal eventually pulled us away. 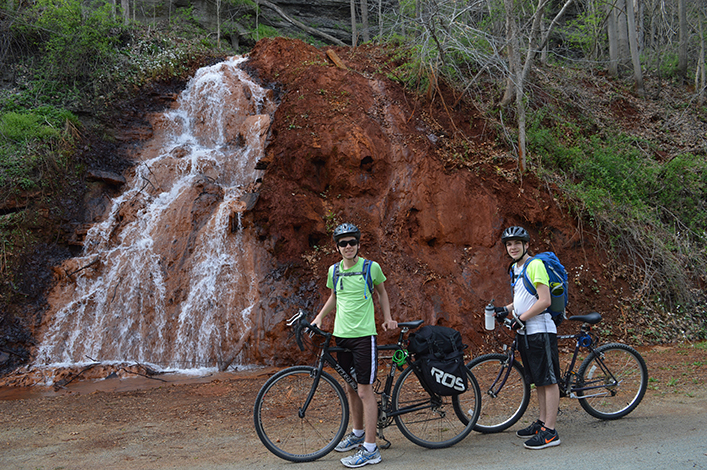 Back on our bikes, we soon encountered another sign, this one for Johnson Run Trail, and despite growing hunger, curiosity led us to explore what this path might hold.

It didn’t take long to catch sight of this waterfall, but it was far below us, down a steep ravine. As we began down an obvious path, it quickly transformed into a muddy mess beneath last year’s fallen leaves. With each step, I considered turning back, but soon I was about three quarters of the way down, and my sons were descending above me. For better or worse, the decision had been made. As I considered the thought of spending a night next to the falls, I took a mental inventory of my bag to determine if I had anything that could help us: a first aid kit, an annotated map full of Post-It notes about explorations along with way (including this one), our itinerary and reservation information, chocolate, and a deck of cards. No rope, or any suitable substitute, which I think is the only tool that could have been useful in this situation. I resolved to add rope to my bag of necessities and assured myself that we wouldn’t need it.

After spending some time admiring the dramatic falls, sharing a few pieces of chocolate and wondering aloud what dinner possibilities might await us at our next stop, we began to discuss our options for climbing out. We all settled on slightly differen 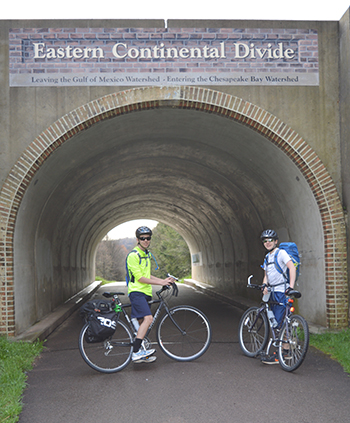 t variations of the same general route, and as we made our way up, careful to avoid new vegetation, we offered friendly suggestions to one another. It took some time and a few failed attempts — including some small setbacks and some that sent us nearly back to the bottom — but in the end, we all made it to the top where we assessed our varying degrees of muddiness and minor scrapes, and moved on.

In the glow of the late afternoon sun, we found the beautiful town of Ohiopyle a few more miles down the trail, and made our way to the MacKenzie House, where we had rented a room for the night. We clapped the mud off our sneakers, changed into clean clothes, and walked down to The Falls Market to feast on burgers, recount our fumbles on the ravine, and wonder what adventures awaited us further down the trail.

Over the next two days, we followed the trail with its remarkable bridges and long tunnels that have been painstakingly restored to their former glory. Guided by the Casselman River, flowering redbuds, and, finally, by the old Western Maryland railroad tracks, we pedaled on. On our last day, under blue sky and deliciously warm early-morning sunshine, we crossed the Eastern Continental Divide and marveled about how two drops of rain tumbling together from the clouds will travel entirely different journeys after landing on one side of the divide or the other.

I don’t know where my sons will land, or where their journeys will take them, but for now I’m grateful that we’re all traveling together, and I’m comforted by the thought that they’ll carry our adventures with them as they forge their own paths.

You can learn more about the Great Allegheny Passage at gaptrail.org. At $10, the TrailGuide, which comes with maps, is a worthy investment. John Urman’s film On the Passage is also a terrific preview of the “ride of your life.”

You’ll find a bike-travel map of nearly the entire GAP Trail with Adventure Cycling’s new route: Chicago to New York City, (CYNC). Check out Section 1 of the Philadelphia Alternate on sale in our Cyclosource online store.

Thank you for a great description of your ride! What is the surface? Can it be done on road bikes or are hybrids preferable? I'm worried about mud (and cold) in early April, but it sounds like it might be worth it!

Hi Mary, It's mostly packed crushed limestone surface, with a few paved sections. We had touring bikes. The crushed limestone surface drains really well, but even so, I think you'd be more comfortable on a hybrid versus a road bike. We went in mid-April and it was warm - around 65 degrees. The trail was not muddy at all. Have fun! It's a terrific trip!

Thanks Sarah. I've been thinking about what trip I want to do this spring, and I think this just may be it!

You're welcome, Bob! Spring is the perfect time to ride the GAP. I hope you do it. Enjoy!

Thanks Sarah for the very informative blog,this is a trip we are planning,thanks for the great accommodations suggestions !!

A great story and fun adventure! Someday I'll ride the GAP and check it off my list of must-do rides. Thanks for sharing!