Snow, mudslides, and road construction may cause delays on the Adventure Cycling Route Network. Here’s what we know right now, and here’s where traveling cyclists can stay informed: Temporary ACA Route Road Closures.

The best laid travel plans can be thwarted by Mother Nature. You should be aware of the following if your plans include travel in the northern U.S. in late spring and early summer 2018.

Late winter storms have increased snow levels higher than normal in the Rocky Mountains of Canada and Montana. As a result, some mountain passes will be closed until later in the season.

If you are riding the Northern Tier or the northern part of the Great Divide Mountain Bike Route, you might want to delay beginning your trip by several weeks. Warm temperatures this spring may speed the disappearance of snow, but flooding is also predicted in some areas. And of course, a cool spring will slow the melting of the snow on all mountain passes.

In Glacier National Park, no date has been set for the opening of Going-to-the-Sun Road over Logan Pass. Updates on the status of the road can be found at the park website.

Though the collapsed Pfeiffer Canyon Bridge has been replaced on SR 1, California is still dealing with mudslide cleanup from 2017. The massive Mud Creek slide on our Pacific Coast bicycle route’s section 4, map 49, hasn’t been cleared yet and will keep 5.7 miles of SR 1 closed until September 30, 2018. The closure is north of Ragged Point in Monterey County. A detour and shuttle information is discussed in this forum:  Temporary ACA Route Road Closures.

Other closures may occur periodically on SR 1 through the spring. Closures are listed at Caltrans Highway Conditions website, as well a wealth of information at the blog BigSurKate. Additionally, if we learn of further closures, we will post information to our Temporary ACA Route Road Closures forum discussion, and we encourage cyclists to do the same. 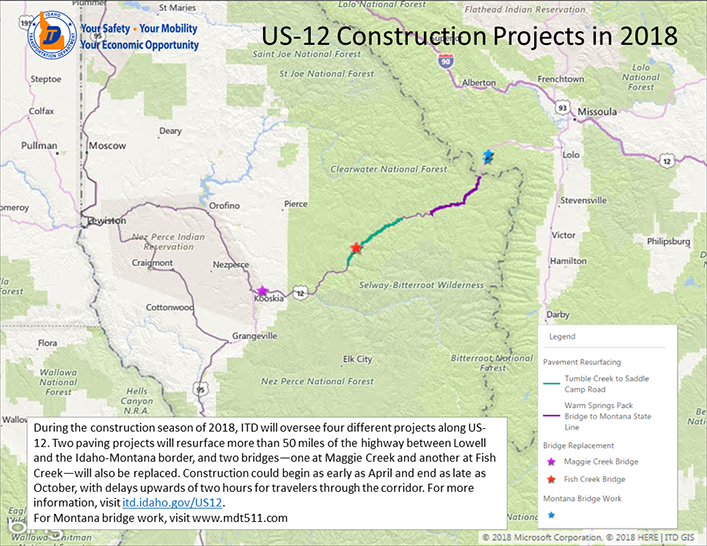 In Idaho, more than 50 miles of roadwork and two bridge replacements will occur between April and October 2018 on U.S. Highway 12 along the Lochsa River corridor. This affects the TransAmerica Trail, sections three and four on our maps, and the Lewis & Clark Trail, sections five and six on our maps.

There will be significant delays. Adventure Cycling is still talking to the Idaho Transportation Department (ITD) about options to help cyclists traverse the roadway. ITD is maintaining a project website to keep the public up to date. We will also add more information to the Temporary Route Road Closure Forum discussion for the TransAmerica Trail and Lewis & Clark Trail bicycle routes as we have it.