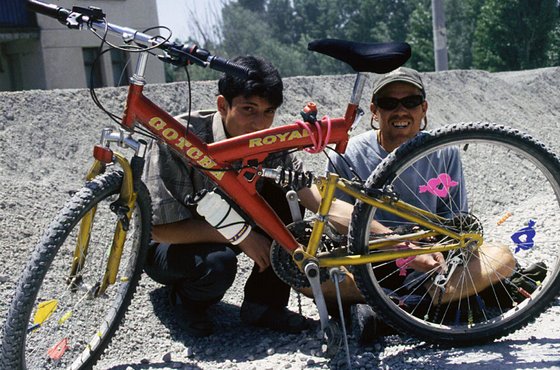 You are leaving on long trip to Africa or South America or Asia or an extended world tour ... what do you bring for gifts?

There is only so much room in a set of panniers. I'm from Seattle--do I pack 50 bags of gourmet coffee or smoked salmon? A box of Space Needle key chains would take up less room, but tourist trinkets have never been my thing.

Some travelers pack pens or candy or balloons. Anybody who has traveled in India knows the "One pen--One pen--One Pen" chant little kids on the street greet you with.

What has worked for me over the years is to pack a box of 100-plus bike tube patches and a couple of large tubes of glue.

Fixing a flat for a fellow cyclist in the U.S. would be seen as a courtesy. A nice gesture. In a country where wages are insanely low, fixing a flat tire or two can be an invaluable gift.

In Cuba, it cost 6 pesos (at the time) to have a flat tire fixed. That was a full day's wage for most laborers. One house we stayed in had three bikes stacked in the corner of the living room. They'd been that way for months. An hour and three patches later, the kids were out riding them on the street.

I believe my record for fixing flats was 17 in one afternoon in Mexico. A kid walked his bike up to me in a town square. Both tires were flat. I got to work and in the middle of fixing his second flat I glanced up and 8 more kids were in line. The bike doctor was in. My hands were filthy and sore when I finished, but the pack of smiling kids pedaling behind me as I left town was well worth the effort.

Now that's a gift worth packing.