Full disclosure: as a born and bred Minnesotan, I have a soft spot for Minneapolis-based companies such as Otso Cycles.

I like bikes with good names, especially names with historical pedigree. Otso (Finnish for “bear”) chose well in naming the Voytek, their carbon fat bike. Polish for “joyful warrior,” Voytek is also the name of a hard-drinking, chain-smoking, Nazi-killing bear. (Think I’m kidding? Google it.)

If you haven’t heard of Otso Cycles, don’t feel bad. Established just last year, Otso is the bicycle arm of Wolf Tooth Components. Wolf Tooth, whose three co-owners are all mechanical engineers and avid mountain bikers, offers a well-rounded catalog of problem-solving doohickies, and most of its products are made in Minnesota. 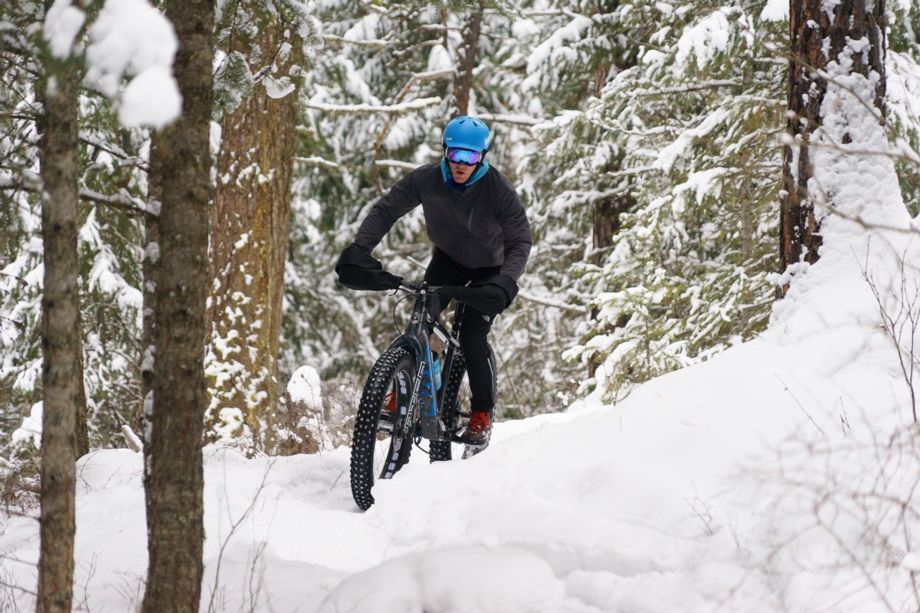 If you’ve spent time pedaling a fat bike, you’ve likely noticed the wide Q Factor. (For serious nerd-level detail on Q Factor, check out the glossary in our Adventure Cyclist Fat Bike Buyers Guide 2017.) It’s not terribly comfortable, and you may even walk away with a little more Gary Cooper to your gait than usual after a long ride.

“The Voytek came about because we wanted a fat bike that handled like a mountain bike,” said Dan Dittmer, creative director and co-owner at Otso. “One of the biggest hurdles to making that happen was the requirement for a special offset chainring, but we were uniquely positioned to do it because Wolf Tooth could make a custom offset ring for the bike.”

That offset chainring, along with a narrower bottom bracket shell — press fit 107 (the equivalent to threaded 83mm, the old downhill mountain bike spec) is awfully close to the modern mountain bike 73mm standard and quite a bit narrower than most other fat bikes — and some careful shaping of the frame’s chain- and seatstays, allowed Otso to produce a bike that can run tires as wide as 4.6in. while spinning a narrow Q Factor of 188mm.

Otso makes a big deal of the bike’s Q Factor — as well it should — but its true engineering showpiece is the Tuning Chip dropout system, which allows you to adjust the chainstay length from 430mm to 450mm to account for wheel and tire size or to slightly alter the bike’s geometry. Lengthening the chainstays drops the bottom bracket by a few millimeters and gives the Voytek a more planted feel, whereas flipping the chips to the shortest position will lend the bike a more nimble and agile ride.

Flipping the Tuning Chips is about as idiot-proof a procedure as you’re going to find, and it’s incredibly clean looking. I’d go so far as to call it elegant. During my time with the bike, I made a point of flipping the chips often when swapping wheels, and the procedure never once gave me trouble. Moreover, the dropout system tucks the brake caliper neatly into the rear triangle, which is maybe my favorite bicycle design motif. 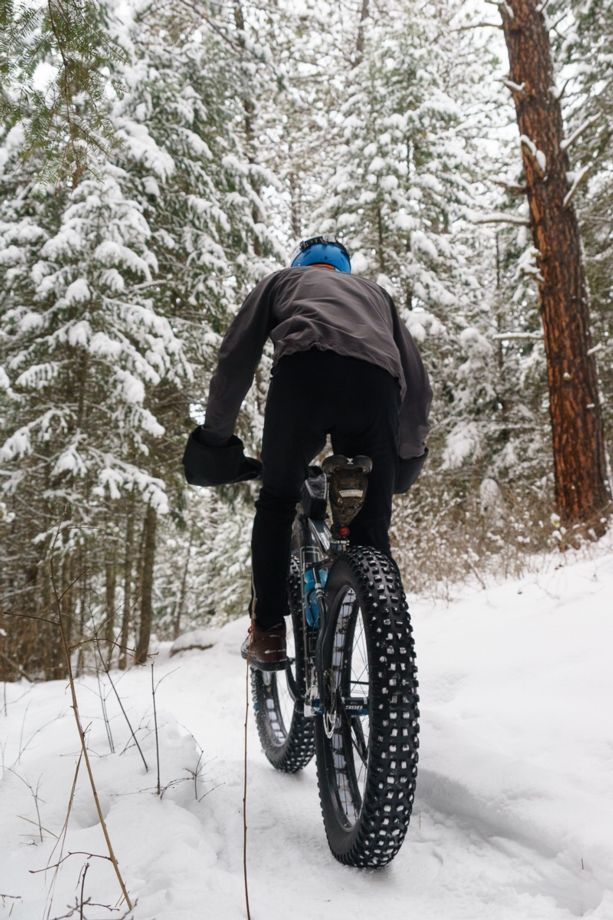 You don’t need all the bikes

The benefits of the Otso’s narrow Q Factor are compounded when you consider just how versatile a bike it is. Run the rigid carbon fork and 4.0in. fat bike tires, and it’s a chubby winter race rocket. When the snow melts, swap in a suspension fork — Otso recommends a maximum of 120mm travel — and 27.5+ tires, and you’ve got a playful dirt shredder. Set up 29+, the Voytek would make for a light and fast bikepacking rig. Heck, you could even install regular 29in. wheels and tires and race it cross-country in the summer.

Seeing the Voytek in person will give you a hint as to its ride quality — its carbon frame, which is made overseas, is composed of huge, squared-off tubes. The down tube, in fact, looks nearly wide enough to be its own mudguard, and the bottom bracket junction is especially burly. The ride is, um, stiff. Fat tires can hide that characteristic, but only to an extent.

Trundling leisurely on a smooth path, the Voytek feels like, well, a slow bike. Turn sharply on pavement and the tire will want to keep on turning. It’s mildly alarming at first, but you get used to it, and this weird auto-steer is only noticeable on a paved surface, which is not this bike’s department. The Voytek wants to go fast on singletrack, and it doesn’t much care whether that trail is covered in snow or not.

Get on a trail and turn up the juice, and the beefy frame starts to make sense. The Voytek is rigid enough that it will beat you up a bit on rough trail, but the flip side is that it accelerates with alarming rapidity. The first time I stood up to pedal on this bike, I thought it was going to scoot right out from under me. The power transfer is immediate, not unlike a carbon road bike. It’s an odd feeling having that kind of responsiveness on a bike with huge, squishy rubber. It’s unnatural, and a little naughty. I like it.

I spent most of my time with the Voytek set up as a fat bike. With 70mm wide rims and Terrene Wazia 26 x 4.0in. tires set up tubeless, the Otso was light and snappy. I managed to squeeze in a few rides on dirt before the snows came, and I was amazed at how much fun fat biking on snowless singletrack can be. The Wazia tires provided a low, soothing rumble, and their grip was endless — I came close to hurting myself once trying to induce a powerslide with some body English and copious rear braking, only to find that the tires weren’t ready to give up. Oops.

Sliding on snow was easier. So much so, in fact, that I burned a lot of energy just holding on for dear life. Which, really, is where the fun is at. Even with big, grippy tires, the combination of hubris and flying downhill at Mach chicken often resulted in me coming to an abrupt halt in a pile of snow. Thankfully, snow is soft, so my natural reaction was to laugh hysterically and do it again. Alex Strickland, editor-in-chief of Adventure Cyclist, analogized fat biking brilliantly with driving a slow car quickly: the limits of adhesion are so low that you can maximize your fun without breaking the speed limit.

The fellows at Otso were kind enough to send me a second wheelset with the Voytek, 29in. wheels with 40mm rims and WTB’s excellent Ranger 3.0in. tires. I used the 29+ setup primarily for dirt — I received the test bike last fall, just in time for some late-season mountain biking on tacky trails. In 29+ mode, the Voytek was an absolute blast on tight, twisty singletrack. I even cleaned a big root step-up that had been giving me trouble on my full-suspension mountain bike. Traction was a deep, bottomless well, and it took me a few rides to come to grips with just how far I could push the bike. 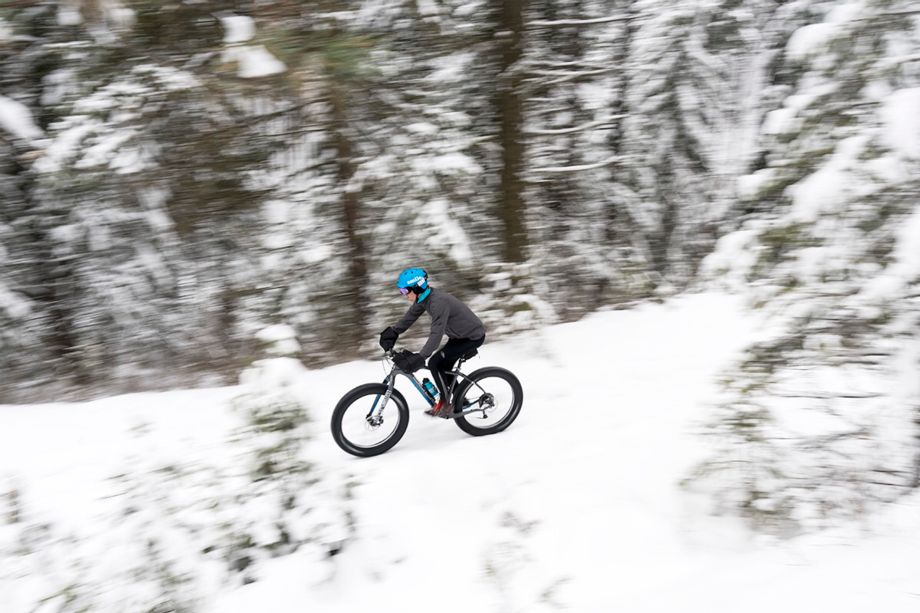 I didn’t have the chance to take the Voytek on a bikepacking trip, but with a sizeable main triangle, accommodations for three bottle cages, and mounts under the top tube for a bolt-in framebag, the Voytek is built with four-season adventures in mind. There are even mounting points for a bolt-on mudguard on the down tube, just in case you want to keep your chinos clean. 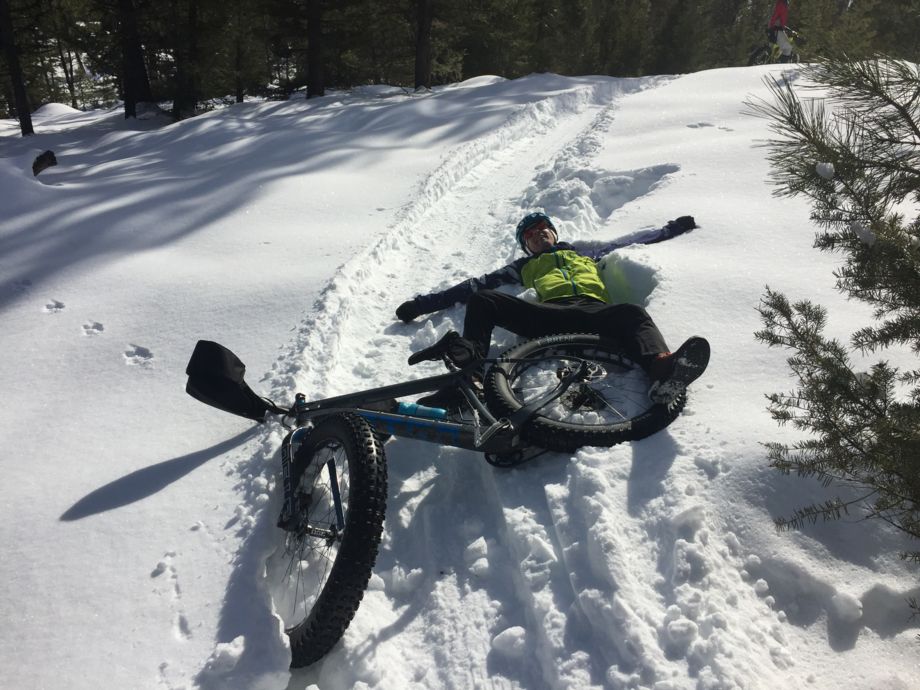 When riding the Voytek on snow, I’d often have to put my foot down for one reason or another, stepping into deep snow and introducing my nethers to the bike’s top tube. Otso made a clear-eyed decision to sacrifice a little standover height for a larger front triangle, which offers a more voluminous framebag. Personally, I’d gladly trade a smaller framebag for a better chance at procreating. I should note that the large was the proper size for me, and I wasn’t in between sizes. A partial solution to the standover issue to add a dropper seatpost, which I believe should be mandatory on any bike this capable. The Voytek features routing for a stealth dropper, but surprisingly, Otso doesn’t currently offer one as an add-on. Dittmer assured me that they’ll work with any customer who considers a dropper a must-have.

In the spec in which it was delivered to me, the Voytek has an old-school, cross-country feel to it, especially with the Tuning Chips in the shortest position. It’ll keep you awake on a technical trail, that’s for sure. Were it my bike — and I wish it were, my non-existent children’s college fund be damned — I’d make a few changes to slacken things out and give it more stable handling, such as a wider handlebar, a slightly shorter stem, a suspension fork, and wider tires (and a dropper, see above).

The Voytek came with up-to-date Shimano XT components, most of which worked brilliantly, but there was one incident during a particularly cold evening ride when the brake levers barely moved. They still slowed the bike down, but it was unnerving. I attributed this problem to the fact that mineral oil’s operating temperature isn’t ideal for very cold rides. DOT fluid, which SRAM uses in its braking system, has a lower operating temp, but if you’re planning on using the Voytek for Arctic expeditions, ask Otso nicely for mechanical disc brakes. They’ll accommodate you. 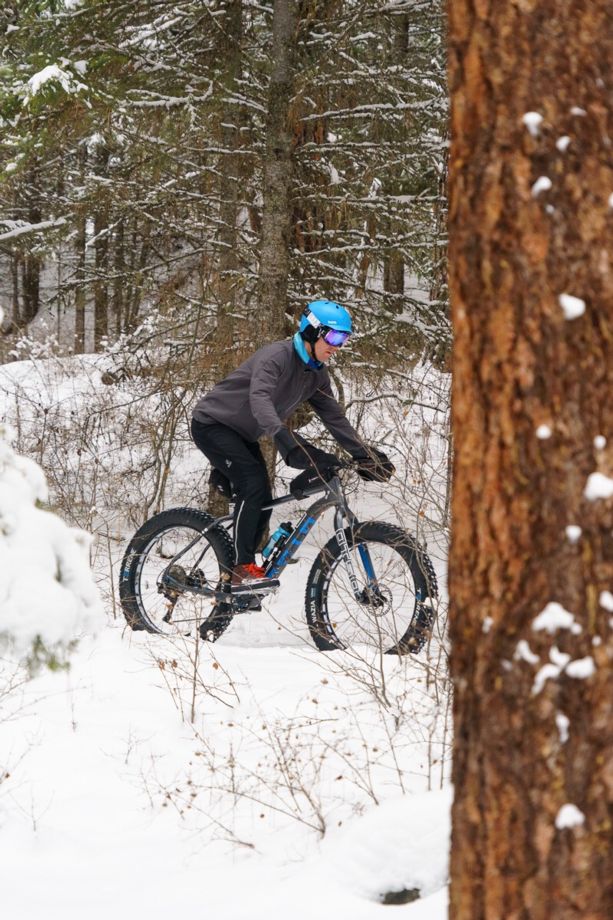 I feel pretty safe in saying that yes, this joyful warrior is for you. Mountain biking? It’s a riot. Bikepacking? You’re good to go. Casual fat biking? It’ll be the easiest bike to toss in your buddy’s truck. Fat bike racing? Considering how incredibly stiff — not to mention light — the frame is, racing might be this bike’s calling.

“Quiver killer” is an overused phrase I try to avoid, but it seems apt with regard to the Voytek. When you consider its price, though — starting at just under $4,000 — and the fact that you’d have to buy another wheelset and maybe a suspension fork in order to approach that vaunted status, the proposition seems less enticing. You could instead buy a $1,500 mountain bike and a $1,500 fat bike and spend your savings on tires and artisanal toast, but neither of those bikes will have the special Otso sauce.

That nice, narrow Q Factor is exclusive to the Voytek. Rocky Mountain’s Suzy Q comes close at a 192mm Q Factor, and a couple of steel adventure bikes — the Crust Scapegoat and the Tumbleweed Prospector — sport 73mm threaded bottom brackets for narrower Q Factors, but they both max out at 4.0in. tires. And you won’t find a mid-priced mountain bike with the rigidity and power transfer of the Voytek’s carbon frame.

It’s not cheap, but considering its versatility and its ability to slap a big, snow-plastered grin on your face, it’s very nearly a bargain.

Dan Meyer is the New Products Coordinator for Adventure Cyclist magazine, a former Marine, and crashed many times during the testing of this bike.

Fat bikes - snow or sand. My Salsa Deadwood covers everything else, far better...