In the fall of 2013, as part of our regular reprint schedule, we updated and converted section 4 of the Southern Tier Bicycle Route map set to Geographic Information Systems (GIS). At this time we also implemented a 160-mile reroute of section 4 of the mapset to avoid a road on which cyclists felt unsafe riding.

Bruce Porter, a long time Adventure Cycling member and Austin resident, offered to do the research to create a new route directly through the city of Austin. Bruce went above and beyond by creating a new, 160-mile stretch between Ingram and Bastrop through the heart of Austin. This new route eliminated the need for an alternate route through Austin and allowed us to get away from a narrow and winding stretch of road west of Austin through Wimberley. We also got to take advantage of some great new bike facilities in the Austin area. 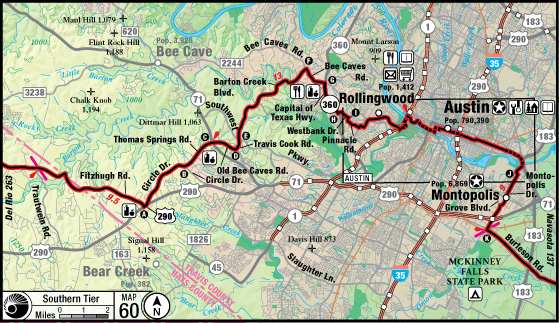 When we do a major re-route primarily for safety concerns, we want to make sure that cyclists get these new maps as soon as possible. For example, two years ago, when a safety issue in North Dakota spurred a major reroute on the Northern Tier and Lewis & Clark routes, we offered replacement map sections to cyclists who had purchased those route maps previously, based on their date of purchase.

Our sales department is contacting cyclists who purchased map section 4 of the Southern Tier between February 2013 and September 2013 to offer them a replacement map.

If you purchased this map between November 2012 and January 2013 (up to 11 months prior to publication of update), contact us to request a complimentary PDF of the map section delivered via email. If you require a print version of the updated section 4, you will need to purchase it from Cyclosource.

In general, if a reroute occurs specifically because of safety issues, Adventure Cycling offers the following map replacement policy:

Please email Cyclosource for a replacement map. The address is cyclosource@adventurecycling.org

Thanks for making the improvements. The 2013 Southern Tier van supported tour rode through Austin; it is well worth a visit.