January 17, 2018 - Morgan Lommele manages the joint partnership between the Bicycle Product Suppliers Association and PeopleForBikes to improve access for people who want to ride electric bicycles. 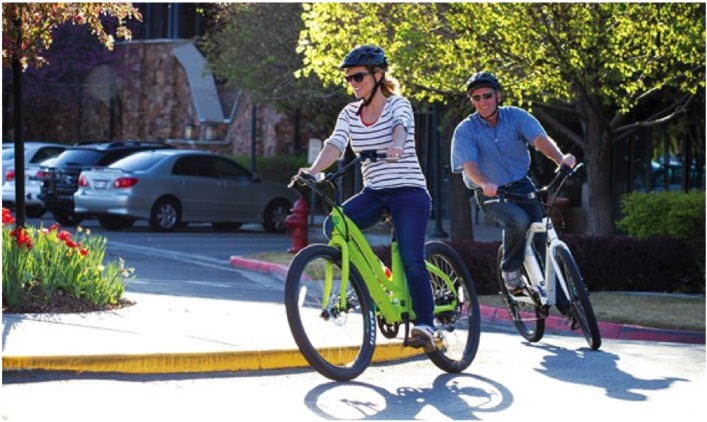 Electric bicycles (eBikes) are quite similar to traditional bicycles, but have a low-speed electric motor that provides a pedal-assisted or throttle-assisted boost of power. They extend the range of trips where a bicycle can be used, extend the range of any ride, allow current bicycle users to bike more often and farther, and provide a new recreation option for people who want to bike. eBikes vary widely in terms of shape and size — commuter, cruiser, cargo, touring, fat bike, mountain bike, tandem, recumbent, and others. These low-speed eBikes are as safe and sturdy as traditional bicycles, and move at similar speeds.

There are three classes of eBikes currently in the marketplace:

3. What makes eBikes different than motor bikes, since they both have motors?

eBikes resemble traditional bicycles in both appearance and operation, with a small electric, emissions-free motor no greater than 750 watts (one horsepower, equivalent to the power of a hair dryer). Mopeds, scooters and other motorized vehicles have a much greater power output and are generally internal-combustion-engine vehicles with emissions and associated noise.

4. Is it easy to tell if someone is riding an eBike vs a regular bike? Are they faster or noisier than normal bicycles?

eBikes have a battery that is generally visible on the down tube. This is usually the only indication that someone is riding an eBike. Apart from a low humming from the eBike motor, eBikes do not make noise.

Speeding on eBikes has yet to be identified as a significant problem. The research is mixed and somewhat inconclusive thus far with regards to the typical speed of eBikes and how much that differs from traditional bicycles. Clear signage and public etiquette education are the best ways to encourage all trail users to travel at safe speeds. 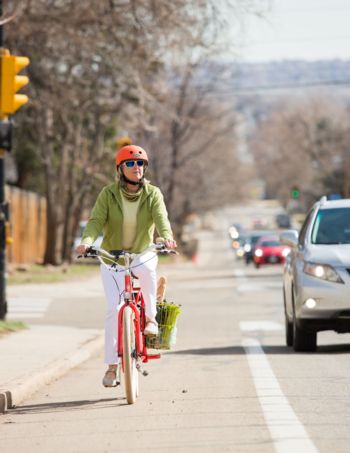 5. Where are eBike users allowed to ride, and where are they restricted? Is this changing?

In states that have passed the three-class system and in states where eBikes are defined as bicycles in the state’s vehicle and traffic laws, eBikes are generally allowed to ride wherever a traditional bicycle is allowed. Each state has its own traffic laws, so it’s best to consult your state’s eBike laws to understand where an eBike can ride and where there are restrictions. There is an effort to streamline eBike laws in all 50 states so that in the future, eBike laws are clear and consistent across states.

6. Is eBike use growing? How many people ride eBikes in the U.S.? How many in Europe?

A 2014 eBike industry analysis estimated about 210 million eBike users worldwide, and 200,000 sold in the U.S. that year, a number that is growing significantly each year. In the U.S., eBikes have seen the largest sales increase of any bike type. In 2017, eBike sales grew by about 75% in dollars and volume over 2016 (through traditional bicycle retailers). Asian and European eBike markets are more robust, and in 2014 were estimated at 25 million and 7 million eBikes, respectively. Most major U.S. bicycle brands sell eBikes, and bicycle manufacturers have moved or are positioning themselves to move to the U.S. to capitalize on the growing market.

7. Do eBikes expand opportunities for people who wouldn’t normally ride a bike to ride? Who is typically drawn to ride an eBike?

Reasons for purchasing an eBike vary, with some looking for an inexpensive and more sustainable commuting mode and others looking for a less physically demanding bicycle option or help bicycling through hilly areas. eBikes may also provide a more attractive and feasible choice to take short trips.

Generally, the two biggest groups of eBike riders are those in the 45–65 age range (due to both physical limitations and more disposable income for an eBike price tag) and those in the 25–35 age range (people living in urban areas who seek an alternative transportation option). eBikes also provide a new transportation and recreation option for people with mobility limitations.

8. What are down-sides/challenges to eBikes? Have there been issues related to differing speeds on bike paths or other types of conflicts between trail users?

There is concern among many in the U.S. that when used on multi-use pathways, eBike riders will travel faster than 20 mph under motor assist, jeopardize safety, and impact other trail users’ enjoyment. Since eBike riders typically travel similarly to traditional bicyclists, these concerns are disproved once eBikes enter the “mix” of trail uses. Some studies have already been performed that evaluate how eBike and bike riders interact on trails. In Colorado, the City of Boulder studied eBike use on shared paths and observed minimal conflicts between trail users, no observed crashes, no negative verbal interactions, and safe passing.

However, some trail users (especially singletrack users) are concerned that allowing eBikes on non-motorized trails would open the trail up to either restricted access or further motorized use.

9. Can you ride an eBike across the country? What are some of the challenges you might encounter, if any?

eBikes are a great way to ride across the country, and there are more and more models available that have built in racks, touring equipment, and lights. In general, the wattage of an eBike is correlated with the load that it can safely carry. Some eBikes with higher wattage (750 to 1,000 watts) cans carry up to 500 lbs of cargo, but again, the features of each model vary.

The biggest challenge to eBike touring is battery life. Battery life varies depending on the make and model of the bike, but battery performance is improving across the industry. It would be advisable to bring a spare battery for longer rides, and keep the battery charger handy for recharging in the evenings (and, if camping, ensure that there is an available outlet). Although many bicycle dealers have trained staff to work on eBikes, ensure that there are shops along the way that could provide service and parts if needed.

Stop into any local bicycle dealer that stocks eBikes, and inquire about trying an eBike! There are also eBike demo tours available in some cities.

Morgan Lommele manages the joint partnership between the Bicycle Product Suppliers Association and PeopleForBikes to improve access for people who want to ride electric bicycles. This work involves coordinating strategic state-by-state advocacy campaigns; representing the bicycle industry in policy negotiations; building relationships with and between policy makers, non-profits, academia, and industry partners; and tracking electric bicycle-related legislative and policy issues. Morgan holds B.A.s in International Affairs, Sociology and German from the University of Colorado; and a M.S. in Environmental Policy and Management from the University of Denver.

Have more questions about eBikes that weren’t answered here? Comment below and we’ll find the answer. Thanks Morgan for sharing your expertise!

I am thinking of getting an Orbea Gain ebike. Does adventure cycling allow such an ebike on all of its tours? Are there issues with shipping an ebike in the US or shipping it by air overseas?

Happy (almost) new bike day! We only allow e-bikes on some of our fully supported tours. A list of e-bike friendly tours is available here: https://www.adventurecycling.org/guided-tours/great-tours-for-ebikes/

As far as shipping a bike, have a look at this page on BikeFlights as a resource: https://www.bikeflights.com/electric-bicycle-shipping

Regarding flying with them as carry-on or checked luggage, I was not able to find any official word from authorities on e-bikes specifically. However, I found a couple of helpful articles from the FAA and TSA that pertain to batteries:

Hope these are helpful!

The speed on the local trails where i live is 15 mph. However, this is often ignored by those riding regular bicycles out for a training. That aside, i am becoming a member of the ebike crew. I pick up my ebike in early October. Although my commute to work is 45 miles round trip and takes anywhere from 1.75 hours to 2.5 hours one way, i look forward to the commute on my ebike. I also look forward to bicycle touring around the country once I retire. Anyway, did I tell you I am a lifetime member of Adventure Cycling. I have been riding a bicycle since about 3rd grade, have done bicycle touring on three continents, and am a senior olympian in the triathlon. I went with an ebike due to health reasons. Happy trails.

Hi Patricia, glad to hear you are finding the inspiration and means for staying on a bike! Thanks for being a Life Member. We appreciate you! Have fun out there.

When we lived outside Sacramento CA we used to ride in the path that went from downtown Sacramento to Folsom. There was a 15 or 20mph speed limit posted that was regularly ignored by what appeared to be pacelines of bicyclists. They didn't slow down for curves or poor visibility, small children, pedestrians, or crowds of users. We stopped going to the trail for a relaxing off-road ride.

Unfortunately, mode of transportation is not a predictor for which people follow the rules, and I think that goes for any type of bicyclist as well - e-bike or traditional bikes, as you pointed out.

I was struck by the concerns related to the use of eBikes on leisure paths. I suspect that part of the issue relates to public perception and confusion between a genuine battery-assist bike and mopeds/scooters with (unuseable) pedals attached in order to circumvent licensing, insurance and operating rules. I have yet to be challenged when riding my eBike on the extensive network of paths in my city, and have also had the pleasure of using an eBike in France, where many municipalities offer "green" subsidies for their purchase.

I am glad you brought up those who would circumvent the rules... Unfortunately; there will always be those that try to skirt the rules to get the most they can out of any situation. I am getting a BES Ebike for my birthday in one month and am super stoked about how my life is going to change for the healthier, and more fun! I just hope I don't run into too many situations where people bending rules makes my life a bit more dangerous of unpleasant.