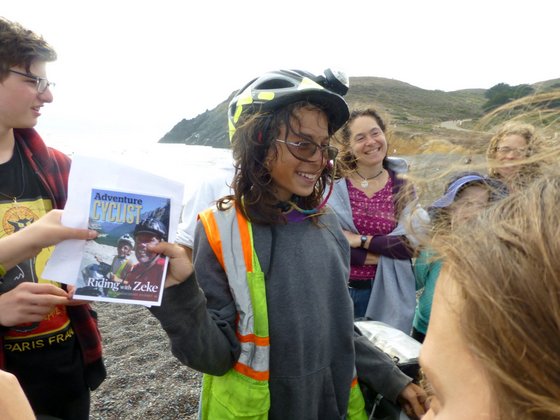 On Wednesday, August 19, Zeke Gerwein dipped his front tire in the Pacific. He had pedaled over 4,300 miles and raised over $4,000 for the Sierra Club. Thousands of cyclists have accomplished this crossing, but few at such an early age.

Because Zeke is underage, he had an adult cycling with him throughout his journey. Margaret, Lindsey, his grandfather, and his dad all cycled portions of the cross country journey with him. I cycled the last segment from Zion National Park to the Pacific.

Family, friends, and supporters gathered at Rodeo Beach to celebrate Zeke's tire dip. I presented Zeke with a card from the Adventure Cycling Association, congratulating him on his accomplishments, and gifting him a membership good until he is twenty-one.

It has been a pleasure and an honor to get to know and spend time with this extraordinary young man.

The day after our final ride, I lounged by the pool with family in Sacramento, CA ... while Zeke left to climb Mt. Whitney with his grandfather.

Want to know more about Zeke? Here are two articles I wrote about him for Adventure Cyclist magazine.
Part 1: A Strange Request (pdf)
Part 2: Extraordinary (pdf)

What an incredible story and accomplishment. Congrats to all!